Japan Air Lines flight 1628 was a UFO incident that occurred on November 17, 1986 involving a Japanese Boeing 747 cargo aircraft. The aircraft was en route from Paris to Narita International Airport, near Tokyo, with a cargo of Beaujolais wine. On the Reykjavík to Anchorage section of the flight, at 17:11 over eastern Alaska, the crew first witnessed two unidentified objects to their left. These abruptly rose from below and closed in to escort their aircraft. Each had two rectangular arrays of what appeared to be glowing nozzles or thruster's, though their bodies remained obscured by darkness.
Japanese Airlines Flight 1628: on November 17, 1986 JAL 1628 - a 747 cargo flight carrying wine from Paris to Tokyo - was flying over Alaska when the three-person crew, led by Captain Terauchi, saw an extraordinary craft, whose size they described "as large as two aircraft carriers." The craft was the shape of a walnut and included smaller craft flying around the "mother ship".

Below is the same type of aircraft involved with the UFO sighting; 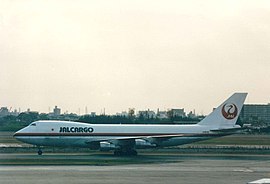 Japan Air Lines flight 1628 was a UFO incident that occurred on November 17, 1986 involving a Japanese Boeing 747 cargo aircraft. The aircraft was en route from Paris to Narita International Airport, near Tokyo, with a cargo of Beaujolais wine. On the Reykjavík to Anchorage section of the flight, at 17:11 over eastern Alaska, the crew first witnessed two unidentified objects to their left.


These abruptly rose from below and closed in to escort their aircraft. Each had two rectangular arrays of what appeared to be glowing nozzles or thruster's, though their bodies remained obscured by darkness. When closest, the aircraft's cabin was lit up and the captain could feel their heat on his face. These two craft departed before a third, much larger disk-shaped object started trailing them, causing the pilots to request a change of course. Anchorage Air Traffic Control obliged and requested an oncoming United Airlines flight to confirm the unidentified traffic, but when it and a military craft sighted JAL 1628 at about 17:51, no other craft could be distinguished. The sighting of 50 minutes ended in the vicinity of Mount Mckinley. 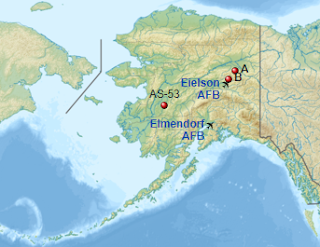 Locations of the Flight 1628 and subsequent incidents The first stage of the sighting occurred from point A to B, where two objects were observed. Two and a half months later, Flight AS-53 recorded an unidentified object near McGrath, and a military plane observed an object between Elmendorf and Eielson air force bases.

On November 17, 1986, the Japanese crew of a JAL Boeing 747 cargo freighter witnessed three unidentified objects after sunset, while flying over eastern Alaska. The objects seemed to prefer the cover of darkness to their left, and to avoid the brighter skies to their right.


At least the first two of the objects were observed by all three crew members: Captain Kenju Terauchi (Japanese: 寺内謙寿), an ex-fighter pilot with more than 10,000 hours flight experience, in the cockpit's left-hand seat; co-pilot Takanori Tamefuji (為藤隆憲) in the right-hand seat; and flight engineer Yoshio Tsukuba (佃善雄). The routine cargo flight entered Alaska on auto-pilot, cruising at 565 mph (909 km/h) at an altitude of 35,000 ft (11,000 m). At 17:09, the Anchorage ATC advised a new heading towards Talkeetna, Alaska. 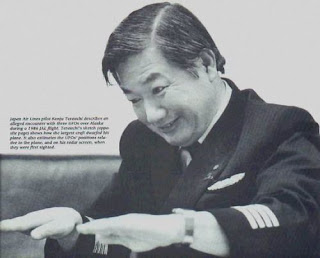 Two objects
As soon as JAL 1628 straightened out of its turn, at 17:11, Captain Terauchi noticed two craft to his far left, and some 2,000 ft (610 m) below his altitude, which he assumed to be military aircraft. These were pacing his flight path and speed. At 17:18 or 17:19 the two objects abruptly veered to a position about 500 ft (150 m) or 1,000 ft (300 m) in front of the aircraft, assuming a stacked configuration. In doing so they activated "a kind of reverse thrust, and [their] lights became dazzlingly bright". To match the speed of the aircraft from their sideways approach, the objects displayed what Terauchi described as a disregard for inertia: "The thing was flying as if there was no such thing as gravity. It sped up, then stopped, then flew at our speed, in our direction, so that to us it [appeared to be] standing still. The next instant it changed course.


In other words, the flying object had overcome gravity." The "reverse thrust" caused a bright flare for three to seven seconds, to the extent that captain Terauchi could feel the warmth of their glows. Air traffic control was notified at this point (at 17:19:15), who could not confirm any traffic in the indicated position. After three to five minutes the objects assumed a side-to-side configuration, which they maintained for another 10 minutes. They accompanied the aircraft with an undulating motion, and some back and forth rotation of the jet nozzles, which seemed to be under automatic control, causing them to flare with brighter or duller luminosity. Each object had a square shape, consisting of two rectangular arrays of what appeared to be glowing nozzles or thrusters, separated by a dark central section. Captain Terauchi speculated in his drawings, that the objects would appear cylindrical if viewed from another angle, and that the observed movement of the nozzles could be ascribed to the cylinders' rotation. The objects left abruptly at about 17:23:13, moving to a point below the horizon to the east.

Third object
Where the first objects disappeared, Captain Terauchi now noticed a pale band of light that mirrored their altitude, speed and direction. Setting their onboard radar scope to a 25 nautical miles (46 km) range, he confirmed an object in the expected 10 o'clock direction at about 7.5 nmi (13.9 km) distance, and informed ATC of its presence. Anchorage found nothing on their radar, but Elmendorf's NORAD Regional Operations Control Center (ROCC), directly in his flight path, reported a "surge primary return" after some minutes. As the city lights of Fairbanks began to illuminate the object, captain Terauchi believed to perceive the outline of a gigantic spaceship on his port side that was "twice the size of an aircraft carrier". It was however outside first officer Tamefuji's field of view. Terauchi immediately requested a change of course to avoid it.[4] The object however followed him "in formation", or in the same relative position throughout the 45 degree turn, a descent from 35,000 to 31,000 ft, and a 360 degree turn. The short-range radar at Fairbanks airport however failed to register the object.[3] Anchorage ATC offered military intervention, which was declined by the pilot, due to his knowledge of the Mantell incident. The object was not noted by any of two planes which approached JAL 1628 to confirm its presence, by which time JAL 1628 had also lost sight of it. JAL 1628 arrived safely in Anchorage at 18:20.

Captain Terauchi cited in the official Federal Aviation Administration report that the object was a UFO. In December 1986, Terauchi gave an interview to two Kyodo News journalists. JAL soon grounded him for talking to the press, and moved him to a desk job. He was only reinstated as a pilot years afterwards, and retired eventually in north Kanto, Japan. Kyodo News contacted Paul Steucke, the FAA public information officer in Anchorage on December 24, and received confirmation of the incident, followed by UPI on the 29th. The FAA's Alaskan Region consulted John Callahan, the FAA Division Chief of the Accidents and Investigations branch, as they wanted to know what to tell the media about the UFO. John Callahan was unaware of any such incident, considering it a likely early flight of a stealth bomber, then in development. He asked the Alaskan Region to forward the relevant data to their technical centre in Atlantic City, New Jersey, where he and his superior played back the radar data and tied it in with the voice tapes by videotaping the concurrent playbacks.