The International Space Station had an unexpected visit from a UFO and it didn't seem to bother NASA. It only happened in May 2021. NASA knows Aliens.

The International Space Station is once again, yet a, gain, in the spot light because a triangle shaped object "as clear as the daylight", flies right past the orbiting behemoth.

NASA it seems is without a care in the world or erm, should I say space!

Until you investigate the hundreds of UFOs that have passed by the ISS, you'll maybe never understand how blatant it is that NASA is ignoring these UFOs and they're doing it on purpose. Because I read up on UFOs everyday and I have done for years, this is why I find it so hard to believe that they don't know about these UFOs. I don't care if it's only one person's opinion that these are UFOs, but what else would you call this image? 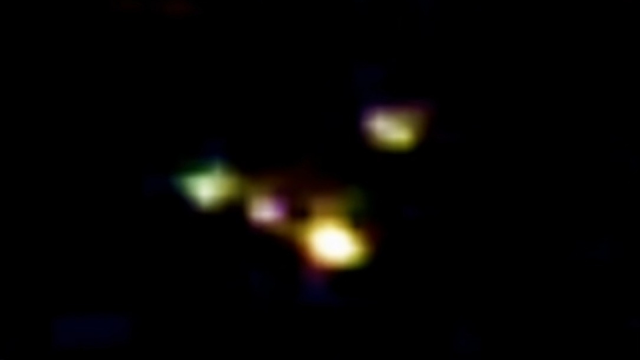 Credit: Scott Waring YouTube video/NASA/ISS Live Feed/IBTimes/UFO Sightings Footage/UFO News/Canva.
What makes this different is that this is a triangle UFO - but in space, we're all used to seeing these 3 pointed Extraterrestrial crafts in our own atmosphere and that's why seeing it here fly past the International Space station probably in excess of 7.66 km/s and that's kilometres per second which anyone will understand that travelling faster than 7.66 kilometres per second is absolutely stunning! Let's be honest, that UFO Triangle is proper gunning it to the point where it's more than likely the fastest "object" around the Earth on that day!

Credit: Scott Waring YouTube video/NASA/ISS Live Feed/IBTimes/UFO Sightings Footage/UFO News/Canva.
Sometimes it takes a mind blowing event just like this which puts thing's into perspective because seeing the views from the space station regularly, it's very easy to lose some of the basic facts! For one, it's space which is endless in every single direction you decide to point in. 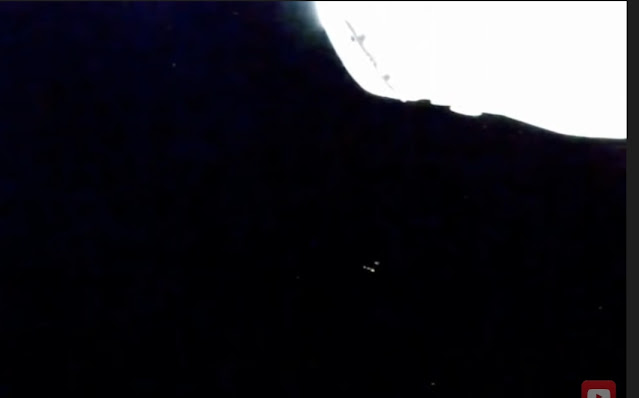 Credit: Scott Waring YouTube video/NASA/ISS Live Feed/IBTimes/UFO Sightings Footage/UFO News/Canva.
Can you see the triangle shape UFO in this screenshot directly from the video (above)., it's really small but it's definitely there as we can see with the zoom in.
For two, it's travelling faster than a bullet which is only 2.600 feet per second so compared to the ISS travelling at 7.66 kilometres per second, what really should be looked into is why it's so easy to forget that the huge space station which is 356 feet (109 meters) end-to-end by the way can travel that fast without breaking apart.
It's got to do with basic principles. Space hadn't got an atmosphere so there's nothing to drag or push through and It's a vacuum. And three, well just been in space is an absolute privilege and seen as though just a handful of people have actually been there compared to all mankind, it's pretty epic stuff no matter how it's looked at, we just easily forget that.
After seeing this UFO video for the first time I'm literally saying out loud to myself but not shouting it out loud lol, the letters omg! I'm spelling out the word "again" as well. NASA seems to be the receptionist of space Aliens travelling to Earth.
There's that many UFOs flying past the ISS and so close to it that you'd be forgiven for thinking that these UFOs where actually signing in or just checking in with their Earthling counterparts to give them the head's up that they've arrived. And yes that would imply that the Earthling's knew about their immediate arrival?
And that wouldn't surprise me much or if at all. Anyway...
Scott Waring, the brilliant and unafraid guy whose not afraid to speak his mind on Ufology, Ancient Aliens and conspiracy theories has brought us this amazing triangle UFO and also he's brought it to the attention of NASA.  But I'm guessing that even Scott Waring is frustrated by the sheer lack of or willingness on NASA's part to even look at the constant stream of UFOs passing by the ISS.

How do you channel this frustration caused by a so-called respected institution like NASA? Ignoring all these UFOs flying past the ISS on live TV no less, is a brutal betrayal and it's being played out on live TV.

Because it's wearing really thin. The fact that something has flown past the Space station is easy enough to get our heads around but what beggar's belief is NASA ignoring it, the media outlets leading the world on gossip totally ignore it but 9nly because they've (the media outlet owners) have been told to ignore it and it drifts down to the journalists and they ignore them.
Here's the full awesome video:
Please share your thoughts and opinions on this unusual triangle shaped object right by the ISS. Also please share this post, I'd really appreciate it, thanks guy's.
Credit: Scott Waring YouTube video/NASA/ISS Live Feed/IBTimes/UFO Sightings Footage/UFO News/Canva.