San Diego CA USA saw lot's of UFOs over the Pacific coast. It was filmed from different angles by a few people. The sighting's definitely happened.

This was uploaded to YouTube only 8 day's ago (3rd October 2022) showing 2 UFOs and the 5 more over the Pacific coast.

These UFOs are caught by different people in different areas as well - so we know that they definitely have happened, possibly? 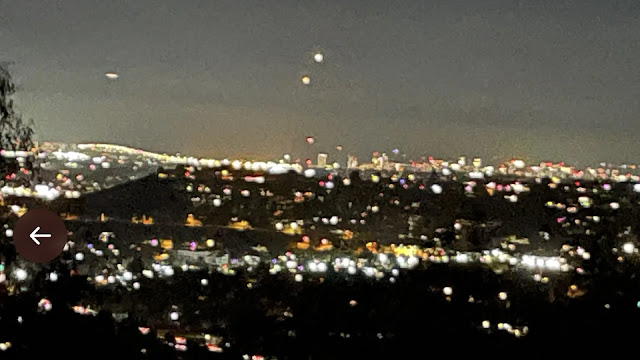 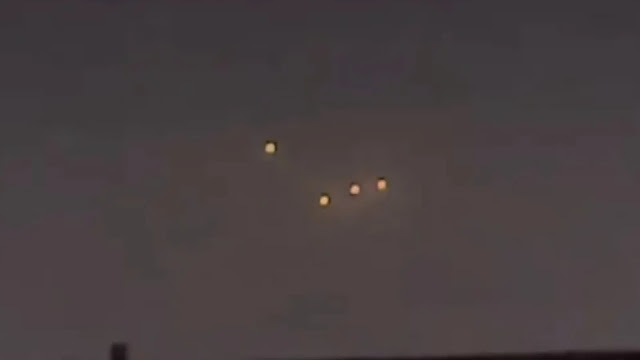 Sometimes Ufology comes under more scrutiny and it's definitely put under the microscope more often now than ever and rightly so because of the UFO hoaxes.

There's always something new (which is great) happening throughout the world, somewhere there's probably one happening right now... That's what happened with this UFO encounter and more than one person caught them on camera.

Somehow UFO hoaxes don't need the same investigation because usually people just decide it's a fake UFO sighting and that's it, it's fake.

Sightings can definitely be verified as actually taken place but they need a lot more than observation. It's up to the people who post about these UFO sightings to find out what they can regarding the specific UFO sighting and as much as they can?

This UFO sighting was filmed from different angles according to the journalist's (that's a bonus) and it's been reported on by a large news agency also lending to it's credibility... It was filmed just after 9pm and north of Crystal Pier, Pacific Beach. The witness says that they appeared out of thin air and stayed around for around 15 minutes in total.

The weird lights are back!! Over San Diego Bay!! pic.twitter.com/C61oDZMbiU

It also really helps that the US Government has released numerous UAP videos and because of this we now know that they are real.

But again, is this one?

The video starts off with Marcella Lee TV journalist asking "what could they be" and if we cast our collective minds back to say the year 2000, you'll see a huge difference between the leading stories of then to now. The introduction of a UFO sighting back then was akin to introducing a comedian.

And, the demeanor of the TV journalist was never an inquisitive one. It was nearly always a dog at the person who reported the UFO sighting! Because 22 years ago they were unforgiving, they was rude, obnoxious and cruel - plus definitely rude and no apology is forthcoming!

But if we fast forward to now in the year 2022, they're all smiles and introducing the segment as a "puzzle to be solved" or as a serious investigation segment by their top journalist's! As opposed to the disgusting behaviour of two decades ago, they even have journalist's out on the scene reporting live.

Don't get me wrong, it's a truly brilliant step in the right direction but I, like many other people remember that it was not always like that! It used to be humiliating from one day to the next. That was standard practice "because they didn't understand it" but now they (TV news stations) have a clear guideline on UFOs and the UAP disclosure videos was instrumental in bringing about change. UFOs was brought out of the shadows and it's definitely a good thing.

UFOs are real, it's accepted by the US Government as real life facts and a standard to go from, now.

We can say "UFOs are real and produce numerous UAP videos" you need to read this (below). I'll be sharing the link to the Wikipedia page for the source of the information, which I suggest you read:

The videos, featuring cockpit display data and infrared imagery, along with audio of communications between the pursuing pilots, were initially provided to the press by Christopher Mellon, the former Deputy Assistant Secretary of Defense for Intelligence. Around the same time, Luis Elizondo, the director of the Advanced Aerospace Threat Identification Program, had resigned from the Pentagon in October 2017 to protest government secrecy and opposition to the investigation, stating in a resignation letter to Defense Secretary James Mattis that the program was not being taken seriously.[15] According to Wired magazine, a copy of one of the videos had been online, in a UFO forum, since at least 2007.[16] In September 2019, a Pentagon spokeswoman confirmed that the released videos were made by naval aviators, and that they are "part of a larger issue of an increased number of training range incursions by unidentified aerial phenomena in recent years".[17] On April 27, 2020, the Pentagon formally released the three videos.

The time line of event's are a curious one. Before the video's where admitted to by the US Government there was one guy a journalism professor "Keith Kloor" saying that and I quote:

Well, here we are in 2022 and this professor of journalism totally got it wrong, he backed the wrong pony. So, what was his actual foundation for the misinterpretation of the information which I might add it was freely available to him if he wanted to know more, it was there all along? Lack of knowledge, lack of understanding of what's happening, lack of reasoning and or was it a lack of awareness regarding Ufology.

Or did he trust the Government's word more... You know, even though they've now done a U-turn?

UFOs do exist and here's the extraordinary evidence.

We had the latter because of the EVIDENCE people have been providing for decades. Ufologists already knew this and was trying to tell people, to tell the world about this all along. But all these "folk's" could do, was not be bothered to even look at the evidence.

That's where ignorance and nastiness get's you, it's called the know it all club, that when it was clubbed together they actually knew nothing! It's been decades in the making, "I'm taking this moment to say we told you so!"

Maybe some people really did believe that UFOs wasn't real? But all you had to do was be impartial, keep an open mind, to understand how corrupt and secretive Government's can be and you'd realize just like thousands of people did, just how much of a slam dunk believing in UFOs was? It was a no brainer is how I'd phrase it, lol.

I mean, all you needed was an open mind and you'd see just how one sided UFO evidence was, in favour. So, I put my money on my own reasoning and understanding of the UFO evidence, and wallah UAP disclosure happened and in my lifetime as well. It wasn't easy because as it just so happens, the rise of drones was pretty much side by side with the rise of UAPs. As Ufology grew, so did drones and call it whatever you want, but drones actually made it sometimes near on impossible to distinguish between the two!

The Nimitz to the rescue, like literally speaking it was the Nimitz encounter and the Theodore Roosevelt encounters with unusually shaped, fast moving aircraft's that came to the rescue as it was all caught on camera. But not just any old camera, we're talking about Infrared cameras.

Called the '5 observables' by a former Pentagon investigator, they include hypersonic speed, erratic movement and the ability to fly without wings.

So, where abouts do these UFOs live? Or, can we see them flying in the atmosphere or not? Are they there, but not there so-to-speak? Does that make them invisible?

When Luis Elizondo ran a small team at the U.S. Department of Defense investigating military-based reports of unidentified aerial phenomena (UAP), he heard numerous such accounts—by some of the most highly trained aeronautic experts in the military. They describe objects that appeared to be intelligently controlled, possessing aerodynamic capabilities that far surpass any currently known aircraft technology.

I'm not sure what or why it took so long for them to go public about the UFOs... Oh actually, wait a minute yes I do, it's because one of their own blew the whistle on their secrecy that Unidentified Flying Objects where and still are operating in the world and he (Louis Elizondo) couldn't effectively continue with his job because the people have a right to know. I personally don't know him but it seems from the number of reports and articles that I've read that this is the case, he was sick of lying to the public who in his eyes have a right to know what's out there?

So, how long has the US Government and it's military known about the UAPs? It's a fair enough question don't you think? But, it only seems like that because of a huge struggle that had taken place over decades and that's because if you asked that question about how long has the government known about UAPs, they used to either ignore it or totally deny UFOs existing citing there's no evidence. Even though:

On November 14, 2004, fighter pilot Commander David Fravor of the USS Nimitz Carrier Strike Group claims to have investigated radar indications of a possible target off the coast of southern California. Fravor said the operator had told him that the USS Princeton (CG-59), part of the strike group, had been tracking unusual aircraft for two weeks prior to the incident. The aircraft would appear at 80,000 feet (24,000 m) before descending rapidly toward the sea, and stopping at 20,000 feet (6,100 m) and hovering.[4] Fravor reported that he saw an object, white and oval, hovering above an ocean disturbance. He estimated that the object was about 40 feet (12 m) long.[7][4] Fravor and another pilot, Alex Dietrich, said in an interview that a total of four people (two pilots and two weapons systems officers in the back seats of the two airplanes) witnessed the object for about 5 minutes.

It's a strange thing because pilot's have been saying this same thing going back year's, even decades. So, what makes this different? What makes the Nimitz's UAP videos and the Theodore Roosevelt encounters different? Is it because it was planned to give the public this information or is it because it's taken one of their own investigators to quit saying, "I can't carry on lying to the public" then releasing UFO videos...

Which scenario would you like to believe is real? I'd like to think the US Government was going to give us all UFO disclosure in the first place. But in reality it did take Luis Elizondo releasing the UAP videos for the Government then to admit it.

And just so that you know, for future reference so-to-speak, the US Government was releasing a paper but added an additional addendum that states yes, there are more UAP videos but they cannot release them because they have national security concerns.

In other words, what we know about the UAPs already, there's more information about them that if it was known by the public "it'd be devastating." And that surely means we should know about it. To either protect ourselves better or to keep an eye out for the potential Extraterrestrial threat?

Here's the extraordinary video which was uploaded to YouTube by: