Another Ancient Evil Looking Skull Look's Unlike Anything Else

This is an ancient skull unlike anything else that I've seen. It looks evil and other skulls have strange features of ancient man Yunxian man China.

There's ancient skulls with elongated craniums and skulls without a sagittal sutures, now we have skulls with eye socket "wings" for want of a better word found in China.

We're all supposed to just accept this 1.1 million years old skull as our ancestor and that it's homo-erectus and yet they can't tell us how specifically old it is. 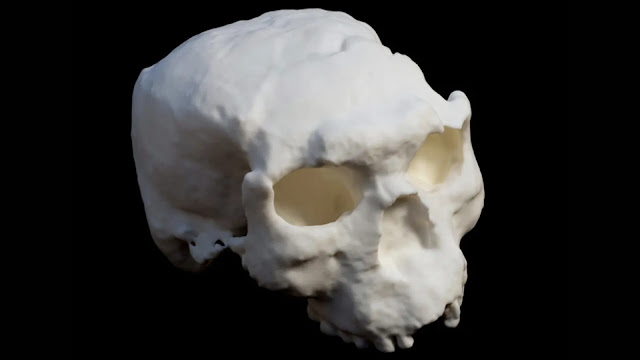 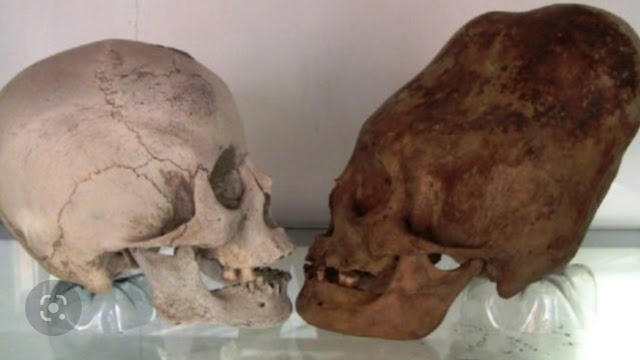 As far as the ancient theories of the missing link goes, it's hard to not think the worst when we see thing's like this bizarre skull and the scary eye sockets, because they are bizarre looking.
But before these "professionals" start introducing us to our ancestor's we should at least be given concrete evidence of us been related to them.

How many branches is there on the tree of life? They just keep on adding any old thing to it. They aged this from the mud around it. Even I know that mud settles, it moves and it turns to liquid with enough water.

Plus, I really don't want to be related to this (top image) skull... Because it looks evil. There's no right or wrong answer to anything in the ancient past relating to these skulls (except for the facts lol) because if archaeologists and scholar's are arguing about this and or debating whether they are from this time frame or that time frame? Then the who, the what, the when and the where all becomes blurred... 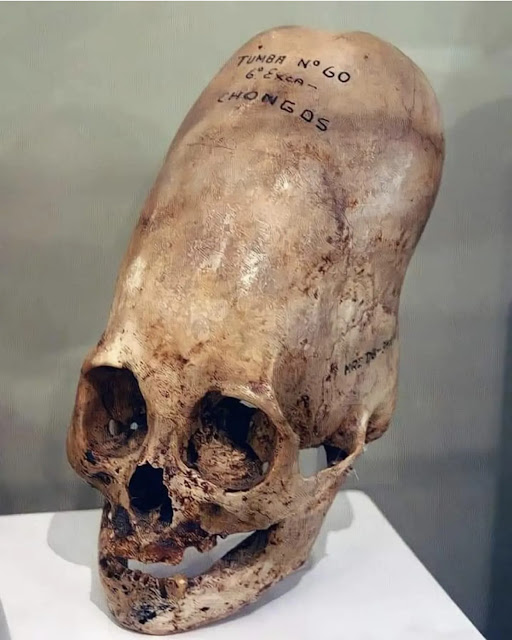 Elongated Skull from the Necropolis period (200 BC - 200 AD). This was posted here on Wonders Of The Past Quora. Near the town of Pisco, in a village called Chongos, in northern Paracas, were found so-called "cone heads" because of the way the skulls took on them.

There's many different types of theories out there and in this day and age you don't need to go with the official version because you are free to believe in whatever you want to!

Here's a quick quote from the Nature website regarding these most unusual discoveries;

A third ancient human skull has been uncovered at a site in China. A 3D reconstruction of the second skull, discovered three decades ago and called Yunxian 2, is pictured. Credit: Pascal Goetgheluck/SPL.

The whole point to the missing link is just that, there's a lot of human being's past that is totally unknown even though the results are real, the why and the who remains a massive question. This Chinese discovery comes along and the plot thickens almost. This is a 3D representation of what has been discovered. I wanted to highlight just what's been discovered around the world.

Here's the most important aspect of this whole story:

The discovery of Yunxian 3 therefore represents a unique opportunity to collect sediment samples from the ground that the skull sits in, he says. Dating of sediment and animal fossils from the site suggest that the Yunxian humans lived between 1.1 million and 800,000 years ago.

Because it's this which will ultimately tell us the story (as much as it can) of it's actual age. It's estimated at between 800,000 and 1.1 million years old.

There's been 3 of these skulls discovered in the same place in China. In fact here's the quote with specifics for you:

The skull was discovered on 18 May at an excavation site 20 kilometres west of Yunyang — formerly known as Yunxian — in central China’s Hubei province. It lies 35 metres from where two skulls — dubbed the Yunxian Man skulls — were unearthed in 1989 and 19901, and probably belongs to the same species of ancient people, say researchers.

Personally, my interest lay in the features of this amazing skull, the strangest looking skull you'll probably ever see which has been found to date. Although ancient elongated skulls exist without the sagittal suture, if we combine that with other bizarre features like this one and the elongation of the skull...

It amounts to a skull with no sagittal suture, elongation of the forehead and the eye's of this ancient skull! That's gonna make for the strangest looking skull. Apparently all those features and more have been interwoven in our ancient past eventually more came and the results are modern day mankind.

Some people subscribe to the Reptilian species theory being the missing link? Some subscribe to Alien Grey's being the missing link and some other people believe that we're all an ancient experiment, hybrid's and experiment's of the Nephilim, Anunnaki and some people believe that it's all a lie and we're in a simulation. And the UAPs that are here are surveillance drones from the being's that created humanity surveying us.

China has announced the discovery of a relatively well-preserved ancient human fossilized skull from the early Paleolithic period, believed to be the most intact specimen from homo erectus of that age found in inland Eurasia so far.

Look, it doesn't matter what you believe beit evolution, experimental, natural selection, or other Extraterrestrial influences? I suppose what matters is that we eradicate hate, war, poverty and equality is our main, Ney our only focus. Peace, love harmony is and always will be the only outcome if we want to go further in this reality because all other horrific ways ends in tragedy.

Here's a video of the Yunxian man bizarre looking skull:

Guy's, what's your thoughts on this bizarre looking skull and the other so-called skulls from the branches of life - on the tree of life? There's some strange skulls and are we a mix of these different continuously found skulls (how many more is there)? Or, are we from an ancient Nephilim, Anunnaki etc experiment. There's hybrids, part Alien Grey, from space, from inner Earth, part of or full Reptilian species? Let's not forget the evolutionary wonder theory of and the missing link?