Crab Creature on Mars In A NASA Photo

This is one of the best NASA Photos because it are showing that there is Aliens on Mars and that in some ways it looks like Earth creatures (Crabs).

OMG the Mars Alien PROOF We've all been waiting for and it's here now! 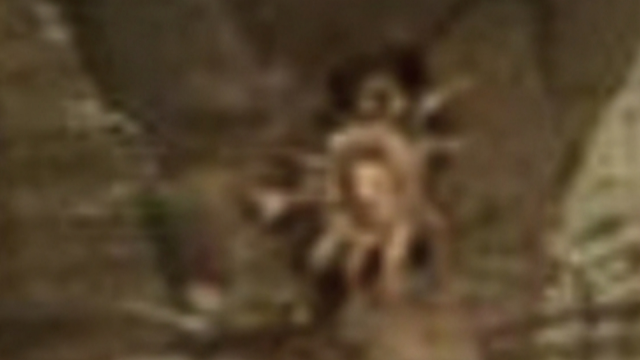 Credit NASA/Canva/UFO Sightings Footage.
This cant be the wind or a bit of swamp gas? This is in fact is a crab like critter. It's life on the red planet. Remember the face of Mars?

That's still there but has been blurred out by NASA so called scientists, more like professional liars. If you want proof just go on over to Wikipedia.

But knowing them, so and so's that they are they won't admit it - NASA that is? If you ask for an answer you get a fully pre prepared script from a team of spin doctors which depending on that specific day, you'll either get swamp gas, weather balloon, Chinese lanterns or a DIY rocket enthusiast?
How about this one for an excuse from NASA:
The UFO that you saw, you didn't see because we wear white coats and your just a pleb - plus it's Aliens, you must be crazy! Even though it is why we are in space, looking for Alien lifeforms.
But a member of the public will not beat NASA to confirming that Aliens exist as we've put trillions into it! You buy a camera and discover Alien life, no way its not happening.

And the penny finally drops!

Ok so I've covered lying scum bags, face on Mars, blurred out photos.. Oh yeah, "Crab like Alien" bug, on Mars. The phantom Crab. Why NASA release this stuff then totally deny it is absolutely beyond me?


Why not just don't release it in the first place? My theory is this;

NASA thinks either, we won't see it or they think we're stupid enough that it will go over our head's as a bit of Mars wind would? It relates to swamp gassy wind I suppose? The fart kind...


I have a whole host of images from Mars that show life once was on Mars. Skull and bones, huge structures and complexes, drilling sites, radar and or microwave dishes. There's monuments, structures of domes, domiciles, mechanical wheels, infrastructure, pipes and statues. All coincidences don't forget, paradolia they like to call it. Basically calling anyone who sees something that they didn't see it. Or, your seeing things that aren't there - silly. Lol, it's truly stupid.
Credit CCTV English.


So my final thought is this, Aliens once lived on Mars and that's why NASA, SpaceX and Bigelow, Blue Ocean and pink Floyd all have an interest in Mars. The bugs that are left behind are like cockroaches would be left on earth after a nuclear war wiped out humans? Or something like that, to be really honest with you I'm sick of having to defend my beliefs that Aliens are on Mars, the Moon and in our top atmosphere. If you don't believe it, stop reading it and leave it to the adults.

From The Express online
The alleged footage of the Martian food chain in action was filmed by the NASA Curiosity rover droid as it drilled into the surface to take samples. A clip has been made from the footage by YouTube channel Mars Alive, which seeks out evidence of life in NASA pictures and videos, alleging that it shows the small alien predator feeding on an even smaller creature.

The video, entitled "NASA What Has Curiosity Rover Detected Here? Explain!!" has attracted thousands of views. UFO chaser Scott C Waring, of ufosightingsdaily.com, agrees it is proof of alien life. He blogged: "Here you see the Curiosity rover drilling into the dirt on Mars and as it is, a small critter is seen walking away from the drill area. "To top it off, the small creature walks just a little way, before something even bigger stretches out from below a rock and snags it.

My view;
It is very extraordinary video footage to say the least. You see the creature using the shadows of the Curiosity Rover to dodge and hide within (maybe it has to do with their sight) the shadows so that's something for experts to look in to, because we not only see a crab like bug, we see it's behaviours also? The first bug is using the Rover to bring it out and then stalk it and eat it. This is a one off event that NASA won't let happen again? But now with other countries involved in the space race like China and India, who knows what the future might hold?

Russia recently warned the US that if it doesn't tell the public then Putin will? It is worth remembering that the amount of credible videos coming out of Russia showing downed UFOs and crashed mangled Alien bodies of Aliens is getting more and more. To say Russia never had it's own Alien technology, back engineering program is laughable. But not as nearly as successful as the United States? Let's not forget that the USA tried to bankrupt the USSR in to fighting a fictitious war to win the moon, so the US had a start over the Russians.

That was a time in history when Russia really let their guard down and was taken advantage of. The US really did play a number on them with that. The amount of UFOs over Russia is dwarfed by the sightings over the USA and tells me that the US is indeed in the lead with reverse engineered technology and are having better luck with it. The Russians got in to it late in the game when they literally downed their own UFO and well that's history. Hopefully Putin will explain all to the world?