FLIR1 is the second of three US military videos of unidentified aerial phenomenon (UAP) that has been through the official declassification review process of the United States government and approved for public release. It is the only official footage captured by a US navy F/A-18 Super Hornet present at the 2004 Nimitz incident off the coast of San Diego. 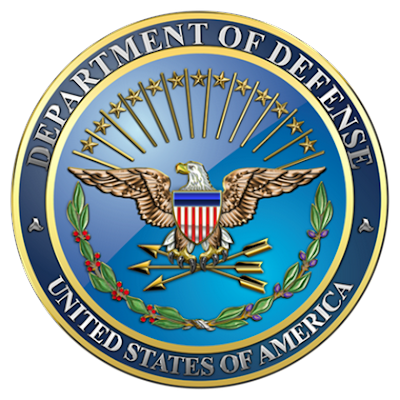 “There’s a whole fleet of them,” one pilot says.

Are we alone in the universe? Government officials confirmed for the first time this month that the U.S. Defense Department has been trying to answer that question, according to the New York Times. Out of the defense department’s $600 billion budget, a very well-hidden $22 million went to the Advanced Aviation Thread Identification Program, an initiative that investigates reports of “anomalous aerial vehicles,” more colloquially known as UFOs.


The former director of the program, a military intelligence official named Luis Elizondo, resigned in October and shared previously classified videos of fighter jet pilots sighting UFOs. “There’s a whole fleet of them,” one pilot says.


FLIR1 is the second of three US military videos of unidentified aerial phenomenon (UAP) that has been through the official declassification review process of the United States government and approved for public release. It is the only official footage captured by a US navy F/A-18 Super Hornet present at the 2004 Nimitz incident off the coast of San Diego.


Like Gimbal, this footage comes with crucial chain-of-custody (CoC) documentation because it is a product of US military sensors, which confirms it is original, unaltered, and not computer generated or artificially fabricated. While there have been leaked versions on the internet, the CoC establishes the authenticity and credibility that this version is the original footage taken from one of the most advanced sensor tracking devices in use.

Gimbal is the first of three US military videos of unidentified aerial phenomenon (UAP) that has been through the official declassification review process of the United States government and has been approved for public release. This footage, and all official USG footage you will see on TTS Academy’s community of interest (COI), comes with essential chain-of-custody documentation validating that it is received in its original and unaltered form and is authentic. The US Department of Defense uses this process in order to meticulously ensure that information and material retain their integrity without revealing sources and methods. This documentation is what sets this footage apart from anything else that has made its way to the public domain, by establishing its authenticity and thereby giving it enormous historical significance.


The video, taken from the cockpit camera, shows a glowing object traveling at high speeds while rotating and includes audio of Navy pilots struggling to process what they are seeing. The program was created in 2007 and officially ended in 2012, but officials familiar with the initiative told the Washington Post that collection efforts were ongoing as recently as last month. Former Senate majority leader Harry Reid (D-NV) was largely responsible for securing funding for the program. He worked with the late Sen. Ted Stevens (R-AK) and the late Senator Daniel K. Inuye (D-HI) on the project and recalled that Stevens, who served as a pilot in the Army’s air force during World War II, was eager to investigate claims that service members were often hesitant to report sightings to their superiors due to fear of being laughed at or stigmatized.

“Ted Stevens said, ‘I’ve been waiting to do this since I was in the Air Force,” Reid said, adding that during the meeting Stevens recounted being tailed for miles by a strange aircraft with no known origin. Most of the money went to Bigelow Aerospace, a company run by billionaire entrepreneur and friend of Sen. Reid, Robert Bigelow. Bigelow is currently working with NASA to develop and produce expandable crafts for human space travel. He said in a CBS “60 Minutes” interview that he “absolutely convinced” that alien life is real and that extraterrestrials have visited Earth.

The defense department program made discoveries in 2009 that prompted Sen. Reid to request a special designation and heightened security for it. “Much progress has been made with the identification of several highly sensitive, unconventional aerospace-related findings,” Sen. Reid said in a letter to William Lynn III, a deputy defense secretary at the time. His request was denied, the Times reported. 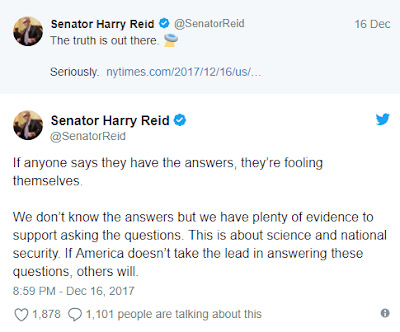 Elizondo said that internal skepticism made it difficult for the investigations to take place within the Pentagon. “I was honored to serve at the DoD and took my mission of exploring unexplained aerial phenomena quite seriously,” he said. “In the end, however, I couldn’t carry out that mission, because the department — which was understandably overstretched — couldn’t give it the resources that the mounting evidence deserved.” In an interview on the Times “The Daily” podcast, he said that these videos are just a small sampling of the evidence the Defense Department has collected while documenting alleged UFO activity.

Source of our information: