NASA Reinvents The Wheel, And Another Bad Ass Vehicle...

NASA has reinvented the wheel quite literally? But, that's just NASA for you, always pushing the envelope and always bringing their A game! Reinventing the wheel hasn't been done in what, 5500 years! Or 3500 BC. Yes Wikipedia helped me out guys, this a revolutionary step forward for all aspiring scientists, inventors and problem solvers alike the world over? It say's this, always think outside the box and never give up! Even the norm's of today can be radically changed depending on how you look at things and how you approach life and things?

How long do your tires last? I mean literary, how often do you buy a new set? Once a year? Once in two years? This part of our vehicles is a real headache for drivers, as you never know when there will be another collapse. Especially for those, who enjoy off-road trips.

NASA has reinvented the wheel quite literally? But, that's just NASA for you, always pushing the envelope and always bringing their A game! Reinventing the wheel hasn't been done in what, 5500 years! Or 3500 BC. Yes Wikipedia helped me out guys, this a revolutionary step forward for all aspiring scientists, inventors and problem solvers alike the world over? It say's this, always think outside the box and never give up! Even the norm's of today can be radically changed depending on how you look at things and how you approach life and things? 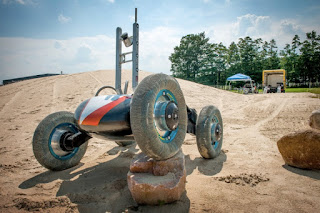 But recently NASA has created something insane! Taking for the base the original concept that helped the moon buggy zip around on the surface of the Moon, metal wheels with steel springs, a team of engineers have finally presented a new type of metal spring tire made of a nickel-titanium alloy instead of steel.

If you were dreaming of indestructible tires here they are. The thing is, they are not planned for regular cars, at least yet. Such tires are worked out for more thorough space exploration. And if you are in the depth of despair now I can totally understand you. But NASA believes they are more important for their Mars investigation than for your annual mountain ride or weekly shopping trips. 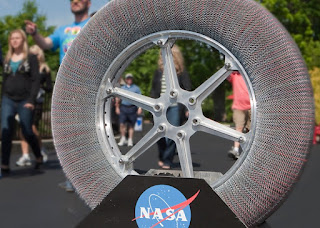 Anyway, they do exist. And if they are used for space machines in 2017, in about 2030 there will be at least an attempt of adjusting such tires to regular cars we all drive. 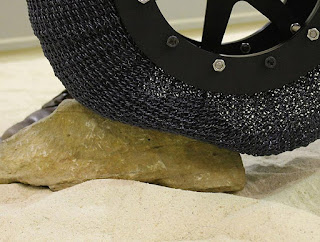 The secret of this innovation is in its shape memory. It means that any deformation won’t cause a damage to it. On the contrary – the tire takes shape of this deformation for some time and then gets back to its original look. Literary, it can withstand excessive deformation without permanent damage. 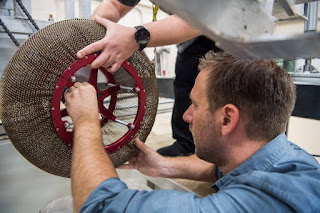 Such technology has a number of benefits that are the way out for most of the space troubles as changing the whole wheel here is a quest with almost no solution. When I say ‘benefits’, I mean they are:

Robust: Can be configured for high traction on various terrains

Simple: Eliminates the need for air

Versatile: Tire stiffness can be designed to limit energy transferred to vehicle

Lightweight: No inner frame needed for the tire/wheel assembly 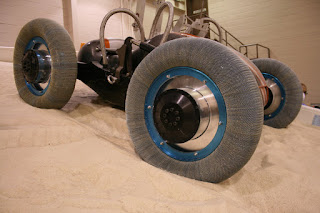 If we talk about an on-Earth solution, there were attempts of applying such tires for bicycles, which turned out to be quite successful. And there are reasons to expect something like this for cars. It can actually make tires exploitation much cheaper and our drives will become much softer. Commonly used elastic-plastic materials (e.g. spring steels, composites, etc.) can only be subjected to strains on the order of ~ 0.3-0.5% before yielding. With this new technology, we get up to 10%. Sounds great, isn’t it?

NASA has actually dabbled with a few prototypes and you know what, they've created some very nice looking (composites) wheels in the recent past? Check out these images below and you'll see what I am talking about? Then also take a look at the amazing actual vehicle with the bad to the bone wheels in the very end image... 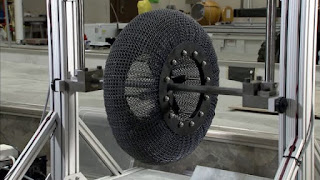 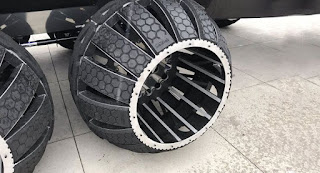 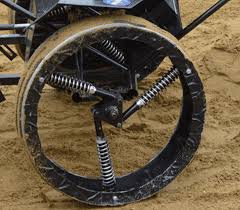 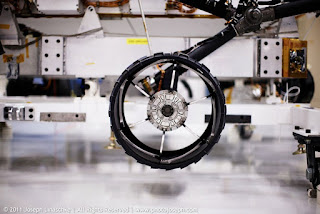 AND YES this has been put forward as a candidate for moving people around the Planet Mars? So, I guess this is one day going to replace the Mars Rover? If it is it's replacement then oh wow! This is like going from a Ford KA then to a Bat Mobile? This is just bad ass and probably so futuristic inside that it looks like back engineered tech from Star Trek itself? You gotta admit that this vehicle is stunning and heavily influenced by Batman? Specs are below: 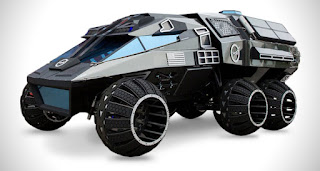 This concept rolled out at the Kennedy Space Center this summer and is engineered to conquer the Mars alien terrain. Weighing in at 6,000 pounds and boasting room for four fully equipped astronauts, it makes the lunar rovers we drove around the surface of the moon back in the 1970's look like go-carts by comparison (said one Astronaut). Even the wheels on this thing are impressive. Measuring in at an impressive 50 inches in height, they’re specially designed to grip Martian sand. NASA isn’t sharing much when it comes to technical specs, but from what we’ve learned the concept has a 700 volt battery, and can hit speeds of 70 mph while on Earth. On Mars? Only about 10-15 mph. Probably for the better all things said. And i'm gonna leave this impressive beast there...