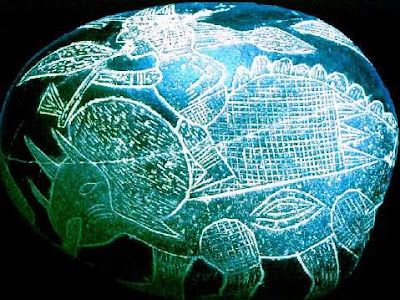 In the vicinity of the village of Ocucaje and Ica (seriously not Inca) in Peru, a collection of rounded stones has been amassed by Dr. Javier Cabrera.

The people are shown hunting or struggling with a variety of monsters that resemble BRONTOSAURS, TRICERATOPS, STEGOSAURS, AND PTERODACTYLS but how did they know what they looked like?

Human beings are portrayed as having domesticated animals that appear to be DINOSAURS and are using them for transportation and warfare. In 2020 and with all that's going on i.e UFOs are now a fact (since last year 2019).

Land of the lost trailer by Movie Clips on YouTube:
We have a global pandemic, nobody seems to know what the new normal is? Thing's are happening at an unprecedented pace in terms of "never before happened" so it's just a case of what's next, what's going to happen... 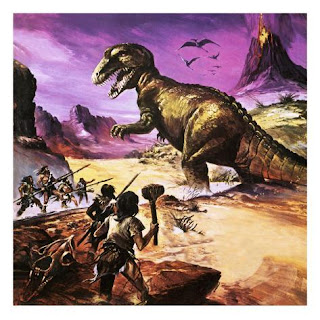 The Ica stones are a collection of stones allegedly discovered in a cave near Ica, Peru. The time lines of humans is under scrutiny like never before, and rightly so.
The andesite stones have had their oxidized surfaces engraved with depictions that call into question just about everything science has taught us about the origin of our planet, ourselves, and other species.
For example, some of the stones depict men (who look like ancient Incas or Aztecs) attacking huge stylized monsters with axes.
The monsters are said to be dinosaurs.
(One film production company goes so far as to claim that the monsters on the stones are "realistic depictions of Stegosaurus, Tyrannosaurus Rex and Pterodactyls.")


THERE'S NO WAY HE COULD OF HAD ALL THE ICA STONES ESPECIALLY MADE BY THE SHEAR VOLUME OF THEM ALONE WOULD OF TAKEN AN ARMY TO CARVE TAKING YEARS! 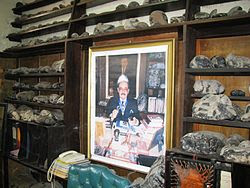 The cave where the stones were allegedly discovered has never been identified, much less examined by scientists.
Skeptics consider the stones to be a pathetic hoax, created for a gullible tourist trade. Nevertheless, three groups in particular have endeavored to support the authenticity of the stones:

(a) those who believe that extraterrestrials are an intimate part of Earth's "real" history;

(b) fundamentalist creationists who drool at the thought of any possible error made by anthropologists, archaeologists, evolutionary biologists, etc.;


(c) the mytho-historians who claim that ancient myths are accurate historical records to be understood literally.

The Ica stone craze began in 1996 with Dr. Javier Cabrera Darquea, a Peruvian physician who allegedly abandoned a career in medicine in Lima to open up the Museo de Piedras Grabadas (Engraved Stones Museum) in Ica.
There he displays his collection of several thousand stones. Dr. Cabrera claims that a farmer found the stones in a cave.

As an example...
The Waldemar Julsrud Collection Dinosaurs and humans coexisting. 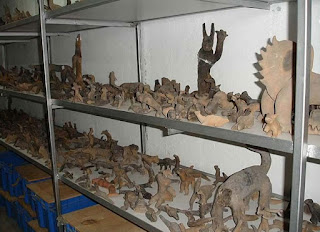 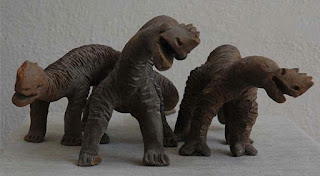 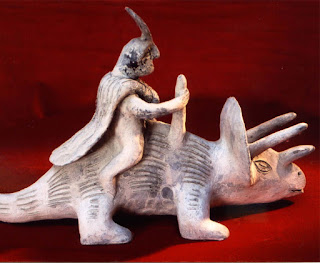 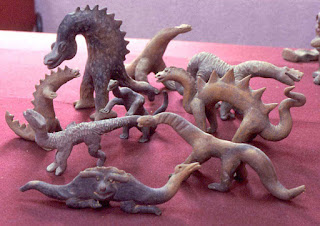 The above statues are from another story I was involved in researching not long ago on this site (UFO Sightings Footage) and I feel it's right to show you that it was not just this culture of people who were also depicting themselves with Dinosaurs proving "yet again" that the mainstream history timelines must be rewritten! They are from a collection of many, many as you can see from the images called "The Waldemar Julsrud Collection".

The farmer was arrested for selling the stones to tourists. He told the police that he didn't really find them in a cave, but that he made them himself. Other modern Ica artists, however, continue to carve stones and sell forgeries of the farmer's forgeries. In 1975, Basilio Uchuya and Irma Gutierrez de Aparcana claimed that they sold Cabrera stones they'd graved themselves and that they'd chosen their subject matter by copying from "comic books, school books, and magazines" (Polidoro 2002). Dr. Cabrera's museum is listed as a tourist site by the Peruvian National Chamber of Tourism, though the authenticity of the stones is left open. 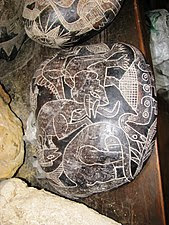 The Ica stones are a collection of andesite stones found in Ica Province, Peru that bear a variety of diagrams. Some of them supposedly have depictions of dinosaurs, and what is alleged to be advanced technology.


According to the Chamber of Tourism, the museum has an exhibition of engraved stones depicting -supposedly - thousand of years of human activities. Based upon the found pieces, collection owner doctor Javier Cabrera, holds a theory according to which Ica was the seat of the first Peruvian culture.
Link to Wikipedia Ica stones:
Dr. Cabrera's authority in the matter of the stones seems to have originated from his declaration that a particular stone (shown above) depicts an extinct fish.

The depiction is stylized, as are most of the drawings of ancient Peruvian cultures. It must be admitted that knowledge of extinct fish is rare among physicians, even those who have studied biology. Those who are impressed with this knowledge of extinct fish don't seem to be interested in exactly what fish this is supposed to be, when it became extinct, or what the telltale marks are that allow for this identification.


It is argued by the Extraterrestrialites and the Creationists that this depiction of an extinct fish proves either that the Indians who made these stones were given information by aliens about extinct fish (for they could not possibly have found any fossils and copied the fossils) or that the timeline that places extinctions of animals like this fish millions of years in the past are clearly wrong. The Indians lived within the past millennium or two, and so the extinctions must be recent. It is argued by the Myth-Is-Historyites that since the stones depict men attacking monsters, monsters must really have existed and men must really have attacked them.

Thus, either humans existed during the Jurassic period or dinosaurs existed until very recently. It is argued by all of the above that this means that evolutionists are wrong. Furthermore, the fact that they won't admit that they are wrong proves that there is a conspiracy among scientists to keep the truth from the public in order to dupe us into believing things that are inconsistent with both the notion that a god created all species a few thousand years ago and that we are all descendents of aliens. (Note: these are the same scientists who have kept the truth from us about the reality of the monsters depicted in stories, on vases, and on temples in ancient Greece, India, etc. They have also kept from us the truth about the ancient Egyptians building pyramids as radio towers.

There are many other things these wicked scientists have hidden from us, such as that in 75,000,000 B.C. Xenu ordered a nuclear attack on our planet.) Cabrera has his own theory about the creators of the stones. His theory is based upon the premise that the stones are not a hoax. This is understandable, since, if the stones are a hoax, Cabrera is one of the key hoaxers. Cabrera's theory is that the stones depict the first Peruvian culture as an extremely advanced technological civilization. How advanced? The stones allegedly depict open-heart surgery, brain transplants, telescopes, flying machines, etc.

When did they exist?

They came from the Pleiades about one million years ago.
How does he know this?
That is anybody's guess, but you can read about it in Cabrera's book The Message of the Engraved Stones of Ica.
Why don't scientists simply date the stones and settle the matter?
Stones without organic material trapped in them can only be dated by dating the organic material in the strata in which they are found.
Since Cabrera's stones come from some mystery cave which has never been identified, much less excavated, there is no way to date them.
That no one has ever found any other remnant of this great culture should be troublesome, however. Such a great society might have left at least some garbage or some ruins, maybe even a bone or two, a grave here or there, or a temple, a hospital, an observatory, an airport. 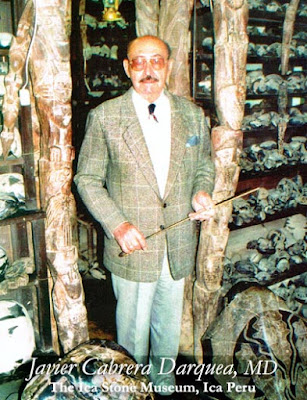 But this great civilization, unlike every other great civilization of the past (except Atlantis, of course!) has vanished without a trace, except for Cabrera's stones. Of course, there are the Nazca lines. Unfortunately, the creators of the Nazca figures didn't depict any Indians attacking dinosaurs or doing brain transplants, something which might have tied the Ica stones to the Nazca lines in this exciting new field of "alternative science". There is, of course, an explanation for the cleanliness of this great people. They were able to exist long enough to hunt dinosaurs and build spacecraft (when they were not doing brain transplants) and yet leave nothing behind but a cave full of artistic scratches on stones because they were not from this planet.

They left (and presumably took everything with them), leaving behind only the stones as a kind of puzzle for later generations of stupid humans to solve. Maybe they went on to Nazca or to Lubaantun to create more puzzles. Maybe these aliens are giving us an I.Q. test. Or the stones may be another test of faith given to mankind by Abraham's god. Or maybe they're just a hoax. The proof that the stones are not a hoax, says Dr. Cabrera, is in their number. There are too many stones for a single farmer, or even a collective of hoaxers, to have scratched out. He claims that the locals have unearthed about 50,000 stones and that they showed him a "tunnel" where there are another 100,000. However, so far no scientific expedition has set out to explore this tunnel. Furthermore, says Cabrera, who apparently fancies himself an expert on volcanic stone as well as on extinct fish, andesite is too hard to carve well by mere mortals using stone tools.

True, but the stones aren't carved.


Basilio explained how he and Irma achieved the "ancient" look on their stones:

They laid out the graved stones in a chicken pen and the "chickens did the rest" (Polidoro 2002).

Are the stones authentic?

If by authentic one means that they were engraved by pre-Columbians, then the answer has to be an unqualified "not all of them." Some engraved stones are said to have been brought back to Spain in the 16th century. It is possible that some of the stones are truly examples of pre-Columbian art. However, it is known that some such stones are forgeries. Tourists, not just in Peru, but everywhere on earth where there are antiquities, have been suckers for forgeries. Local con artisans are aware of the market for "forbidden" antiquities. Pre-Columbians certainly were fascinated with monsters, as were ancient European cultures, but do the stones depict dinosaurs? That is open to interpretation.

If they do depict dinosaurs and humans together what is more likely? that they are accurate historical documents or that they are part of a clever hoax? In light of the lack of corroborating evidence, a reasonable person must conclude that the stones are a hoax. Cabrera's story does not have the ring of verisimilitude about it, though it does have a certain charm. The story certainly has found several ready audiences who have found a niche in their own belief systems for the stones. Never mind that the belief systems not only contradict one another, but are also contrary to the preponderance of the scientific evidence. Creationists, mythohistorians, and extraterrestrialist's are in a jihad against belief in evolution where apparently it is one's duty to make the preposterous seem plausible.

DEDICATED TO EVERYONE WHO WANTS THE TRUTH?

Considered a courageous, dignified, and thoughtful man by those who knew him, Dr. Cabrera never wavered in his belief that one day the world would come to understand, perhaps even accept, the ancient message of the stones. He is survived by his seven children.