The NASA live feed bloody went down yet again and they did it because why? I know, it's getting really boring now. I don't know if UFOs or Aliens are even worth reporting on anymore? There seems to be mountains of evidence but nobody looks at it from NASA or the government so getting things verified and answered is pissing in the wind. Is it worthwhile anymore? Let me know.
NASA cuts the live feed once more, this time it was not in time! Seen as though they've got a 30 second delay button this makes me think there's a whistleblower in the Lions den? NASA has always effing denied it, the government has always denied everything not just UFOs so who we gonna get our reliable information from? It is your eyes! Rely on your eye, God gave you eyes to see didn't he? Well use em.

Who could be the mole? Is it Erik in accounting? Is it Jo in overseas investors sec? Is it Harry "dirty Harry" to his enemies.

Or is it dippy Suzy in admin? Your all wrong, it's me and i'm anonymous. Not that "Anonymous" just unknown will do. Well that's what was written on the dongle.

Here's the few more images I have.

In a video uploaded to YouTube, a “cigar-shaped” object is seen above Earth, with two bright objects below it. And the two smaller orbs appear to move towards the larger shape. The, before the footage ends, the UFOs appear to suddenly disappear. prolific UFO hunter Streetcap1 uploaded the video to YouTube.


“What we're seeing here looks like none of those. “And it would appear that shortly after these objects come into view, NASA either purposely or the UFOs do it on their own, but the objects quickly dim out.

“So we may have had NASA dimming the feed, messing with the contrast or the exposure to make these objects disappear from view." Many viewers were not convinced by the theory. One posted on YouTube: "probably an old satellite that’s space debris.” Another added: “It’s obviously an airplane distorted the same way you see an image through a clear glass that is round.”

There have been several similar claims of NASA shutting the feed when an alleged UFO came into view - but it turned out they were nothing more than light reflected of the ISS itself showing on the camera. Scott Brando, who runs hoax-busting website ufoofinterest.org said the latest video was just another lens flare anomaly.

He also provided an example of a similar lens flare in another ISS video feed, uploaded by Streetcap1. NASA denies it has ever seen any UFOs by the ISS, and says the camera only cuts out due to a technical glitch, or changing between different cameras. 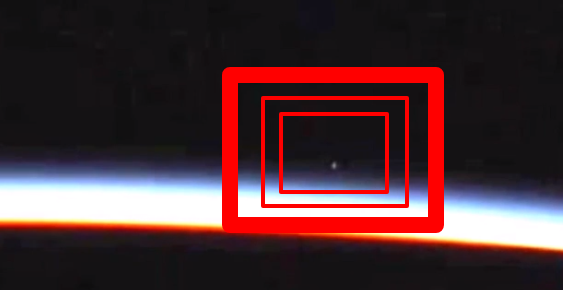 Six unidentified flying objects have been spotted by UFO researchers on NASA’s live feed of the view from space from the International Space Station. Of course, this is not the first time that UFOs have appeared on this live stream but in this case, the details are even stranger than usual. This video captures the incident in question which was captured by the American space agency. In the footage, six UFOs can clearly be seen moving in formation across the field of vision of the camera.

You can always count on NASA to give you a UFO story. 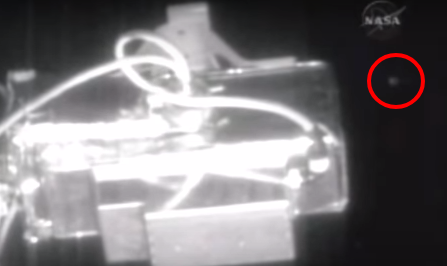