UFO On Side Of Mountain With Tinted Windows On Mars

There's a definite Alien structure on Mars and in this post I well and truly prove it. It's official NASA Photo archive material located on Gigapan.

This is Alien life on Mars and to be really, really Frank and honest with you guys, as far as know this is it.

This is what I have been searching for since I began researching UFOs. I have just created a video straight from my phone, recording the screen and I zoomed in on the artificial structure in the Gigapan photo which is NASA's high resolution photos. Seriously large Mars photos. These pictures are some of the largest ones ever taken up close of any planet.
Im absolutely stunned by the artificial looking metallic structure of the size, the fact it's got definite windows or observation decks. This is the one guys.
I've had to create another quick video now (16th December 2020) because I have got so much faith in this being something that could change everything that we know - and I believe that. When you go to the link Gigapan and you look it up yourself, play around with the zoom, look at it the way you want to and you'll see exactly what I mean.

I see a viewing platform like a gallery in skyscrapers where you can go and look out of over the city and take selfies etc.

There's one skyscraper with a glass floor, yeah that one. This is the thing that's gonna change your beliefs about life on Mars. But if your sceptic then it's probably no point in reading this because as far as I'm concerned, it is what it is.
It doesn't need no opinions and it doesn't need anyone saying that it's not there, because as you and me can clearly see, that is there and it shouldn't on Mars because it's intelligently made and it's not ours (apparently).


The one thing i'm truly convinced of now is that this is definitely a real anomaly. It's a piece of evidence for the existence of Aliens in the universe. What else could this be truthfully? This is probably the best evidence I've ever come across, what about you?

It's got windows, frames, tinted glass.

It's got metallic structuring to it.

It's a product of intelligent engineering.

It's gone through a process of manufacturing of which we can all agree on?


there's obviously going to be someone somewhere that is going to be going with the government stance and that Aliens don't exist therefore this cannot be real?
This person will probably have the opinion that they're right?
I mean I think I'm right about this, but then again so does the  massive majority that will see this and they to will think that the person who say's that this is a natural formation is being coerced in to saying that?
OK look at this, you tell me if that's not made by "someone"? 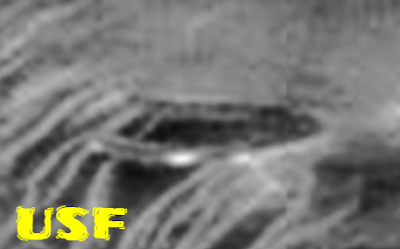 "IF" that's a natural formation of rocks and sand then I'm a son of a gun as the Americans would put it?
Believe me, that's no naturally forming landmark!
It's either "like I say" a viewing platform or a UFO that's perfectly overhanging the mountain?


I know for a fact that tinted glass does not grow or for naturally in the wilds of Mars! It definitely doesn't grow on trees.
It's gleaming in the Sun. It's rounded and omg, it almost sounds pathetic that I have to point the obvious out but it's what I do and I'm doing it. 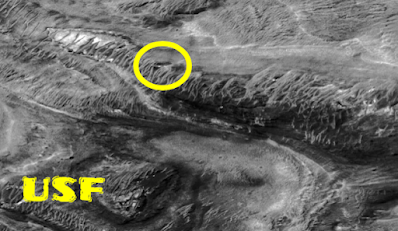 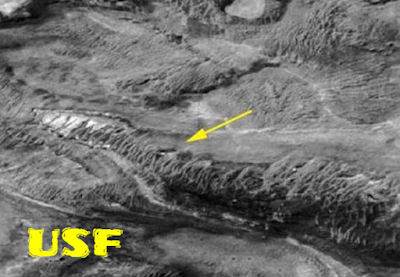 There really isn't anything more to say other a big thank you to Scott C Waring from UFO Sightings Daily.