Elon Musk just shared a video of the Eutelsat 10B successful deployment and there's a fantastic double UFO sighting. They both appeared at deployment.

I was literally just writing a post about a UFO or rather 9 UFOs filmed at night splitting up and I got a notification from Twitter.

So, I followed it and it was about some Twitter merch and a couple of tweets underneath it was a video that Elon had shared from SpaceX, a video of Eutelsat 10B successful deployment. 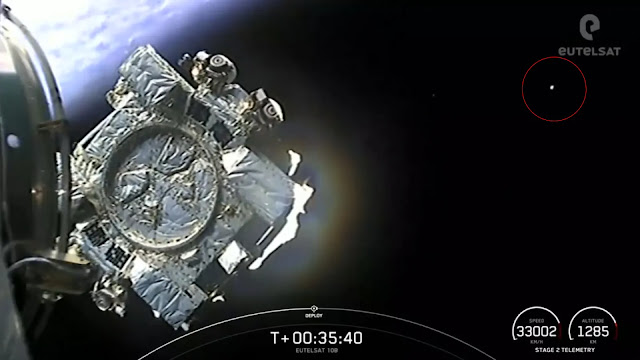 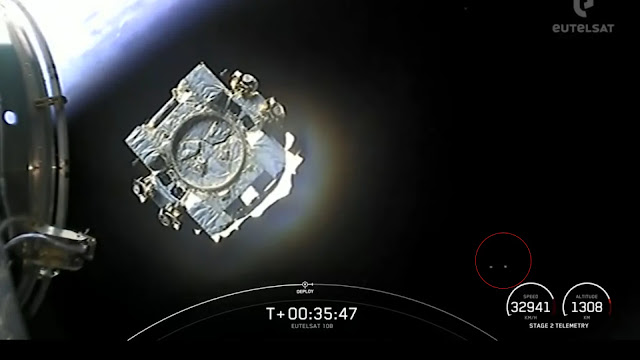 Above, lower right corner 2 UFOs. Above top photo the UFO is top right corner.
We can see that these two UFOs (or UAPs) can't be frozen thruster fuel ice particles because they both arrive from totally different directions or parts of space which are actually coming to it, not been ejected away from it. It being the Eutelsat 10B satellite.

Seriously, the first UFO comes into the screen from the top right at a downward angle flying towards the bottom left, it's a white typical UFO or UAP that's flying into the screen. Then at precisely T35:47 that UAP meets up with another UAP which mis moving upwards from the bottom of the screen!

You can't make it up?

Does Elon know about this?

He probably shared it knowing that these two UAPs was there!

The whole world can see these two blatant UFOs.

So, yes I reckon he's aware of it. I also believe that before when he mentioned to paparazzi that SpaceX has way better CGI than NASA he was probably pointing out that NASA uses CGI in a specific instance being this...

Can you remember the Earth image that NASA shared from around 1978? It was decades ago (Earth from space). Well did you notice anything suspicious about that image of Earth and one from 2017?

No, it's only once you put both of them together side by side that you start to see very familiar thing's between the obvious two obvious fake Earths as there's the exact same cloud pattern's in both. The exact same cloud formations and in the same exact places in the so-called decade's apart Earth photo's?

It beggars belief that the same cloud pattern's are in the 1978 photo of Earth as the 2017 photo of Earth. It's a clear copy and paste fake photo. Is this what Elon Musk was referring to when he suggested that SpaceX have way better CGI than NASA? Because if it is so, then we can't trust anything to come from SpaceX.

He does like to keep people guessing though like when he said "I could have an implant in my head now" referring to the brain chip Neuralink:

Musk founded Neuralink in 2016 with the goal of developing a device that, after being implanted in a human brain, would allow a computer to translate a person's thoughts into action. He wants not only to treat brain diseases and disorders but cure them.

If we put both photos of the Earth together the 1978 and 2017 Earth photo's we can see that they're one and the same: 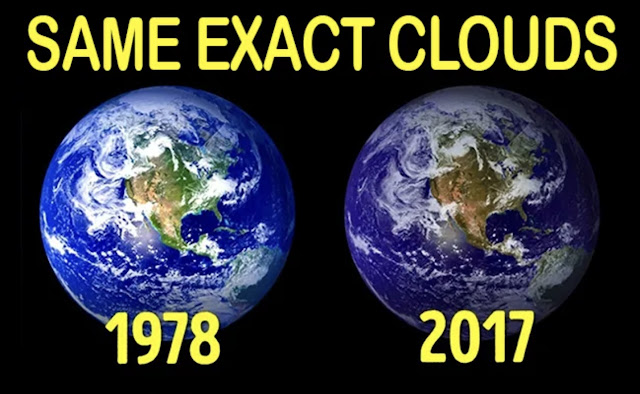 If it sounds to good to be true, it probably is! Everyone has heard of this old saying.

So, is Elon Musk deliberately sharing UFO footage and while it's technically sharing the video to promote the successful deployment of the Eutelsat 10B he's also shared "2 UFOs" or UAPs if you wanna get non technical?

Double UFO sighting, double reason for sharing. Was it to show the UFOs or to show off the Eutelsat 10B successful deployment?

With the current status of the UFO genre, it's probably just to share the SpaceX Eutelsat 10B successful deployment and the UFOs was just a random... Actually what are they then? Because like I deliberately mentioned earlier leading up to now, the first UFO came in from the opposite side to the SpaceX rocket on an opposite trajectory making it impossible for it to be an ice crystal from the seperation of the satellite from the main body of the SpaceX rocket.

It literally came in from the opposite direction meaning it's a UFO. It then meets up with another UFO in the lower part of the screen at T35:47 and that's another excellent reason why I believe that Earth's under surveillance.

If NASA finds a planet with life on it, will they ignore it or survey it?

These UFOs are only doing EXACTLY what we're going to do when e find one. See, it's not that crazy once it's literally spelled out why UFOs could be surveying the Earth. Without the explanation though I understand that it does sound "interesting" but, it's literally the same as what NASA is doing to comet's, Moon's, Earth itself with satellites and what it will do once it's discovered an exoplanet in the habitable zone and that has life.

It will put it under surveillance!

So, why can't we already be under a similar system by a life from hundreds of years ahead of our own?

I say hundreds because of the UAPs, they're futuristic exotic technology.

Here's the SpaceX video with 2 UFOs:

Deployment of Eutelsat 10B confirmed pic.twitter.com/2TwjY8ObzS