J. Allen Hynek Was Probably A great Ufologist And Did A Complete Turnaround With His Alien Beliefs!

Josef Allen Hynek (May 1, 1910 – April 27, 1986) was an American astronomer, professor, and ufologist. He is perhaps best remembered for his UFO research. Hynek acted as scientific advisor to UFO studies undertaken by the U.S. Air Force under three consecutive projects: Project Sign (1947–1949), Project Grudge (1949–1952), and Project Blue Book (1952–1969). In later years he conducted his own independent UFO research, developing the "Close Encounter" classification system. He is widely considered (by whom?) the father of the concept of scientific analysis both of reports and especially of trace evidence purportedly left by UFOs.
As far as we can see, this is one heck of a guy? He did a full 180 turnaround and was convinced in later life that UFO were in fact real? He went in to it actively debunking UFO stories with the US Navies approval and their search for a stooge was then practically over? But then he started to have doubts and the rest as they say is history? He is one heck of an intelligent guy!

In later years he conducted his own independent UFO research, developing the "Close Encounter" classification system. He is widely considered (by whom?) the father of the concept of scientific analysis both of reports and especially of trace evidence purportedly left by UFOs. 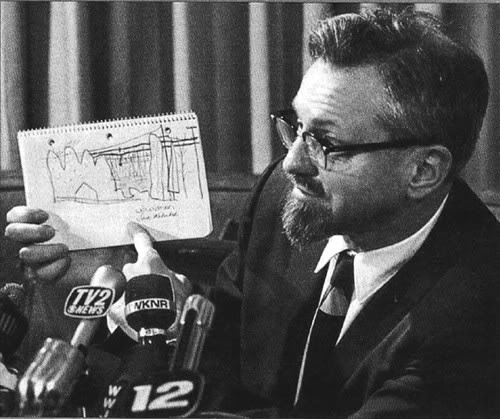 Hynek was born in Chicago to Czech parents. In 1931, Hynek received a B.S. from the University of Chicago. In 1935, he completed his Ph.D. in astrophysics at Yerkes Observatory. He joined the Department of Physics and Astronomy at Ohio State University in 1936. He specialized in the study of stellar evolution and in the identification of spectroscopic binary stars.

In response to numerous reports of "flying saucers", the United States Air Force established Project Sign in 1948 to examine sightings of unidentified flying objects. Hynek was contacted to act as a scientific consultant to Project Sign. He studied UFO reports and decided whether the phenomena described therein suggested known astronomical objects.

When Project Sign hired Hynek, he was skeptical of UFO reports. Hynek suspected that they were made by unreliable witnesses, or by persons who had misidentified man-made or natural objects. In 1948, Hynek said that


and described it as a fad that would soon pass. For the first few years of his UFO studies, Hynek could safely be described as a debunker.

He thought that a great many UFOs could be explained as prosaic phenomena misidentified by an observer. In his 1977 book, Hynek admitted that he enjoyed his role as a debunker for the Air Force. He also noted that debunking was what the Air Force expected of him.

Hynek began occasionally disagreeing publicly with the conclusions of Blue Book. By the early 1960s—after about a decade and a half of study—Clark writes that "Hynek's apparent turnaround on the UFO question was an open secret." Only after Blue Book was formally dissolved did Hynek speak more openly about his "turnaround". By his own admission, the soft-spoken Hynek was cautious and conservative by nature.

He speculated that his personality was a factor in the Air Force keeping him on as a consultant for over two decades. Some other ufologists thought that Hynek was being disingenuous or even duplicitous in his turnaround. Physicist James E. McDonald, for example, wrote to Hynek in 1970, castigating him for what McDonald saw as his lapses, and suggesting that, when evaluated by later generations, retired Marine Corps Major Donald E. Keyhoe would be regarded as a more objective, honest, and scientific ufologist.

It was during the late stages of Blue Book in the 1960s that Hynek began speaking openly about his disagreements and disappointments with the Air Force. Among the cases about which he openly dissented with the Air Force were the highly publicized Portage County UFO chase, in which several police officers chased a UFO for half an hour, and the encounter of Lonnie Zamora, a police officer who reported an encounter with a metallic, egg-shaped aircraft near Socorro, New Mexico.

In late March 1966 in Michigan, two days of mass UFO sightings were reported, and received significant publicity. After studying the reports, Hynek offered a provisional hypothesis for some of the sightings: a few of about 100 witnesses had mistaken swamp gas for something more spectacular. At the press conference where he made his announcement, Hynek repeatedly and strenuously stated that swamp gas was a plausible explanation for only a portion of the Michigan UFO reports, and certainly not for UFO reports in general

But much to his chagrin, Hynek's qualifications of his hypothesis were largely overlooked, and the term swamp gas was repeated ad infinitum in relation to UFO reports. The explanation was subject to national derision. In his reply dated October 7, 1968, to a request for scientific recommendations regarding Blue Book from Colonel Raymond Sleeper, commander of the USAF Foreign Technology Division, Hynek noted that Blue Book suffered from numerous procedural problems and a lack of resources, which rendered its efforts "totally inadequate". Hynek also noted that one wag had bestowed upon Blue Book the epithet of

"Society for the Explanation of the Uninvestigated".

“Ufology today is in the state I would say chemistry was when chemistry was alchemy, a mixture of superstition, wild ideas, unproved claims, and yet out of that whole mess, finally the very first class science of chemistry evolved. And I think the same thing is going to happen eventually with Ufology?
Allen Hynek quote!