The Shining is Stephen King’s most well-known novel, and there’s a reason for that. It is probably his most well known because it was promoted heavily and as it was getting more and more units sold, the book itself was getting rave reviews from all corners of the globe! Hence, the book practically sold itself and brought many fortunes to a lot of people involved with it.
Book Review: The Shining by Stephen King. 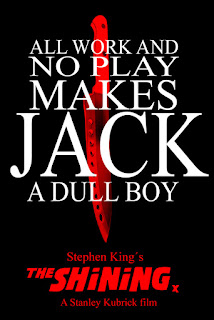 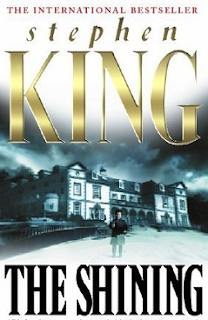 I loved the book the film by Stanley Kubrick!
But not everyone agrees with that?

The Shining is Stephen King’s most well-known novel, and there’s a reason for that. It is probably his most well known because it was promoted heavily and as it was getting more and more units sold, the book itself was getting rave reviews from all corners of the globe! Hence, the book practically sold itself and brought many fortunes to a lot of people involved with it? It was going to be a phenomenon and the publishing house could probably see that from way, way's off?

The story is haunting from start to end, a mix of psychological thriller and supernatural horror that blends nicely into a terrifying story. Jack Torrance is a man who’s life started out promising but ended in a spiral of bad luck and bad choices. He’s a recovering alcoholic, an author who hasn’t penned a decent story in God knows how long, a teacher who was fired for harming a student.

Nothing in his life is going the way he’s planned. Even his son, little Danny, is a failure, hearing voices that aren’t there and predicting the future with a startling accuracy. But Jack makes due with what he has, and when money worries rise, he takes on a job as caretaker for the Overlook Hotel. The Overlook is a gigantic, classy hotel situated in the mountains.

Every winter, the hotel closes since the weather gets so bad no one can make it to the hotel either way. It’s during these closing months that Jack and his family will take care of the Overlook, make sure the boiler doesn’t heat up and explode, fix some smaller things on the roof and building, and in general get paid to do very little to nothing.

But of course things don’t work out that way. From the moment Danny sets foot in the Overlook, he knows something is wrong. In the presidential suite, blood stains appear on one of the doors. There’s a room that gives him the chills when he passes it by, and he’s almost certain something bad happened there.

Mr. Halloran, who works at the Overlook during summer, warns Danny about the evil spirits lingering in the hotel, and tells him that if something bad happens he has to shout really hard in his head. Then Mr. Halloran will come first chance he gets. Danny tells himself nothing bad will happen, not even when a bee hive his Dad brought down, supposedly dead, comes back to life in the middle of the night.

Not even when he stands face to face with a bloated, rotten corpse in the “forbidden” room. Not even when his Dad starts acting weird, or when he’s chased by something not entirely human on the playground. But before long, Danny is forced to face the truth: the Overlook isn’t planning to let them escape. It likes its new hostages, especially Danny, and wants to keep them there for all eternity…

The Shining is a ghost story told the way it should be. The characters are strong and enduring, all in their own right. I actually really like Jack Torrance. He has personality, plenty of flaws, and he’s just like every John Doe next door. Stephen King does an excellent job describing Jack’s descent into madness. Danny is another great character.

He’s timid and shy and a small kid, but at the same time he’s the most powerful of all characters, with a gift that might be their only chance to escape. And then of course, the most interesting character of all. The Overlook. Because the way Stephen King describes the hotel, it’s not just a hotel. It’s a person, a living and breathing thing with as sole desire to make sure the Torrances never leave. Suspenseful from the get-go, thrilling and terrifying, this is a great novel.
You can find more here:

There are two nearly undeniable truths about Stanley Kubrick's version of Stephen King’s The Shining. Truth number one is that The Shining is an absolutely terrifying horror movie. One of the classics of the genre. The second truth is that Stephen King hates that movie with the fiery passion of 1,000 burning suns. King has made no secret that while many fans love that movie, he really thinks Kubrick missed everything great about his story. And this one thing, in particular. Stephen King’s magnum opus The Dark Tower appears to be on a slow train toward actually becoming a reality, and thanks to this renewed interested in King’s work, Deadline has published an older interview with the author that never saw the light of day when it was originally conducted. In the interview they discuss the numerous books that King has seen turned into films and in doing so he opens up about exactly what his problem was with Kubrick's vision.


The character of Jack Torrance has no arc in that movie. Absolutely no arc at all. When we first see Jack Nicholson, he’s in the office of Mr. Ullman, the manager of the hotel, and you know, then, he’s crazy as a shit house rat. All he does is get crazier. In the book, he’s a guy who’s struggling with his sanity and finally loses it. To me, that’s a tragedy. In the movie, there’s no tragedy because there’s no real change.

King does recognize that, as a visual spectacle, the movie has some amazing aspects to it, but he calls it a "big beautiful Cadillac with no engine." In this case, the engine is that lack of character arc. In the film, Jack Torrance is not a sympathetic character. As King says, he’s already crazy and he only goes crazier. In King’s novel, one actually feels bad watching Jack go crazy because they know he’s ultimately a good man.

The reader fears what will happen to Jack, as well as his family. In Kubrick’s The Shining, Jack Torrance is essentially Jason Voorhees, and the only question is whether his family will get out alive. While Stephen King is one of the film’s detractors, many fans put The Shining among Stanley Kubrick’s great works. It is a visually stunning and legitimately scary work of fiction. Taken by itself, without comparing it to it’s source, there’s little you can say is actually wrong with the movie that Kubrick made. Although, if there’s any single person who would have the most trouble ignoring the source material, it’s Stephen King, and we suppose we can give him a pass on that. What do you think? Is The Shining a great horror movie or a terrible adaptation? Or is it both at the same time? Let us know your thoughts below.
By Dirk Libbey found here: