Flat-Earther (AND ABSOLUTELY BRAVE AS ALL HECK) Finally Blasts off in Rocket, Crashes and Rushed to the Hospital

Ask any flat earth supporter what their biggest fear is, and it’s likely they’ll tell you some variation of having everything they believe in crashing down. Well, for one unlucky enthusiast, that’s exactly what happened in the most literal sense of the word. Mike Hughes is a particularly outspoken enthusiast whose name may ring a bell.

The most brave Flat Earther enthusiast in the WORLD is Mike Hughes? Or on this FLAT and Domed -  not doomed (by the Firmament) Earth? Is it flat or is it a round jewel in space?
This guy Mike Hughes, he's brave not courageous.

He was willing to do it before hand without fear therefore he's brave!
If he was courageous that means he feared before hand?
Look it up? That's the difference between brave and courageous!

He has dedicated his life to this and so being afraid doesn't even come in to it! I can't publish what I've just wrote so I deleted it. It's not for viewing because I let loose.
Basically noize Tv is out of order for mocking Mike Hughes. He's more brave than most people I've seen holding a stupid looking microphone.
THAT SPEAKS FOR ITSELF!

I'm putting Mike Hughes in the same category as Evil Knievel for his dare devil stunts? It takes a man to do what he's done? Climb in a rocket you've just built on a shoe string budget and blast off in to space and the unknown? Not knowing if you'll live or not, but all that matters is that you get your answer to a "it doesn't matter really " question? 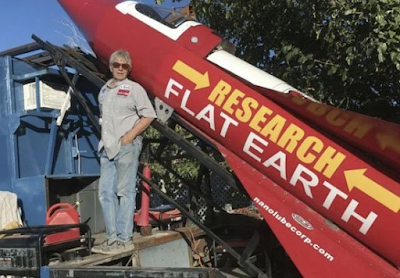 So here's what a recent article had to say about Mike's recent stunt or endeavour to get answers - agree with the post or not that's up to you? There's part's of it that I don't agree with but everyone's allowed their own opinions which I respect in principal only but not independent specifics?


Ask any flat earth supporter what their biggest fear is, and it’s likely they’ll tell you some variation of having everything they believe in crashing down. Well, for one unlucky enthusiast, that’s exactly what happened in the most literal sense of the word. Mike Hughes is a particularly outspoken enthusiast whose name may ring a bell. Hughes was the subject of some headlines from various news outlets across the globe last year when he made an outlandish promise to craft a rocket of his own, one that would take him to such an altitude where he could prove that what he believed in was, in fact, the truth.

Unfortunately, it was far from smooth sailing for Hughes, as his homemade rocket made entirely of scrap metal and costing in the neighbourhood of $20,000 American dollars wasn’t able to sustain the kind of flight he had hoped for. While he was able to successfully launch himself and his rocket off the ground, he spent a total of approximately 4 seconds in the air before his world collapsed around behind him. The rocket came crashing to the ground in the Mojave Desert after a short climb which led to Hughes being rushed to a nearby hospital to treat his injuries. The extent of his injuries is unknown at this time and was not made public to the video.

Despite his serious failure, Hughes, who works as a limousine driver, does deserve some level of applause an admiration. Regardless of your thoughts on Mike’s beliefs and his rather dangerous mission, he showed great courage and determination in going to great lengths to prove his theory, far more than the average flat earth enthusiast can say for themselves.

Hughes later claimed after being examined by doctors that he escaped the crash with nothing but a bad back, and while the authenticity of that statement has been put up for debate, he remains lucky he didn’t sustain after life-threatening injuries as a result of his efforts. His launch reached a top speed of 350 feet and reached a maximum altitude of approximately 1875 feet before things went awry. Parachutes, which Hughes claimed were purchased by NASA, were then deployed allowing him to steer clear of any serious damage. 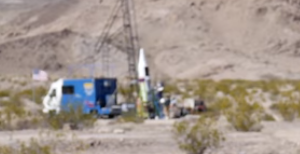 It remains to be seen if Mike will re-evaluate his expedition and plan for another launch in the future, but it seems quite unlikely he will ever find himself capable of constructing a rocket fit for that kind of travel. Video of Hughes’ unsuccessful launch can be seen on YouTube on the Noize TV channel, though it should be noted that the video’s tone makes the entire ordeal out to be a mockery rather than a serious attempt.

Steer clear of the footage if you share a similar viewpoint of the Earth’s shape to Hughes. For the time being, Hughes should be viewed as anything but a coward, for his bravery was no doubt on full display in the desert that way, no matter how foolish his attempt may have been.