The Origins Of Human Beings According To Ancient Sumerian Texts

The Sumerian creation myth can be found on a tablet in Nippur, an ancient Mesopotamian city founded in approximately 5000 BC. Sumerian mythology claims that, in the beginning, human-like gods ruled over Earth. When they came to the Earth, there was much work to be done and these gods toiled the soil, digging to make it habitable and mining its minerals. The texts mention that at some point the gods mutinied against their labor.

Sumer, or the ‘land of civilized kings’, flourished in Mesopotamia, now modern-day Iraq, around 4500 BC. Sumerians created an advanced civilization with its own system of elaborate language and writing, architecture and arts, astronomy and mathematics. Their religious system was a complex one comprised of hundreds of gods. According to the ancient texts, each Sumerian city was guarded by its own god; and while humans and gods used to live together, the humans were servants to the gods.

The Sumerian creation myth can be found on a tablet in Nippur, an ancient Mesopotamian city founded in approximately 5000 BC. The creation of Earth (Enuma Elish) according to the Sumerian tablets begins like this:


When in the height heaven was not named, And the earth beneath did not yet bear a name, And the primeval Apsu, who begat them, And chaos, Tiamut, the mother of them both Their waters were mingled together, And no field was formed, no marsh was to be seen; When of the gods none had been called into being, And none bore a name, and no destinies were ordained; Then were created the gods in the midst of heaven, Lahmu and Lahamu were called into being...

Sumerian mythology claims that, in the beginning, human-like gods ruled over Earth. When they came to the Earth, there was much work to be done and these gods toiled the soil, digging to make it habitable and mining its minerals. The texts mention that at some point the gods mutinied against their labor.
When the gods like men Bore the work and suffered the toll The toil of the gods was great, The work was heavy, the distress was much.

Anu, the god of gods, agreed that their labor was too great. His son Enki, or Ea, proposed to create man to bear the labor, and so, with the help of his half-sister Ninki, he did. A god was put to death, and his body and blood was mixed with clay. From that material the first human being was created, in likeness to the gods.


You have slaughtered a god together With his personality I have removed your heavy work I have imposed your toil on man.

In the clay, god and man Shall be bound, To a unity brought together; So that to the end of days The Flesh and the Soul Which in a god have ripened – That soul in a blood-kinship be bound.

This first man was created in Eden, a Sumerian word which means ‘flat terrain’. In the Epic of Gilgamesh, Eden is mentioned as the garden of the gods and is located somewhere in Mesopotamia between the Tigris and Euphrates rivers.

Initially human beings were unable to reproduce on their own, but were later modified with the help of Enki and Ninki. Thus, Adapa was created as a fully functional and independent human being. This ‘modification’ was done without the approval of Enki’s brother, Enlil, and a conflict between the gods began.


Enlil became the adversary of man, and the Sumerian tablet mentions that men served gods and went through much hardship and suffering. Adapa, with the help of Enki, ascended to Anu where he failed to answer a question about ‘the bread and water of life’.

Opinions vary on the similarities between this creation story and the biblical story of Adam and Eve in Eden. Featured image: Sumerian chaos monster and sun god. (Wikipedia) Note: Ancient Sumerian translations were taken from William Bramley’s book, The Gods of Eden. 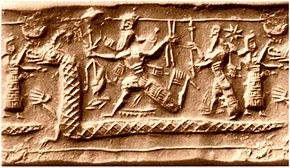 Neo-Assyrian cylinder seal impression from the eighth century BC identified by several sources as a possible depiction of the slaying of Tiamat from the Enûma Eliš.

The best references to the Ancient Mesopotamian religion is obviously Wikipedia because for one thing it deals with ONLY the facts and not anyone's "own" opinions and input which could quite easily be misinterpreted as a maybe or a misconception of the actual truth? It's this which we always want to avoid so we generally pick Wikipedia for our first port of call when it comes to researching the full truth behind a legend or a story of ancient times?


Because Wikipedia only wants you to submit truth, facts and scientific researched answers that makes it perfect for research for anyone who wants to start out on their own voyage so-to-speak in finding for themselves the righteous and the whole truth and nothing but the truth? Also, Wikipedia is a public editing platform so if someone changes any of the script(s) on the site, well anyone can come along and change it back or change the obscure to a fact in an instant? It's always being monitored that way which is cool!

Mesopotamian religion refers to the religious beliefs and practices of the civilizations of ancient Mesopotamia, particularly Sumer, Akkad, Assyria and Babylonia between circa 3500 BC and 400 AD, after which they largely gave way to Syriac Christianity. A few traces remained among Assyrian communities in isolated pockets of what had been Assyria until the 10th century AD.

The religious development of Mesopotamia and Mesopotamian culture in general was not particularly influenced by the movements of the various peoples into and throughout the area, particularly the south. Rather, Mesopotamian religion was a consistent and coherent tradition which adapted to the internal needs of its adherents over millennia of development.

The earliest undercurrents of "Mesopotamian religious thought" date to the mid 4th millennium BC, and involved the worship of forces of nature as providers of sustenance. In the 3rd millennium BC objects of worship were personified and became an expansive cast of divinities with particular functions. That is an amazing understanding of such an ancient religion?

The last stages of Mesopotamian polytheism, which developed in the 2nd and 1st millenniums, introduced greater emphasis on personal religion and structured the gods into a monarchical hierarchy with the national god being the head of the pantheon. Mesopotamian religion finally declined with the spread of Iranian religions during the Achaemenid Empire and with the Christianization of Mesopotamia.