Ancient Aliens On Mars? Do These NASA Images Show Statues On The Red Planet and if so does that mean we're not alone in the universe or does it mean that at one point in history there was a race or species of beings once thriving (as it looks like they had a civilization with statues and who knows what else?).

This really could be a structure on Mars? It look's intelligently made at one time or another? It has recognizable features on it that makes one think that this could of easily been made by hands of an unknown person from an unknown race of Aliens, maybe? It looks like a tank turret.

Mars continues to surprise UFO hunters around the globe, who are convinced Mars was once inhabited, and the evidence is right here. Thanks to the countless images beamed back to Earth from NASA’s Curiosity, and Opportunity Rover, we’ve been able to explore Mars like never before.

Despite the fact that we have learned a lot about Mars, that it was a planet eerily similar to Earth, with Rivers, Lakes, Oceans, and even an atmosphere, there are many mysteries waiting to be revealed?

After going through a vast number of images posted by NASA in their online archives, UFO hunters claim to have spotted a mysterious ‘artificial’ structure on Mars. More precisely, they say they’ve spotted a statue on Mars. And not just an statue, the statue of an ‘Ancient Alien God’.

But is it really proof ancient aliens landed on Mars? Or is this image just another one of the countless images from Mars that only look like something familiar because of our brain playing tricks on us? If you ask Dr. John Brandenburg, a former NASA employee there’s more to Mars than what we’ve been told, and UFO hunters claiming to have spotted artificial structures on Mars aren’t crazy.

Dr. John Brandenburg, a plasma physicist who got his degree from UC Davis and who has seemingly had a distinguished career as a scientist argues that Martian life was purposefully destroyed with nukes; “Mars xenon is found to closely match the component in the Earth’s atmosphere produced by Earth’s nuclear weapons programs, both hydrogen bomb testing and plutonium production, both of which involve large amounts of fission with fast neutrons.

It is found that Mars xenon can be approximately by a mixture of 70% Nuclear Testing xenon, mixed with 30% natural Earth xenon, suggesting that Mars xenon was similar to Earth’s before a large nuclear event altered it dramatically.”

However, Albert “Bert” Newton Stubblebine III a United States Army major general whose active duty career spanned 32 years also spoke out about Mars, and what’s really there. Albert “Bert” Newton Stubblebine is credited with redesigning the U.S. Army intelligence architecture during his time as commanding general of the U.S. Army Intelligence and Security Command (INSCOM) from 1981 to 1984, after which he retired from active service.


The statements made above really make you wonder whether it’s actually possible that some sort of intelligence existed on Mars in the distant past, and if it really is still there doing whatever with those machines? However, not everything may be pseudoscience after all because as it turn's out we here at UFO Sightings Footage have done our own research and guess what we found? The very exact same thing as mentioned just then! We have seen machines, landing and underground doorways or entrances to the inner parts of the Red planet! This is why the following image snapped on Mars is regarded as one of the many smoking guns which proves the surface of Mars is covered in ancient ruins of a once great ancient civilization. 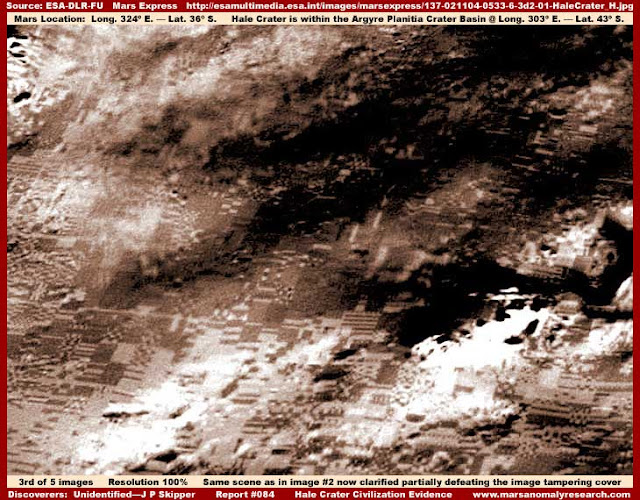 For a researcher worth his or her salt, this faintly seen but definite organized pattern evidence is the clue that indicates the need for closer examination