Strontium Atomic Clock Is So Precise It Won't Lose a Second for 15 Billion Years!

Atomic clocks typically work by measuring the vibration frequency of atoms, such as strontium or cesium, as the atoms jump between different energy levels. Every atom naturally oscillates at very high frequencies billions or trillions of times per second. Counting these regular beats provides a highly precise measure of time. Currently, a cesium clock at NIST defines the second, where 1 second is 9,192,631,770 oscillations of the cesium atom. In the new clock, thousands of strontium atoms at extremely cold temperatures are essentially pinned into a narrow column by intense laser light.

An atomic clock that sets the time by the teeny, tiny oscillations of strontium atoms has gotten so precise and stable that it will neither gain nor lose a second for the next 15 billion years. The strontium clock, which is about three times as precise as the previous record holder, now has the power to reveal tiny shifts in time predicted by Einstein's theory of relativity, which states that time ticks faster at different elevations on Earth. That precision could help scientists create ultra-detailed maps of the shape of the Earth.

"Our performance means that we can measure the gravitational shift when you raise the clock just 2 centimeters (0.79 inches) on the Earth's surface, study co-author Jun Ye, a physicist at JILA, a joint institute of the National Institute of Standards and Technology and the University of Colorado, Boulder, said in a statement".
The team also improved how closely the ticks matched one another, a metric called its stability, by almost 50 percent.

Follow this link:
(5 of the Most Precise Clocks Ever Made) 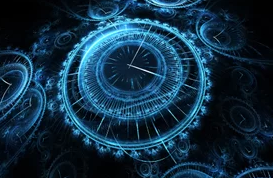 Extract from that post:
Most timepieces people use to tell time are accurate to within 10 or 15 seconds every month. Fancy mechanical watches (like a Rolex) will be off by more — a second or two each day. Scientists need something much more precise and accurate, because the phenomena they measure often last just billionths of a second.

Continued...
Insane precision
Atomic clocks typically work by measuring the vibration frequency of atoms, such as strontium or cesium, as the atoms jump between different energy levels. Every atom naturally oscillates at very high frequencies billions or trillions of times per second. Counting these regular beats provides a highly precise measure of time. Currently, a cesium clock at NIST defines the second, where 1 second is 9,192,631,770 oscillations of the cesium atom. In the new clock, thousands of strontium atoms at extremely cold temperatures are essentially pinned into a narrow column by intense laser light.


To measure time, the clock hits those atoms with just the right frequency of red laser light to make the atoms jump energy levels. The previous version of the clock used a similar technique. On this occasion, however, the researchers improved the design by eliminating measurement errors related to an external source of electromagnetic radiation known as black-body radiation, which is given off by opaque objects held at constant temperatures. The team placed radiation shields around the device, as well as platinum thermometers inside the clock's vacuum tube, to better account for the extra heat. The researchers also improved their calculations of how much radiation would be generated. The new clock can also be operated at room temperature, as opposed to the cryogenic temperatures used in past versions.

"This is actually one of the strongest points of our approach, in that we can operate the clock in a simple and normal configuration while keeping the black-body radiation shift uncertainty at a minimum."


Ye said. (Black-body radiation can affect the atom's energy level, which then affects the tick rate.) The new record holder won't lose a second over the current age of the universe. But strontium atoms beat at 430 trillion times per second, so theoretically, at least, there's room for more improvement.
*****
Getting better all the time: JILA strontium atomic clock sets new records! Follow the link just provided to see new posts on this fascinating and "extraordinary" new invention and see how it evolved from the humble beginnings and also see how the first "horology pioneers" entered in to a time race (that they probably never knew about) and just how important finding the precise and accurate time, would help them get to the Moon and beyond?
*****
Relativistic measurements
The new clock is so precise that it can detect relativity in action at incredibly small scales. In a concept known as gravitational time dilation, time passes more quickly in weaker gravitational fields, so the higher the altitude on Earth, the lower the gravity is there — and the faster time is passing. The current clock is so sensitive that it could detect these effects with elevation changes as little as that caused by putting a small book under the clock. If the clock can improve further, that would enable more detailed measurements of the Earth's shape. Currently, instruments like tidal gauges and gravimeters perform this task.