In 1944 in west Virginia in the US a small boy was stoking his families coal furnace when a piece of coal fell and broke open only to reveal a really odd thing, a bell. To be specific there was a brass bell which has been verified as been unique with unusual characteristics all in itself? It is said that the bell could be as old as 300 million years old? To appreciate this story you need to read this.

In 1944, as a ten year old boy, Newton Anderson was fueling the coal furnace in his parent’s home. He dropped a lump of coal onto the basement floor and it broke in half, revealing that it contained this bell inside. The bituminous coal that was mined near his house in Upshur County West Virginia is supposed to be about 300 million years old!


What is a brass bell with an iron clapper doing in coal ascribed to the Carboniferous Period? According to Norm Sharbaugh’s book Ammunition (which includes several “coal anecdotes”) the bell is an antediluvian artifact (made before the Genesis Flood). The Institute for Creation Research had the bell submitted to the lab at the University of Oklahoma. There a nuclear activation analysis revealed that the bell contains an unusual mix of metals, different from any known modern alloy production (including copper, zinc, tin, arsenic, iodine, and selenium). 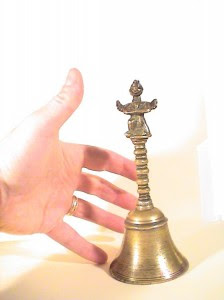 Genesis 4:22 states that Tubal-Cain was “an instructor of every artificer in brass and iron.” Perhaps when his civilization came to an end in the flood, one of his bells was buried with a mass of vegetation that became coal and ended up thousands of years later in Newt Anderson’s coal bin. The bell was prominently featured in the 1992 CBS docudrama production called Ancient Secrets of the Bible and is now part of the Genesis Park collection. 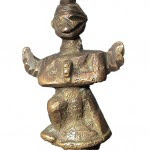 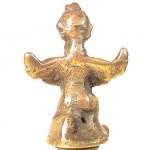 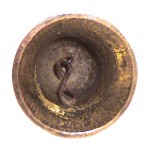 Later on, Newton Anderson spent a great deal of time researching the figure atop the bell. He discovered similarities to the Babylonian Southwest Wind Demon, called Pazuzu. The demon typically is shown with a prominent headpiece like the bell figure. Indeed the bell’s headpiece clearly is broken off, signifying that it may have been quite a bit taller. The Hindu deity Garuda is sometimes depicted on top of bells, as is the Egyptian Isis.

The kneeling posture with hands clasped is quite like Garuda representations. Because of this, some have argued that it must be an Indian Ghanta Bell. But ancient religious worship seems to take on similar forms in various cultures (like the Venus figurines from disparate lost cultures and the ancient fascination with pyramids), which doesn’t necessitate that they were culturally related. At our request, Mr. Anderson was examined by an expert polygraph specialist (who works with death row inmates) to further validate his claims. He passed the test and the report can be seen here.

In 2011 Genesis Park staff participated in locating the mine where the coal containing the bell artifact was dug. An updated article has been published on the significance of this find.
Source: 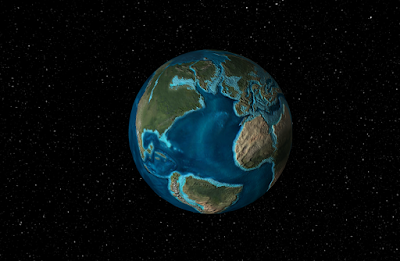 During its dramatic 4.6 billion year history, Earth has gone through a series of major geological and biological changes.

Here is the timeline of our Earth, the place we call home. There's been many, many changes that have gone on in this time period? Some stuff will never, ever be revealed and some stuff shall never be unearthed, not that they don't exist just that nobody will ever find, discover or uncover it? Who knows what that could be from treasure to the proof of ancient advanced civilisations? Earth has and will always have many mysteries about it? It's just that old that there will always be stuff being unearthed, literally.

This is how old the Earth is and anything could of happened in these time periods?

What a beautiful thing that humans are able to even put a timeline to the place we call home? That in itself is a really big achievement and that means were capable of dating objects and so I ask the question, is the bell found in the piece of coal actually from 300 million years ago? Between the Dinosaurs evolving and the earliest Reptiles coming on to the Earth? Who knows who or what was here back then besides the indigenous species could there really of been an advanced thinking civilization of metal working beings?

I suppose we might just never know or until another one turns up with a few more bread crumbs of evidence for us to work with?