Ancient Astronaut Figure Carved In To Cathedral Has Been SOLVED!

Here is the answer to the Spanish cathedral astronaut carved in to it's walls. The answer might not sit well with you unless your open minded and don't get easily mind blown? 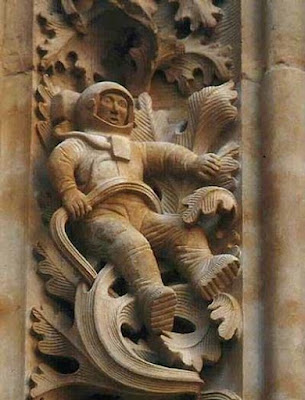 Hold on to your hats because we've got a real doozy for you! You know how we love any and all ancient historic anomalies here at UFO Sightings Footage yes? We also like it when we can give a real ending to a conspiracy once and for all to our readers and followers, it's only right that as we learn so do you guys, actually it's pretty much you guys who put us right 99% of the time, lol. This is one of them times where we have found the answer to a rising and very popular cathedral conspiracy in the city of Salamanca in Spain.

Here's the legend:
In the city of Salamanca, Spain, there is a cathedral that was constructed in 1102 CE, making it one of the oldest in the world. Like many other cathedrals, the walls have been decorated with many wonderful carvings of saints, demons, and various other objects? One of which is very unusual. The carving appears to very clearly be of an 20th century astronaut! How did it get there? Did a twelfth century artist predict the future?

Here's the answer:
The carving is, in fact, an astronaut. It was added to the structure in 1992 by Jerónimo García, who was the man in charge of restoration work being done to the cathedral. He also added a gargoyle eating an ice cream cone, as shown in the following picture: 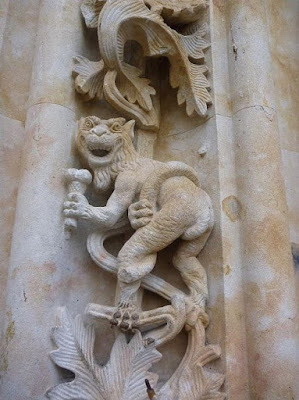 Personally though I don't care either way it looks amazing and that's all that matters! It is a shame though because according to our research the astronaut carving on this cathedral, there's more damage done to it since the images above were taken?


That's the only thing about this which I am really bothered about. I'm not bothered that it turned out to be a modern carving because that's what we do, we search for the truth and the stories behind said article?
We researched our information here.
And here.