Theres no doubt that these are real metal pipes in the shape of metal pipes obviously stating that the people who used them were definitely intelligent beings most probably highly advancved beings with an advanced civilisation?Analysis of the "rusty scraps" by Liu Shaolin at a local smelters reportedly found that they consist of 30 percent ferric oxide and large amounts of silicon dioxide and calcium oxide. Many other iron pipes can be found scattered on sands and rocks. 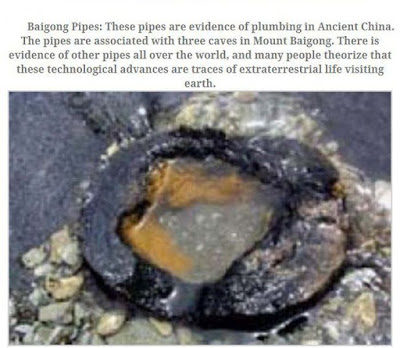 The Baigong Cave in China is the location of numerous ancient underground 'metal pipes' that were discovered in the beginning of the 20th century. Traditional science has provided one or two explanations for their presence, but as yet there is no definite answer as to how or why the pipes exist where they do, as they run through the ground and even into the nearby lake. There is no evidence of an associated pyramid, as is normally reported, but the idea that they are fossilised tree roots remains unsatisfactory making the Baigong pipes one of todays more interesting modern O.O.P.Arts. 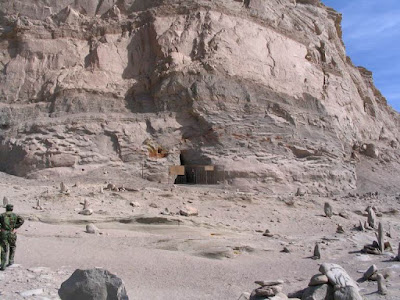 The Baigong Pipes are reported to be associated with a “pyramid” about 50 to 60 metres (160 to 200 feet high) built on 'Mount Baigong'. The front of the “pyramid” is reported to contain three caves. The mouths of the two smaller caves have collapsed. Only the largest cave, which is 6 metres (18 feet) high, can be entered. Two Baigong Pipes have been reported from the largest cave. One of these is described as being 40 cm (16 in) in diameter and preserved as a reddish-brown “half-pipe”. Within the same cave, another pipe-like feature of similar diameter was also found. “Dozens” of upright pipe-like features, about 10 to 40 cm (4 to 16 inches) in diameter, were also found protruding from Mount Baigong above the largest cave.

It should be immediately noted that the word 'Baigong' means 'Hill' in the local dialect, so it isn't worth looking for 'Mount Baigong' on any map. In addition, there is absolutely no evidence of a pyramid anywhere, the 'pyramid' is actually an escarpment by Toson Lake. Near the foot of an escarpment (Mt. Baigong) by Toson Lake lie three caves, the largest and most accessible some eight meters high by six meters deep. Inside, spanning from the roof to the back end of the cave, runs a pipe 40 cm in diameter. Another one roughly the same size runs into the earth from the floor, with just the top protruding. 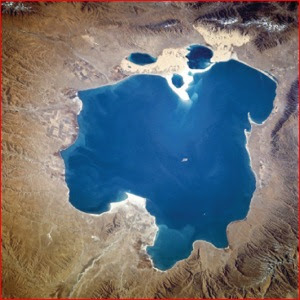 (Note the 'Alien Grey' head in the water)

Associated with these pipe-like features are "rusty scraps" and "strangely shaped stones".

Analysis of the "rusty scraps" by Liu Shaolin at a local smelters reportedly found that they consist of 30 percent ferric oxide and large amounts of silicon dioxide and calcium oxide. Many other iron pipes can be found scattered on sands and rocks.

They run in an east-west direction with a diameter between 2 and 4.5 centimetres. They are of various strange shapes and the thinnest is like a toothpick, but not blocked inside after years of sand movement. Stranger still is that there are also some pipes in the lake, some reaching above water surface and some buried below, with similar shapes and thickness with those on the beach. 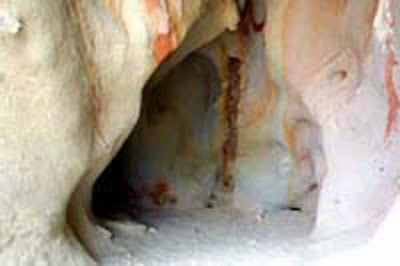 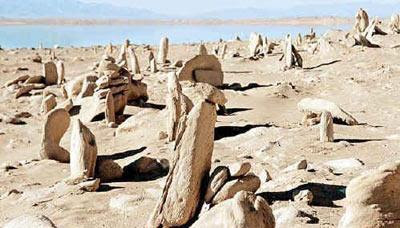 The pipes were first discovered by a group of U.S. scientists on the trail of dinosaur fossils, who reported them to the local authorities in Delingha. They were ignored until a report, possibly one of six made, by Ye Zhou, appeared in the "Henan Dahe Bao" (河南大河报 Henan Great River News) in June of 2002. Soon after, Quin Jianwen, a local official, discussed the pipe-like features with journalists of the Xinhua News Agency on June 16, 2002.

The local government has promoted the pipe-like features as a tourist attraction with road signs and tourist guides. In 2002, expeditions to study the Baigong Pipes were reportedly planned. Anonymous (2002a, 2002b) reported that a group of nine Chinese scientists were to visit and study them in June 2002. A group of researchers from the Beijing UFO Research Association were making preparations to visit and study these pipe-like features. This group was to be composed of 10 experts, 10 journalists, and film team from CCTV (China Central Television).

A group of nine Chinese scientists will go to west China's Qinghai Province this month to closely examine the relics thought by some to have been left by extraterrestrial beings (ET). It will be the first time scientists seriously study the mysterious site near Delingha City in the depths of the Qaidam Basin, according to government sources with the Haixi Mongolian and Tibetan Autonomous Prefecture, where Delingha is located. The site, known by local people as "the ET relics", is on Mount Baigong about 40 kilometres to the southwest of Delingha City. On the north of the mountain are twin lakes dubbed as the "lover Lakes", one with fresh water and the other with salty water.

The so-called ET relics structure is located on the south bank of the salty lake. It looks like a pyramid and is between 50 to 60meters high. At the front of the pyramid are three caves with triangular openings. The two smaller caves have collapsed and are inaccessible but the cave in the middle is the biggest, with its floor standing two meters above the ground and its top eight meters above the ground. This cave is about six meters in depth. Inside there is a half-pipe about 40 centimetres in diameter tilting from the top to the inner end of the cave. Another pipe of the same diameter goes into the earth with only its top visible above the ground. Above the cave are a dozen pipes of various diameters which run into the mountain.

All the pipes are red brownish, the same colour as that of surrounding rocks. Scattered about the caves and on the bank of the salty lake area large number of rusty scraps, pipes of various diameters and strangely shaped stones. Some of the pipes run into the lake. According to Qin Jianwen, head of the publicity department of the Delingha government, the scraps were once taken to a local smeltery for analysis. The result shows that they are made up of 30 percent ferric oxide with a large amount of silicon dioxide and calcium oxide. Eight percent of the content could not be identified. "The large content of silicon dioxide and calcium oxide is a result of long interaction between iron and sandstone, which meansthe pipes must be very old," said Liu Shaolin, the engineer who did the analysis.