Would you have thought that there is multiple real Zombie examples on this planet? Actual animals infected with a Zombie virus and insects that are diseased by Fungus's and other insects that kill one another. This world has a really scary way of preserving it's own future? Or should I say the animals on Earth have some very decrepit and unusual but ingenious and terrifying ways of securing the futures for it's offspring? Some eat earth other and some, yes some... Actually infect anther insect with a virus or disease and make them carry their young or actually make them carry their young and they become a pact lunch also for their young when they eventually emerge? That's just absolutely disgusting but very self serving indeed. Is it scary, Hell yes! Is it necessary, I couldn't tell you if there's another way to survive? Is it fascinating ABSOLUTELY!

Everywhere one look's on this wonderful but cryptic and very strange Planet there's an abundance of weird and genius also instinctive behaviours being played out every single day? Some of these odd behaviours are so bizarre that it has humans running scared and thinking of nightmarish scenarios which have then manifested in to the movies, like Zombie films and TV shows The Walking Dead.

That is because such animals and insects have a very bizarre survival mechanism or way of ensuring their offspring survive and some even thrive, yes thrive? In what would probably be normal to the insects but to us it's very, very Hellish and totally disgusting! Living inside a body, eating the insides from the inside out! Scale it up to animals and then to humans we have a #Zombie? Just read the following post and you will get the EXACT and FULL picture?

WARNING
This is a Zombie Area!
What's the possibility of a Zombie #Virus really being created by scientists? I found a really good post from a while ago and thought that this is a great time to bring this back?

WHERE SHOULD I GO IF THE ZOMBIE APOCALYPSE EVER HAPPENS FOR REAL?

In West African and Haitian voodoo, zombies are humans without a soul, their bodies nothing more than shells or a vessel controlled by powerful sorcerers. In the 1968 film Night of the Living Dead, an army of shambling, slow-witted, cannibalistic corpses reanimated by radiation attack a group of rural Pennsylvanians. We are looking for something a little in between Haiti and Hollywood: an infectious agent, a zombie virus if you will, that renders its victims half-dead but still-living shells of their former selves.

An effective agent would target, and shut down, specific parts of the brain, says Steven C. Schlozman, an assistant professor of psychiatry at Harvard University and author of The Zombie Autopsies, a series of fictional excerpts from the notebooks of "the last scientist sent to the United Nations Sanctuary for the study of ANSD," a zombie virus.

Schlozman explained to PopSci that although the walking dead have some of their motor skills intact—walking, of course, but also the ripping and tearing necessary to devour human flesh—the frontal lobe, which is responsible for morality, planning, and inhibiting impulsive actions (like taking a bite out of someone), is nonexistent. The cerebellum, which controls coordination, is probably still there but not fully functional. This makes sense, since zombies in movies are usually easy to outrun or club with a baseball bat.

The most likely culprit for this partially deteriorated brain situation, according to Schlozman, is as simple as a protein. Specifically, a proteinaceous infectious particle, a prion. Not quite a virus, and not even a living thing, prions are nearly impossible to destroy, and there's no known cure for the diseases they cause.

The first famous prion epidemic was discovered in the early 1950s in Papua New Guinea, when members of the Fore tribe were found to be afflicted with a strange tremble. Occasionally a diseased Fore would burst into uncontrollable laughter. The tribe called the sickness "kuru," and by the early '60s doctors had traced its source back to the tribe's cannibalistic funeral practices, including brain-eating.

Prions gained notoriety in the 1990s as the infectious agents that brought us bovine spongiform encephalopathy, also known as mad cow disease. When a misshapen prion enters our system, as in mad cow, our mind develops holes like a sponge. Brain scans from those infected by prion-based diseases have been compared in appearance to a shotgun blast to the head.

Now, if we're thinking like evil geniuses set on global destruction, the trick is going to be attaching a prion to a virus, because prion diseases are fairly easy to contain within a population. To make things truly apocalyptic, we need a virus that spreads quickly and will carry the prions to the frontal lobe and cerebellum. Targeting the infection to these areas is going to be difficult, but it's essential for creating the shambling, dim-witted creature we expect.

Jay Fishman, director of transplant infectious diseases at Massachusetts General Hospital in Boston, proposes using a virus that causes encephalitis, an inflammation of the brain's casing. Herpes would work, and so would West Nile, but attaching a prion to a virus is, Fishman adds, "a fairly unlikely" scenario. And then, after infection, we need to stop the prion takeover so that our zombies don't go completely comatose, their minds rendered entirely useless. Schlozman suggests adding sodium bicarbonate to induce metabolic alkalosis, which raises the body's pH and makes it difficult for proteins like prions to proliferate. With alkalosis, he says, "you'd have seizures, twitching, and just look awful like a zombie."

The Cockroach getting infected by the Parasitic Wasp!
Before they appeared in movies, zombies played an important role in voodoo (or vodoun) culture in West Africa and Haiti. The word probably comes from nzambi, which roughly translates to, "spirit of a dead person." Zombies are humans without a soul. In the early 1980s, ethnobotanist Wade Davis proposed that zombies were more than mere witchcraft and folklore, and that zombie powder found in Haitian ceremonies might be derived from tetrodotoxin, a powerful neurotoxin that blocks nerve channels.

Davis drew his hypothesis partially from real-world examples such as the female jewel wasp (pictured), which injects its tetrodotoxin into a cockroach's brain, shutting down the roach's fight-or-flight response. The wasp then leads the drugged bug into its burrow, lays its eggs upon the cockroach's abdomen and, eight days later, the larvae hatch and feed upon the roach, burrowing into its innards. The cockroach is alive throughout and under the wasp's control. 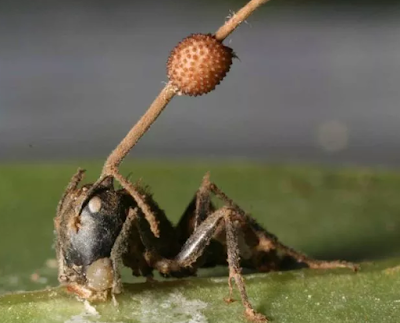 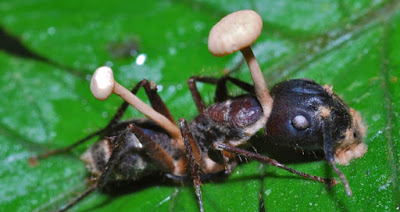 These two sorry buggers are done for. They've been attacked a Fungus and turned in to a statue!
Leaf-cutter ants in Southeast Asia have their minds controlled by an infectious fungus called Ophiocordyceps unilateralis, which makes the ant walk to the perfect position in the forest before killing its host, bursting through the ant's skull, and releasing its spores into the forest. 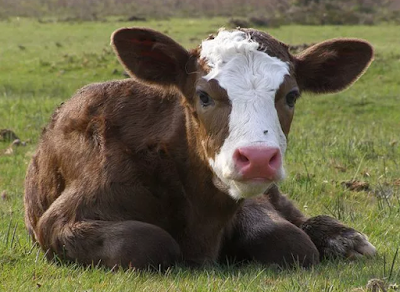 What we think about when we think about zombies today can be traced back to a single source: the 1968 film Night of the Living Dead. In it, an army of flesh-eating corpses reanimated by radiation attack a group of rural Pennsylvanians. Though the word "zombie" is never actually uttered, the movie's shambling, slow-witted, cannibalistic undead remade the zombie for the nuclear age. Today, zombism is most often portrayed on screen as the symptoms of a virus pandemics have replaced the threat of nuclear war.

These shuffling movie zombies have partially deteriorated, but still intact, brains, a condition which could be caused by a protein called a proteinaceous infectious particle, or prion. Prions are the infectious agents that brought us mad cow disease. When a misshapen prion enters our system, as in the case of mad cow, the rest of our prions take on its shape and the mind literally begins turning into mush.

Relatives of victims of prion-caused diseases have looked at MRI's of their loved ones' skulls and likened the scene to a shotgun blast to the head. And since prions aren't even alive, they are nearly impossible to destroy. There are no known cures for prion-based diseases, and the proteins can still infect others years after their host-victim has died. The United Kingdom mandated that those killed by mad cow disease be buried in graves at least nine feet deep. 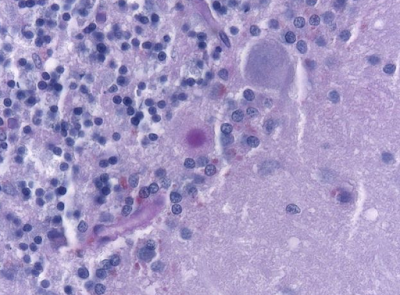 Prions began to be linked to zombie-like diseases in the early 1950s, when Australian administrators were exploring the Eastern Highlands Province of Papua New Guinea and discovered that members of the Fore tribe had been afflicted with a strange tremble, occasionally punctuated with bursts of uncontrollable laughter. The tribe called the disease kuru, and by the early '60s Australian doctor Michael Alpers had traced its source back to the Fore's cannibalistic funeral practices, especially brain eating. 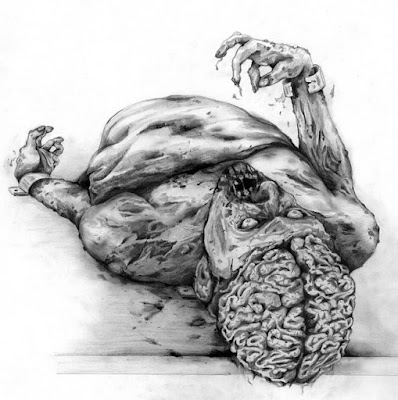 Steven C. Schlozman bases the zombie virus on prions in his new book, The Zombie Autopsies, a series of excerpts from the fictional notebooks of one Stanley Blum, "the last scientist sent to the United Nations Sanctuary for the study of ANSD," the zombie virus (which Schlozman has dubbed ataxic neurodegenerative satiety deficiency syndrome). Schlozman, an assistant professor of psychiatry at Harvard, explained to PopSci that the frontal lobe in a zombie is probably nonexistent. The cerebellum, which controls coordination, is intact but not fully functional. Schlozman agrees that prions are a good bet for creating a zombie-like state in a human. "How do we massively disseminate prions?" Schlozman asks. "We don't know yet." Andrea Sparacio (from The Zombie Autopsies) 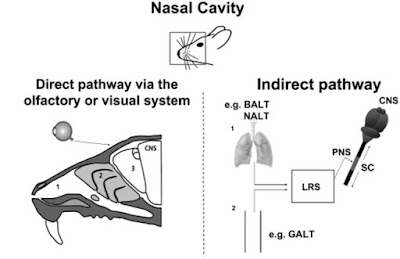 Prions aren't airborne...yet. But a new study from a group of pathologists in Zurich, Switzerland took concentrations of aerosolized prions and exposed mice to the spray. It turned out to be 100 percent lethal. Johannes Haybaeck et al.

Would you have thought that there is multiple real Zombie examples on this planet? Actual animals infected with a Zombie virus and insects that are diseased by Fungus's and other insects that kill one another. This world has a really scary way of preserving it's own future? Or should I say the animals on Earth have some very decrepit and unusual but ingenious and terrifying ways of securing the futures for it's offspring?