The Gates To Hell have been found and they are both in Paris France can you believe that? Well get ready for a scary and very real human story of more than 6 million peoples and the art world coming together. The gates to Hell are very real, get ready to see the very Gates To Hell. 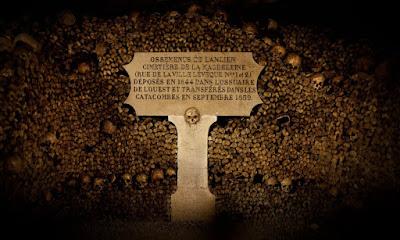 Wow, the Door and Gate To Hell have been found and it's exactly where some people may have known about it to be for a very, very long time? Not that they're from there or that they've been there or going there it's more like it's a known mystery or it's an old wives tale type thing? Last time the gate to Hell was left ajar, the great plague occurred.

Yes I'm talking the catacombs of Paris! That's why I say some people might know about it as the Parisians usually refer to the catacombs as the Gates To Hell. 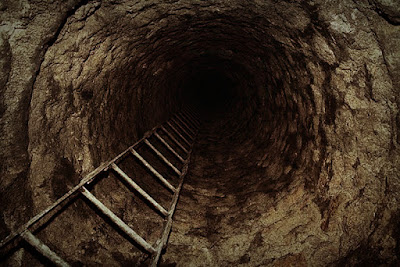 So, now that we have the location of the Gates To Hell understood (Paris) now we need to understand why it's called such a terrifying thing? It's because it has over 400 miles of tunnels and has over 6 million human skeletons within them 400 miles of catacombs! That is unbelievable and the biggest catacombs in the world as you'd expect really? Because there's so many peoples bodies in there and people have been tucked away in the catacombs for over 10 centuries, yes 10 centuries this is why the catacombs of Paris have got the nick name of The Gates To Hell.

They line the way on the last journey tortured souls will take, mocking the soul...

I don't recommend being in the catacombs and I don't recommend exploring them neither? There's an actual name for the people who always go there (yes idiots, also) they are called Cataphiles? It leaves nothing to the imagination doesn't it? So why am I writing this post? To show you the eerie, the dank, the human ellement and the afterworld? The deep dark catacombs are not for the feint hearted so you can make up your own mind as to whether or not it is the gates to Hell? 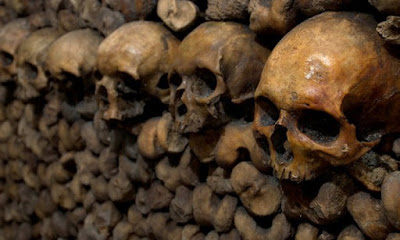 So I found a few horrible facts about this devastating place of human death and human sacrifice. Yes that's right, at one point it is said that human sacrifices were occuring in the catacombs secretly by Satanists and Devil worshippers? Going down in to the catacombs either with the authorities permission or not, if human sacrifice was going on in this place then going down there is a no, no. The human suffering that went on in Paris and the surrounding French villages must of been unimaginable?

Let's not forget about the plague? The plague was killing people in Europe everyday at a rate of thousands per day? The stench alone must of been unimaginable? The Doctors outfits during this time was like nothing ever seen before check this out: 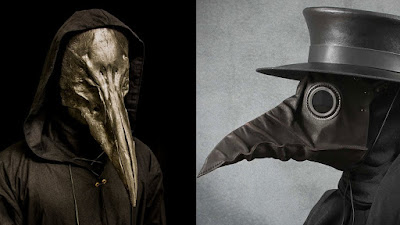 Some say the Doctors would dance in the streets of Paris at night with the dead corpses while they were in these costumes which would give rise to tails of human sacrifices and some say the not all the Doctors dance partners were "willing participants"? Were these so-called dance partners actual murder victims? Nobody would know and nobody would go near the bodies if the Doctor said they were plague victims so... Use your own imagination?

It is the only ossuary in the world, that contains the skeletons of over 6 million people. Apart from the incredible amount of human remains, the Catacombs of Paris have even more impressive history. By the late 10th century, a considerable area of the parish territory was filled with cemeteries. In order to save space (space was at a premium) those who had been buried a long time ago were simply exhumed and replaced with new bodies in the now empty graves. The remains used to be gathered up and stored in the galleries inside of the actual cemetery walls. Eight centuries later, the main cemetery included an over two feet high mound, filled with thousands of many years old skeletons.

By the end of the 18th century it was clear, that the cemetery couldn’t keep up with the constantly growing number of bodies. Human remains belonging to several cemeteries around the city were moved to the Catacombs. However, it wasn’t until 1810 that the ossuary began to take the shape it has today. The head of the Paris Mine Inspection Service at the time, Louis-Etienne Hericart de Thury, came up with the idea of turning the place into a mausoleum.

The actual catacomb tunnels were the remnants of an old mine.

Each skull and bone was placed on top of others, resulting in walls covered in human remains. The so-called “Gate of Hell,” which is Paris official gate, is the beginning of an unforgettable journey. Besides skulls, visitors see engravings and pillars. In certain rooms there are displayed certain minerals found over the years under Paris, as well as tablets with various inscriptions regarding the ossuary. Ever since 1787, when the Count of Artois; the first notable visitor, entered these mysterious tunnels, the Catacombs of Paris have been a popular sightseeing spot. 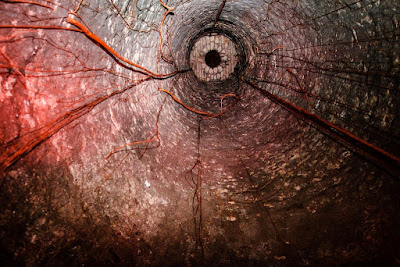 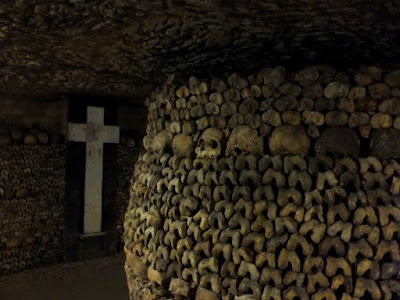 Also, there is an actual door to Hell in Paris so i'll write about that aswell? It's weird how all gates to Hell can be found in Paris don't you think? I think that's by design because how else can you explain all the gates to Hell that are quite literal in one city? It's not an accident or a quirky answer. It's on purpose. Humans can be very Hellish and this is no exception I can tell you.

Just off the rue de Varenne, in Paris’s seventh arrondissement, stands the door to hell. You will be glad to know it is closed. The door is a bronze sculpted by Auguste Rodin. This was the work of a lifetime: he began in 1880 and still did not consider it finished at the time of his death, in 1917. A number of his best-known sculptures were originally created to figure in this apocalyptic tableau. You will find, for instance, a smaller version of The Thinker (who was supposed to represent Dante—which is a kick-ass art trivia question), as well as Francesca and Paolo, the doomed lovers of The Kiss (not quite as good a trivia question, but still not bad). You’ll also find Ugolino as he crawls through the dust, his starving family clinging to his arms, and all kinds of other tormented sinners I won’t describe, but rather leave you to discover on your own.

The door stands just inside the garden of the Rodin museum.
There’s a bench across from the door. 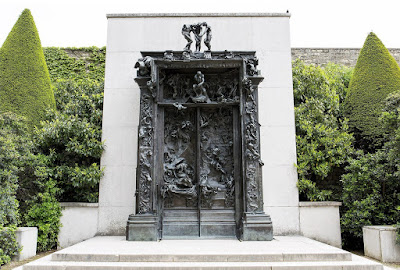 Source of this is from here.

You can’t actually go through the door to hell. Rodin didn’t sculpt it in such a way as to allow it to open. If this frustrates you then you may consider taking a walk south from the Rodin museum to go through a different kind of door and descend into the Paris catacombs, which might suffice as a proxy for hell.