Home
i saw something they didn't
I spotted a UFO

I've Spotted Something They Never Saw - What Do You Think

So this is the post they are talking about, a so-called UFO been hauled across the US on a flatbed truck in full public view. But I saw the actual REAL UFO right in the background directly above the left wing, watching the whole thing?

Is this a guard, guarding the hybrid stealthy craft?

It could be seen as it is guarding it, but nobody got that close for it to do anything and reveal itself so we might never know? I mean how big is a UFO?

If we humans are shrinking all technology to ultra small, I mean extremely small technology can you imagine what could be on this real UFO? Why people never saw it is probably to do with it's size but is not everything! BUT it is there 100% as you can definitely see it and this is the image that is been shared. So it's the real deal.

UFO has been spotted in public in the US on back of truck: 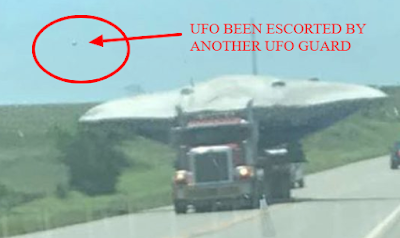 UFO Type Craft Seen Hauled on Large Semi Truck in Ponca City, Oklahoma.
Background On June 3, 2018, a post appeared on Facebook that went viral. It was posted by Ashley Choney, the earliest post I could find when this case file was written, and it shows a photograph of a “UFO” or saucer-like craft on the back of a semi, followed by “20 police cars” (I can't see 20 Police car's can you?) as indicated by the witness. The case was investigated by the creator of The Black Vault, John Greenewald, Jr. Witness Testimony The original Facebook posting, as published on June 3, 2018:

I can still see the little UFO directly above the left wing, can you see it? 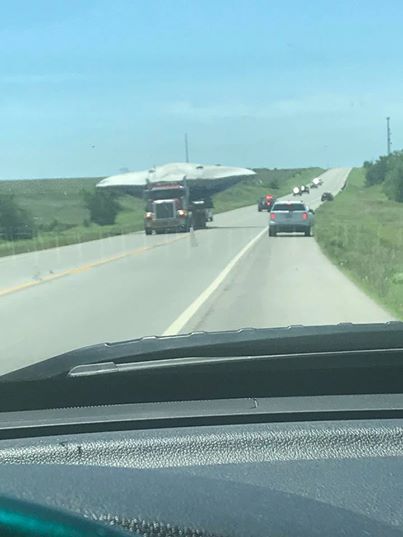 Driving south of Ponca City today and saw this being escorted with about 20 police cars. It’s a spaceship. They exist. You’re welcome. 👽👽👽 I did NOT expect this to get blown up like it has. Many of you have suggested that it is probably just some sort of drone or a movie prop. I’m not sure what it is. I posted it for laughs and only expected a few likes, not several hundred.

The only evidence was the photo updated. Here is the highest resolution available:
The Analysis by John Greenewald, Jr., Founder of The Black Vault / Creator of TBV Investigations There was something eerily familiar when I saw this photograph making it’s rounds. When I am writing this report, the post has had just about 20,000 shares, more than 7,000 likes and more than 3,000 comments. I recalled seeing a post nearly identical to this a few years back, and dug up a December 2011 video from YouTuber Alex Dieguez in the the same exact location as this new posting specifically, Ponca City, Oklahoma.

Obviously it's still there. 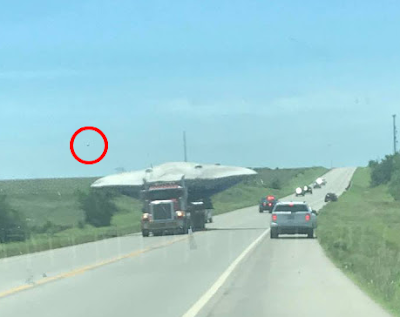 In 2011, when this story and video first circulated, it too went viral. With thousands of shares and likes, it was unknown what was seen that day, but it sparked various news stories and newspaper articles. That is, until Brooks McKinney, senior manager of public relations at Northrop Grumman, closed the mystery. He told Life’s Little Mysteries, a project by the popular LiveScience.com website, that the craft was a transport of the X-47B.

According to Northrop Grumman:

Under a contract awarded in 2007, the company designed, produced and is currently flight testing two X-47B aircraft. In 2013, these aircraft were used to demonstrate the first ever carrier-based launches and recoveries by an autonomous, low-observable relevant unmanned aircraft. In April of 2015, the X-47B once again made aviation history by successfully conducting the first ever Autonomous Aerial Refueling (AAR) of an unmanned aircraft.

AAR unlocks the full potential of what an unmanned surveillance, strike and reconnaissance system can do in support of the Navy. These historical demonstrations solidify the concept of future unmanned aircraft and proved that the X-47B can perform standard missions like aerial refueling and operate seamlessly with manned aircraft as part of the Carrier Air Wing.”

Here's the "REAL UFO" that I saw in detail above the "now identified" Northrup Grumman unmanned aerial aircraft. 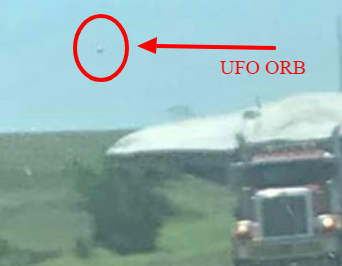 So while everyone is focused on the lookalike but obviously man made aircraft and it was said to be man made by Northrup Grumman, well it's the perfect and I mean perfect way to silently and still in plain sight transfer a UFO in daylight. Because everyone's eyes are on the unusual looking aircraft being transferred on a flatbed truck?

Remember, it was obvious to the truck driver that people will mistake it for a UFO. So it was obvious to the people in charge that it would be mistaken for a UFO. And we know that NOBODY at a Corporation would EVER give a public answer to a UFO question, so for me, there's ton's of red flags and guess what, I go back to look at the image and BOOM!

Now that is a metallic UFO Orb!

They was using smoke and mirrors, a card trick - misdirection to transport a UFO in daylight. But it was been flown. It's not on the flatbed truck. It's in the sky above it.

It's further away and higher up but it has the hybrid in it's sights keeping an eye on it. So again, I was correct? Or at least I believe I am right. It is very, very strange for sure. I mean nobody responds to any UFO questions do they. NASA won't even entertain a UFO inquiry. Northrop Grumman are keen to tell about a TOP SECRET AIRCRAFT oh and by the way it's just done the world's first autonomous air to air autonomous refueling I am shouting BS on that one i'm happy to say.

Misdirection so you all keep your eyes on the UFO (NOT) on the truck. 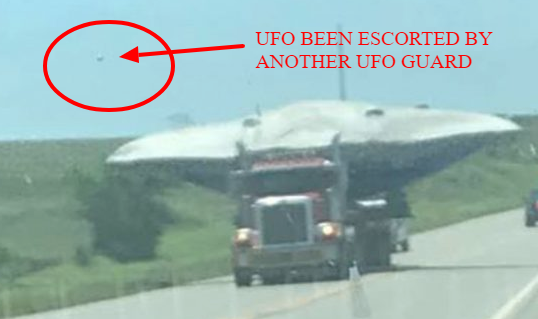