Please don't start thinking of ways of what is essentially "putting nuclear batteries in the hands of people" with very bad intentions! Just stop and think for a minuet? There's probably many, many applications for nuclear batteries and I get that but firstly, if nuclear batteries becomes as abundant as let's say erm "batteries" then i'm literally moving to an island! Elvis most definately would of left the building by then I can guarantee you that! Radioactive isotopes used in nuclear batteries have half-lives ranging from tens to hundreds of years, so their power output remains nearly constant for a very long time. But unfortunately the power density of betavoltaic cells is significantly lower than that of their galvanic counterparts. Despite this, betavoltaics were in fact used in the ’70s to power cardiac pacemakers, before being phased out by cheaper lithium-ion batteries, even though the latter have shorter lifetimes. I honestly don't know what to make of this, is it good or is it what seems like a bad idea? Please comment and let us know? 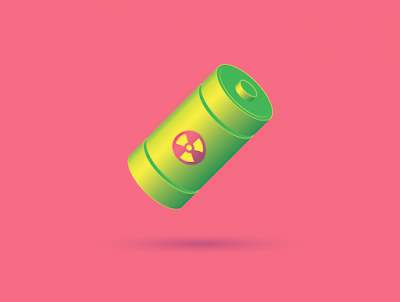 I'm sorry but I'm gonna go all "concerned citizen" on this stupid idea coming out of the Moscow Institue Of Physics And Technology (MIPT) because this is a "terrorist's wet dream" as sad as it is in todays world! Why not just hand out nuclear packs (oh yeah, that's what they are) to the wannabe doomsday bringers of anyone who doesn't believe in - or like what they do? Especially in todays world after all that's gone on in the world, it literally beggars belief that people want to go ahead and give what would essentially be a "bag of sweets" to a radicalised, misunderstood youth or hardcore fanatic?

Why is Russia on this path anyways? I know they have unused, leaking, decaying and in trouble "large amounts" of nuclear hazardous materials but c'mon really? There's better ways to getting rid of it or creative with it and dealing with the over stocks of nuclear rods, pellets etc whatever it is they have? What about for instance, I don't know putting it "in a reactor"? Here's one for you, put it in the bottom of a big, deep pool and let it cool off? You know just throwing it out there? 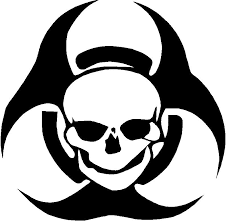 Please don't start thinking of ways of what is essentially "putting it in the hands of people" with very bad intentions! Just stop and think for a minuet? There's probably many, many applications for nuclear batteries but firstly, if nuclear fuel becomes as abundant as let's say erm "batteries" then i'm literally moving to an island! Elvis most definately would of left the building by then I can guarantee you that!

Russian researchers from the Moscow Institute of Physics and Technology (MIPT), the Technological Institute for Superhard and Novel Carbon Materials (TISNCM), and the National University of Science and Technology MISIS have optimized the design of a nuclear battery generating power from the beta decay of nickel-63, a radioactive isotope.


Their new battery prototype packs about 3,300 milliwatt-hours of energy per gram, which is more than in any other nuclear battery based on nickel-63, and 10 times more than the specific energy of commercial chemical cells. The paper was published in the journal Diamond and Related Materials.

Ordinary batteries powering clocks, flashlights, toys, and other compact autonomous electrical devices use the energy of so-called redox chemical reactions. In them, electrons are transferred from one electrode to another via an electrolyte. This gives rise to a potential difference between the electrodes. If the two battery terminals are then connected by a conductor, electrons start flowing to remove the potential difference, generating an electric current. 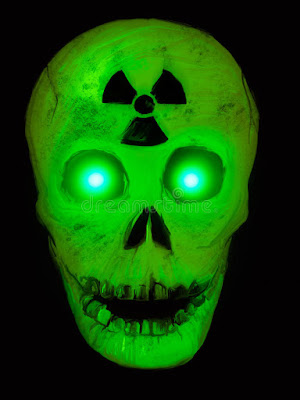 Chemical batteries, also known as galvanic cells, are characterized by a high power density that is, the ratio between the power of the generated current and the volume of the battery. However, chemical cells discharge in a relatively short time, limiting their applications in autonomous devices. Some of these batteries, called accumulators, are rechargeable, but even they need to be replaced for charging. This may be dangerous, as in the case of a cardiac pacemaker, or even impossible, if the battery is powering a spacecraft.

Fortunately, chemical reactions are just one of the possible sources of electric power. Back in 1913, Henry Moseley invented the first power generator based on radioactive decay. His nuclear battery consisted of a glass sphere silvered on the inside with a radium emitter mounted at the center on an isolated electrode. Electrons resulting from the beta decay of radium caused a potential difference between the silver film and the central electrode. However, the idle voltage of the device was way too high tens of kilovolts and the current was too low for practical applications.

In 1953, Paul Rappaport proposed the use of semiconducting materials to convert the energy of beta decay into electricity. Beta particles electrons and positrons emitted by a radioactive source ionize atoms of a semiconductor, creating uncompensated charge carriers. In the presence of a static field of a p-n structure, the charges flow in one direction, resulting in an electric current. Batteries powered by beta decay came to be known as betavoltaics.

The chief advantage of betavoltaic cells over galvanic cells is their longevity:

Radioactive isotopes used in nuclear batteries have half-lives ranging from tens to hundreds of years, so their power output remains nearly constant for a very long time. Unfortunately, the power density of betavoltaic cells is significantly lower than that of their galvanic counterparts. Despite this, betavoltaics were in fact used in the ’70s to power cardiac pacemakers, before being phased out by cheaper lithium-ion batteries, even though the latter have shorter lifetimes. Betavoltaic power sources should not be confused with radioisotope thermoelectric generators, or RTGs, which are also called nuclear batteries but operate on a different principle.

Thermoelectric cells convert the heat released by radioactive decay into electricity using thermocouples. The efficiency of RTGs is only several percent and depends on temperature. But owing to their longevity and relatively simple design, thermoelectric power sources are widely used to power spacecraft such as the New Horizons probe and Mars rover Curiosity. RTGs were previously used on unmanned remote facilities such as lighthouses and automatic weather stations.

However, this practice was abandoned, because used radioactive fuel was hard to recycle and leaked into the environment.

A research team led by Vladimir Blank, the director of TISNCM and chair of nanostructure physics and chemistry at MIPT, came up with a way of increasing the power density of a nuclear battery almost tenfold. The physicists developed and manufactured a betavoltaic battery using nickel-63 as the source of radiation and Schottky barrier-based diamond diodes for energy conversion.

The prototype battery achieved an output power of about 1 microwatt, while the power density per cubic centimeter was 10 microwatts, which is enough for a modern artificial pacemaker. Nickel-63 has a half-life of 100 years, so the battery packs about 3,300 milliwatt-hours of power per 1 gram — 10 times more than electrochemical cells. 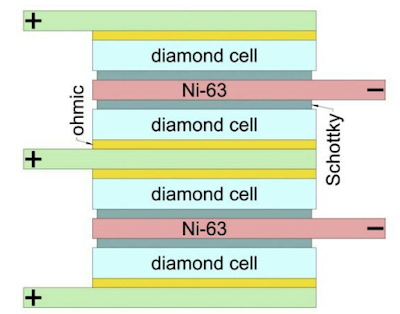 Figure 1. Nuclear battery design. Credit: V. Bormashov et al./Diamond and Related Materials
The nuclear battery prototype consisted of 200 diamond converters interlaid with nickel-63 and stable nickel foil layers (figure 1). The amount of power generated by the converter depends on the thickness of the nickel foil and the converter itself, because both affect how many beta particles are absorbed. Currently available prototypes of nuclear batteries are poorly optimized, since they have excessive volume. If the beta radiation source is too thick, the electrons it emits cannot escape it. This effect is known as self-absorption. However, as the source is made thinner, the number of atoms undergoing beta decay per unit time is proportionally reduced. Similar reasoning applies to the thickness of the converter. 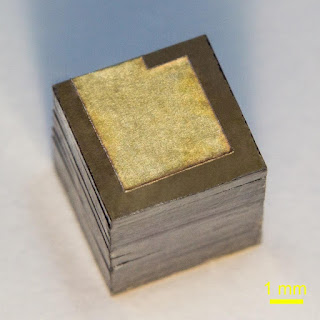 The goal of the researchers was to maximize the power density of their nickel-63 battery. To do this, they numerically simulated the passage of electrons through the beta source and the converters. It turned out that the nickel-63 source is at its most effective when it is 2 micrometers thick, and the optimal thickness of the converter based on Schottky barrier diamond diodes is around 10 micrometers.


Figure. 2. Below. (a) Dependence of power flux from the radioactive nickel foil on its thickness. (b) Efficiency of electron absorption in the diamond converter as a function of its thickness. The two graphs indicate that the optimal thicknesses of the nickel-63 foil and the diamond converter are close to 2 and 10 micrometers, respectively. Credit: V. Bormashov et al./Diamond and Related Materials.

The main technological challenge was the fabrication of a large number of diamond conversion cells with complex internal structure. Each converter was merely tens of micrometers thick, like a plastic bag in a supermarket. Conventional mechanical and ionic techniques of diamond thinning were not suitable for this task. The researchers from TISNCM and MIPT developed a unique technology for synthesizing thin diamond plates on a diamond substrate and splitting them off to mass-produce ultrathin converters.

The team used 20 thick boron-doped diamond crystal plates as the substrate. They were grown using the temperature gradient technique under high pressure. Ion implantation was used to create a 100-nanometer-thick defective, “damaged” layer in the substrate at the depth of about 700 nanometers. A boron-doped diamond film 15 micrometers thick was grown on top of this layer using chemical vapor deposition. The substrate then underwent high-temperature annealing to induce graphitization of the buried defective layer and recover the top diamond layer. Electrochemical etching was used to remove the damaged layer.

Following the separation of the defective layer by etching, the semi-finished converter was fitted with ohmic and Schottky contacts. As the above-mentioned operations were repeated, the loss of substrate thickness amounted to no more than 1 micrometer per cycle. A total of 200 converters were grown on 20 substrates. This new technology is important from an economic standpoint, because high-quality diamond substrates are very expensive and therefore mass-production of converters by substrate thinning is not feasible. All converters were connected in parallel in a stack as shown in figure 1.

The technology for rolling 2-micrometer-thick nickel foil was developed at the Research Institute and Scientific Industrial Association LUCH.

The battery was sealed with epoxy. The prototype battery is characterized by the current-voltage curve shown in figure 3a. The open-circuit voltage and the short-circuit current are 1.02 volts and 1.27 microamperes, respectively. The maximum output power of 0.93 microwatts is obtained at 0.92 volts. This power output corresponds to a specific power of about 3,300 milliwatt-hours per gramm, which is 10 times more than in commercial chemical cells or the previous nickel-63 nuclear battery designed at TISNCM.

Figure. 3. Above. (a) Dependence of current (black line) and battery output power (blue) on voltage. (b) Power density as a function of the resistance of the electrical load. Credit: V. Bormashov et al./Diamond and Related Materials

For the rest on this story follow this link. 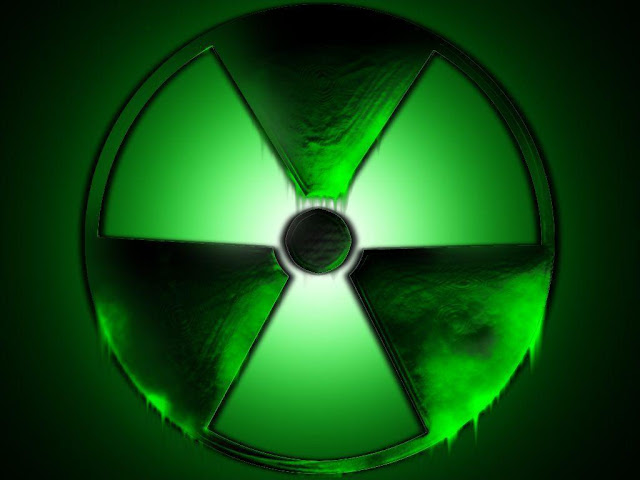 I honestly don't know what to make of this, is it good or is it what seems like a bad idea? Please comment and let us know?