New Dinosaur Species Keep Getting Discovered This Year - 3 Reasons Why

Dinosaurs is based on the stuff we've found so far! I think that we can all agree that this needs further studying and needs further investigation in to the Temple and the cave paintings and palaeontology plus the whole lineage of the Dinosaur timeline? Geologists need to definitely look in to this also because without their own research the timeline of Dinosaurs couldn't of been established or the theory put forward, maybe? It is baffling to me and so many people who have already seen this before me? I'm researching this because I find it fascinating and would like answers with facts, and not just opinions because it's hard to get to the said, facts with both put forward as solid proof?

We're living in a new "Golden Age" for paleontology.

Paleontologists might be in a new golden age of discovery. According to scientist Stephen Brusatte, he and his colleagues in the field are finding an average of 50 new species not just fossils or single bones, but entire species a year, which is nearly a new dinosaur species a week. Brusatte shared some of the reasons for this sudden boom in finding dinosaurs. 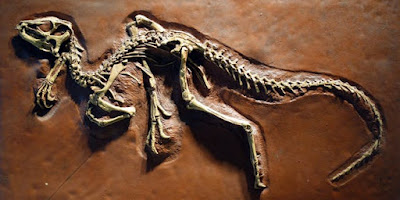 Guy's that's blooming unheard of! It's as if it's fixed or rigged?

Brusatte, a fellow at the University of Edinburgh, sat down for a Q&A with National Geographic to discuss his new book The Rise and Fall of the Dinosaurs: A New History of a Lost World and how it creates a new narrative surround the Tyrannosaurus Rex and its demise. In addition to changing scientists’ understanding of the T. Rex, Brusatte has also discovered 10 new types of dinosaur species, something that paleontologists of the past could only dream of doing in an entire lifetime. New technology, as well as multiple government policies, are just some of the latest developments that give paleontologists access to new data and dig sites, catalysing what Brusatte calls a new “golden age” for the industry.

My views are my own personal views, but I think I have a vilid point(s)?
Right, here's my 2 pence worth of information/opinions. I believe that in 2012 something really, really big happened in Geneva Switzerland. I believe that when CERN or the LHC recreated the big bang, I believe opening one reality inside of another reality is a Pandora's box, a contradiction, a BIG NO NO! Something had to give, so to prove another dimension existed they had to CREATE ONE or INVENT A NEW DIMENSION? When they recreated the big bang they literally threw us in to this other fake dimension where we know the atom changed, hence it's a totally different reality because our basic atoms says so! We explicitly changed the ATOM.


The last dimension our atom looked very different. That's how one measures dimensions is by the basic atomic structure. Now all these Dinosaurs are been found because this dimension is MAN MADE! The entire DNA sequence was recreated in 2013 from scratch. That's the scientists way of saying they just CREATED ARTIFICIAL LIFE WITH A SOUL, A CONSCIENCE! This AI robot in Saudi Arabia that just got a citizenship passport, well that's the beginning of the transitioning to all code. This entire dimension is mapped in every direction.

It feels like it was only done in 2012 but we've actually done this millions of times since the dimension was created in 2012. Forever is forever, time doesn't exist in this dimension, it could barely be explained in the last one let alone this fake reality.

Two things can't exist in the same space at the same. Therefor the two things are existing in two time zones at the same time, therefor time as one place doesn't exist THEREFOR TIME DOESN'T EXIST! We are somewhere in between on a plane(t) of existence! Dinosaurs came and went, their bones are popping up because we know where they are in this fake, man made dimension. We sent the signals back through light, not time! Big misconception that ios sorry I mean is!

A huge win for paleontology has been the ability to dig in countries like China, Mongolia, Argentina, and other countries that had closed their borders to palaeontological digs in the past. Since granting access to its mountainous regions and the Gobi desert, China has become a hot spot for discoveries.

“Probably about half the new dinosaur species are coming from there,” Brusatte explained. One such discovery was the raptor dinosaur Jianianhualong, which has led many paleontologists to argue that feathers and wings didn’t first evolve for flight. The slender, bird-like Jianianhualong suggests feathers evolved to keep dinosaurs warm before becoming an aid for flying.

In a paper published last month in the journal Nature, researchers were able to identify the bird that bridged the gap between bird and dinosaur through the use of CT scans. The Ichthyornis dispar lived 100 million years ago, but by piecing together CT scans of new fossils alongside several different specimens from existing museum collections, the scientists ended up with a fairly complete look at the toothed bird.

CT scanning has been in the news a lot for being the source of new palaeontological discoveries. Whereas CT scans have been available in health industries since the 1970s, its growing popularity in paleontology and increased capabilities have allowed scientists to look at the brain, sense organs, sinuses, blood vessels, and nerves of a dinosaur just by scanning its skull. Brusatte used CT scanning of T. Rex skulls to draw the conclusion that the size of the Tyrannosaurus brain relative to its body was comparable to the range of chimps, meaning it was probably a “much smarter animal than people give it credit for.”

3. Diversity of scientists is helping to diversify discoveries:

Part of the reason why countries like China opened its borders to more scientific digs was thanks to the growing population of paleontologists from within the country. Whereas the industry was once predominantly men from Western countries, “now you have this huge group of young people in China, Argentina, and other places, studying dinosaurs,” Brusatte said. “And they’re making a lot of new discoveries.” Not only have scientists from China and other countries been able to open the door to new digging sites and advancements, but women have increasingly contributed to this year’s most important discoveries. “It used to be an old men’s club…”

Brusatte recalled, “but over the last few decades that’s started to change. My lab here in Edinburgh, for instance, is very female dominated. Of my eight Ph.D. students, seven are female.” Women such as Beijing-based Jingmai O’Connor, Ph.D., are mentioned in his book as being at the forefront of understanding the link between birds and dinosaurs. O’Connor is considered the world’s expert on the earliest birds found in China. Thanks to these technological advancements and the diversity of both scientists and locations for research, paleontology has become a globally growing industry, and the results for science are staggering.


DINOSAURS AND HUMANS DEFINITELY COEXISTED TOGETHER!

Let's face it, palaeontology and the understanding of Dinosaurs is based on the stuff we've found so far! There could be stuff waiting to be found that will turn it on it's head by either been from an earlier period or a later period? I say, hold off with the facts until we get a full picture unless we might just keep running in to contradicting finds time and time again? The depiction of a Dinosaur, carved in to a Cambodian Temple called Ta Prohm found in the jungle is quite thrilling because this has got to rewrite history?

I think that we can all agree that this needs further studying and needs further investigation in to the Temple and the cave paintings and palaeontology plus the whole lineage of the Dinosaur timeline? Geologists need to definitely look in to this also because without their own research the timeline of Dinosaurs couldn't of been established or the theory put forward, maybe? It is baffling to me and so many people who have already seen this before me? I'm researching this because I find it fascinating and would like answers with facts, and not just opinions because it's hard to get to the said, facts with both put forward as solid proof? 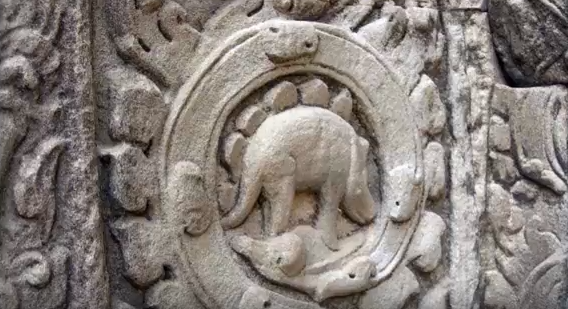 It seems like everyone has an interest in this but for the reasons of fascination and wanting to understand this very, complex issue of the Dinosaur timeline and that's really good? Did humans and Dinosaurs coexist i.e specifically the Stegosaurus and humans or the depicted Dinosaurs in the numerous ancient cave paintings, and the pictures even from way before 1842 when Richard Owen coined the phrase Dinosaurs? I think it's a matter of more research (open research) and more time to figure this very complex and fascinating conundrum?

But what we can't forget is the "carved in stone Dinosaur" of the Stegosaurus? We shouldn't put all our egg's in one basket i.e carbon dating of the layers of sediment and layers of rock's and the stuff around the Dinosaur bones? Or we need more Dinosaur bones to which with more bones we might start to find later and earlier bones that might give us a clue and a fact that they actually did live side by side? Because let's face it, the whole Dinosaur and Palaeontology is based on only the stuff they've found up to now? as to why (maybe) humans and Dinosaurs did coexist?