The Solar System Has At Least 8 Giant, Secret Oceans Where Alien Life May Exist

This post explores the possibility of life in space on other planets.

Now this is more like it, right? This is what i'm talking about! "Secret Oceans" now that's straight from the horses mouth, NASA! Scientists recently found even more evidence that Jupiter's icy moon Europa is hiding an enormous ocean of saltwater.

To say Europa's ocean is vast would be an understatement. If all of Earth's water oceans, lakes, rivers, rain, clouds, and more were combined into one blob, it'd be just half as large as Europa's liquid reservoir. (And Europa is about the size of Earth's moon.) 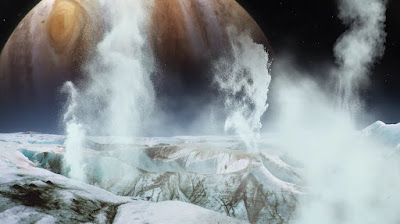 An illustration of salty ocean water spraying from the icy crust of Jupiter's moon Europa. NASA.

"Would it use DNA or RNA? Would it use the same chemistry to store and use energy? Discovering extraterrestrial life would revolutionize our understanding of biology."

But Europa is just one of many ocean worlds in the solar system, including Enceladus, Pluto, Titan, and Ganymede. To figure out how much liquid water and ice these worlds have compared to Earth, Business Insider contacted Steve Vance, a planetary scientist at NASA's Jet Propulsion Laboratory. Vance closely monitors research about ocean worlds to create estimates of ice thickness, ocean depth, and other parameters.

The graphics below use Vance's data and other sources to show the probable volume of liquid water on eight known ocean worlds besides Earth. Volumes are shown in zettaliters (ZL), a unit that's equal to 1,000,000,000,000,000,000,000 liters or 1 billion cubic kilometers. Earth harbors about 1.335 ZL of water, according to the National Oceanic and Atmospheric Administration.

Enceladus is a relatively small moon of Saturn, at just 314 miles in diameter — about as wide as the state of Arizona. But its ocean sprays water into space. NASA's Cassini spacecraft confirmed the ocean's existence after its arrival in 2004, later detecting and flying through the water plumes to "taste" them. Note: Because Earth has a very small amount of ice relative to other ocean worlds, this graphic and the following ones only depict our planet's liquid water.

Triton is a moon of Neptune that's some 2.8 billion miles from Earth. Voyager 2 is the only spacecraft ever to fly by, measure, and photograph Triton. Those sequential photos showed that Triton has "cryovolcanoes" that spew out water and ammonia.

Dione is a small, icy moon of Saturn. Scientists determined in 2016 that — like Enceladus — Dione likely has a subsurface ocean.

Pluto is the famous planet of yesteryear that astronomers agreed to demote to a dwarf planet. NASA's New Horizons spacecraft recently helped determine that Pluto has a liquid ocean packed with ammonia a substance that's toxic to humans, but could feed alien microbes. 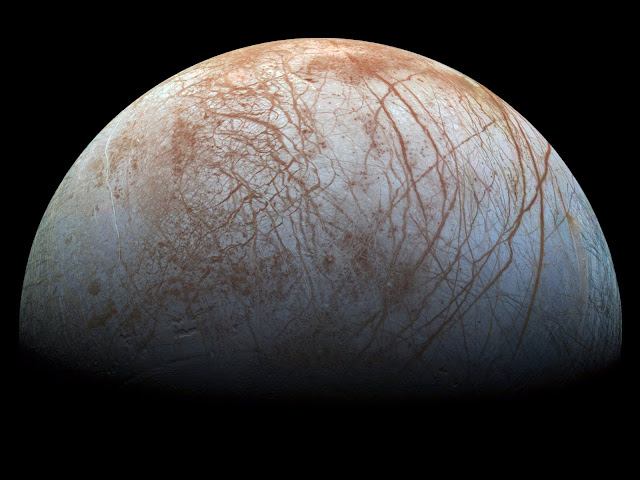 Europa is the smallest of four Galilean moons of Jupiter (so named because they're the largest and were first discovered by Galileo Galilei in 1610). Europa is about the size of Earth's moon and likely has a huge, salty ocean. Volcanoes on Io, the second-largest Galilean moon, likely burp out sulfur-rich nutrients that then enter Europa's ocean. Recent studies also suggest that Europa is shooting out jets of this ocean water into space — where a future spacecraft could sample them for signs of life.

Callisto, the second-largest Galilean moon, is covered in ice, and almost certainly has a vast ocean. However, its crust is about 125 miles thick — which makes it very difficult for scientists to discover what's going on down there.

Titan is the largest moon of Saturn and the second-largest moon in the solar system. Scientists often refer to it as a "proto-Earth" due to its composition and size. A similarly colossal ocean of liquid water may exist below its roughly 60-mile-thick crust of ice.

Ganymede is the largest of Jupiter's Galilean moons, and the biggest moon in the solar system. Its stores of water may outnumber Earth's by a ratio of 18 to one.

How all the ocean worlds stack up

In order of how much water each world has, from the least to the most, the wettest are: Enceladus, Dione, Earth, Europa, Pluto, Triton, Callisto, Titan, and Ganymede. Mimas, a moon of Saturn, and Ceres, the largest asteroid in the solar system, might also have subsurface oceans. But scientists aren't yet sure how big each one might be, if they exist at all. 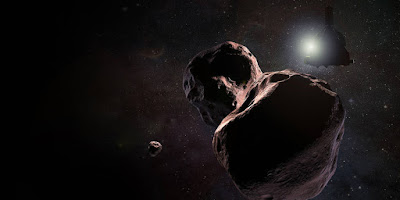 Artist’s impression of NASA’s New Horizons spacecraft encountering 2014 MU69, a Kuiper Belt object that orbits one billion miles (1.6 billion kilometers) beyond Pluto, on Jan. 1, 2019. With public input, the team has selected the nickname “Ultima Thule” for the object, which will be the most primitive and most distant world ever explored by spacecraft.