Many UFOs Above, Around, Side Of - Pretty Much All Over A Volcano...

Volcanoes have been a favorite site for alien hunters over the years. Now a strange series of lights above the Popocatepetl volcano in Mexico have got conspiracy theorists excited once again.

Yeah there's got to be something wrong with the camera right? Well actually the cameras just fine, unlike the actual volcano because that's busy erupting away in the background while we're sat watching these otherworldly arrivals going about "what look's like" their merry way? Strange as it is, these are all different UFOs and not just a single one making itself known?

The footage of the UFOs are all over the internet and if you haven't seen these as yet then I understand how these must look for the first time and that's "awesome"! I found this post on dailymail.co.uk and I immediately thought about you guys and how much you'd wanna watch this:

What are these strange lights floating above a Mexican volcano? UFO hunters say they could be aliens monitoring the Earth 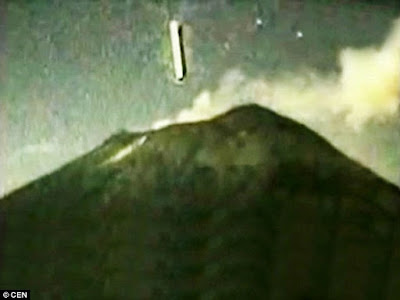 Volcanoes have been a favorite site for alien hunters over the years. Now a strange series of lights above the Popocatepetl volcano in Mexico have got conspiracy theorists excited once again.
The sightings, they say, suggest aliens are studying Earth's geothermal activity so that they can understand how it works.

The lights appeared at the same time as the 18,000ft volcano released four explosions which released gas vapor.

Webcams Mexico recently uploaded the video which has become popular on social media and UFO forums. Skeptics claim the bright lights are probably volcanic material being ejected from the volcano or an atmospheric phenomenon. In a more radical theory, some scientists say the material from which these UFOs are formed could trigger hallucinations, which may explain the bizarre first hand accounts of alien sightings.