Uranus Just Got Even Stranger

Uranus is a place where you would not want to spend to much time as it really smells of well, Uranus literally! Apart or aside from the noxious gasses, Uranus has become one of the most uncanny and coincidental places in the universe? The namesake is just bizarre because of the actual make up of the planet?

Guy's Uranus was destined to be called what it is because one of the key components of the planet's clouds has finally been verified and it relates so much to it's name sake that it's uncanny? A global research team that includes Glenn Orton of NASA's Jet Propulsion Laboratory in Pasadena, California, has spectroscopically dissected the infrared light from Uranus captured by the 26.25-foot (8-meter) Gemini North telescope on Hawaii's Mauna Kea.

They found hydrogen sulfide, the odoriferous gas that most people avoid because of how it is "normally" produced, in Uranus' cloud tops. The long-sought after evidence was finally published in the April 23rd issue of the journal Nature Astronomy. 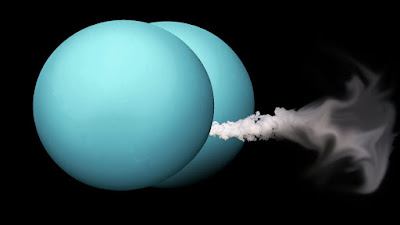 Guy's this is a bone fide real scientific study to discover what makes up the gasses in the clouds of Uranus? So whatever or whichever way you want to look at this, it will ALWAYS bring out the giggles and laughter in many people because that's just human nature and there's nothing wrong with having a giggle every now and again and while we're at it, it can show people that some things are very, very uncanny? Calling this Uranus and the very first gas detected on Uranus is hydrogen sulfide or as it's normally called, phew. That's what makes this a really good story.

According to Wikipedia.
Uranus is the seventh planet from the Sun. It has the third-largest planetary radius and fourth-largest planetary mass in the Solar System. Uranus is similar in composition to Neptune, and both have different bulk chemical composition from that of the larger gas giants Jupiter and Saturn.