Secret Underground Base Has People Using A Fitness App Tracker

So, here's a post about a fitness app that tracks your usage and fitness levels, running, walking, jogging etc and also (and crucially) where you've been - so you can download the data and gather the daily statistics and add them or join them up against the rest of the weekly or monthly data that you've painfully exercised for and so now you've got a visible data plan in front of you. Sounds so simple even I can grasp it.

The image below is of the suspicious and supposedly Alien base in Antarctica? Who would be jogging here in a very structure like and building like place? The lines are so straight, so uniform that has to be a building! On Google Earth there's nothing there? It has to be underground, right? It must be and therein is the conspiracy theory. 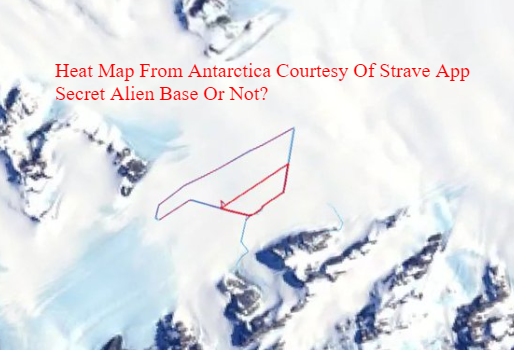 Strava app image of Antarctica with a heat map overlay.

Here is the saddest thing:

The U.S. Military and Navy actually gave their personnel these devices and encouraged their use! 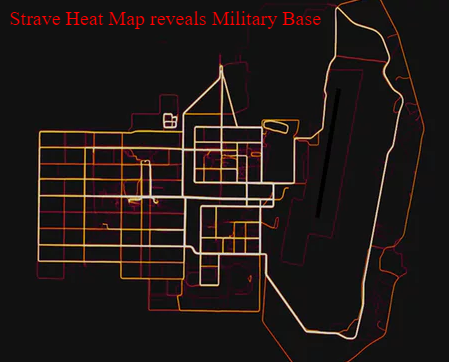 A military base in Helmand Province, Afghanistan with route taken by joggers highlighted by Strava. Photograph: Strava Heatmap

There all leaving a heat signature and combined with their location pings, well you've just got a massive national security flaw on your hands. Don't worry we're not the first to report on this and research on this. It's been out for a few months now. So, we are not helping anyone get the better of anyone else. This is public knowledge and yeah, I'm highlighting this because it's given Ufology theorists a really, really good bit of knowledge, insight or whatever you wanna call this?

Above in the image is a heat map image from the actual Strava App itself showing the outline of a military base in Afghanistan. Which leads me on to the next part which is the Antarctica outline of what look's like nothing until you turn on the heat map and pings of the people wearing their fitness bands who have now been jogging and bam there's a clear underground secret base and some think they are secret Alien facilities and bases...

The biggest and worst contributor (besides wearing a tracking device in general or at all) to this awful blunder is that the data sharing is enabled by default and must be opted-out of? Here's what Strava had to say for itself in July of 2017.

“You can opt-out of yourself contributing your anonymous public activity data to Strava Metro and the Heat-map by un-checking the box on the app.” Officials of Strava Blog, July 2017

Now that's a very flat note or a matter of fact way they put it. It's a kind of we don't care attitude because we are legally covered, oh yeah did we say, "deal with it". So if your legally covered then that means it's OK? Well, that might be true but the attitude is wrong. The obligations to their service users is paramount and any and all consequences OK legally don't fit, but morally and the code of conduct surely has to have some sort of say right? Apparently not so. Soldiers lives are at stake? National secrets are at the mercy of this heat map.

I don't think it was intentional on Strava's behalf but if they have a safeguarding assurance of your data and this is proof that there's a flaw in that assurance then I hope they have addressed this issue?

Right, in Antarctica these fitness bracelets, bands have been pinging their users locations and boom! You've just exposed a multi billion dollar secret Alien test facility, underground and hidden structures in the middle of nowhere! That's how easy that was, and it was all given to the soldiers by their government.

That's very bad for them but priceless for conspiracy theorists and people who have said that X, Y and Z is in such and such location. Well some of these guy's stories have just been validated and some have had their claims accepted. I wasn't the first person to point this out, it was a whistleblower at somewhere who got in touch with a famous conspiracy theorist and Ufologist and has been trickled down to us, lol. That's how it works.


I won't be posting on YouTube ever again. I've had a really bad experiance as I was targetted by a bigger channel and they've put 8 copyright strikes in against my channel on the hour every hour yesterday so it's absolutely the straw that broke the camels back. 6 months ago I was targetted by an extortionist in Taiwan who wanted money unless they were going to put in false copyright claims. I never paid so I had 3 strikes and I couldn't post for 2 months. That shook me. but this has absolutely and sincerely made me lose faith in YouTube as thsi guy is a massive channel. It is not fair but I get it.

If you can remember that YouTube used to have a creative commons archive? It's where people could use their videos and reuse them and remix them and create new videos with them? well some people used to deliberately download peoples videos from YouTube and upload them to the YouTube archive and knowing people would fall in to the trap thinking the original person has allowed their video to be used in the creative commons way i.s remix and reuse?

So, again I have never had anyone wait every hour, on the hour and repeatedly out copyright claims in on 8 videos! I was asking for them to talk to me, but nothing? It's OK though. I get it. I was not prepared for someone to act in such a horrible, disgusting and vulgar way. I had only 25 thousand subscribers and this channel has 317,000 subscribers. So it shows, no matter what on YouTube all walks of life are on there.

I WANT NO PART OF YOUTUBE AS IT'S FULL NASTY UFOLOGY PEOPLE. VERY NASTY, DISGUSTING PEOPLE. THE THING IS I NAIVELY THOUGHT WE WAS ONE BIG UFOLOGY FAMILY? WOW, WHAT A WAKE UP CALL.

I built up the USF YouTube channel over 2 years all for what? For a vindictive person to knock it down in half a day. I'm sorry but I want no part of it. I feel sorry for him. I really have forgiven him. That was the hardest part, was me forgiving him. He feel's he's protecting his stuff and I get that. But the thing is, the way he did it was so, so, terrible and there was no need. I'd never act like that. I wouldn't act like that to anyone and I shall never act like that.

Guy's please don't subscribe to my UFO Sightings Footage YouTube channel as I'm coming off there. It's going. This website is still going but I've decided to end the USF YouTube channel. I am sorry for letting you guys down and it hurts. I know from you guys that you genuinely liked my videos as I always got messages of thank you and encouragement from you awesome people - but guys, after been 6  months ago when I was been bribed, black mailed and extorted and then to this - been targeted by a bigger channel! It's to much for anyone to take. Thank you for all your support and your valued UFO reports, encouragement and friendships.

I don't care if my counterclaims on the Youtube videos are approved as I've simply had enough. Cheers guys and I'm still posting on here. I just won't be using YouTube or another video hosting sites. I'll directly upload videos of me talking. I don't want to give anyone anymore stuff to put dampeners on my Ufology research. It means a lot to me big time.