Another Flying Saucer Discovered on Mars

There's many times that the Mars Curiosity Rover has come up trumps and this time it has uncovered a Flying Saucer. The Mars Rover has given us some fantastic views even breathtaking but for some they only want one thing, that's UFOs! 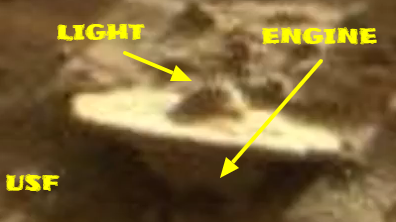 That's real conspiracies and tangible even in your face "undeniable evidence" and guy's, that's what we have here. We have a obvious looking UFO or to be more precise, it's a Flying Saucer of the ancient kind.

It looks .like it's millions of years old. It look's like kit was once embedded in the ground, embedded in the side of the hill and has come lose. It's not surprising that Mars experiences weird and even strange weather so land erosion is always going to happen. It's sandy, it has rocks of every description littering the surface of the Red Planet.

But this, this is a strange "Mars anomaly". There has been many, many anomalies discovered on Mars and there's been many denials by NASA over the years who say that all of the anomalies are explainable one way or another by natural means which is absolutely laughable. OK, explain this: 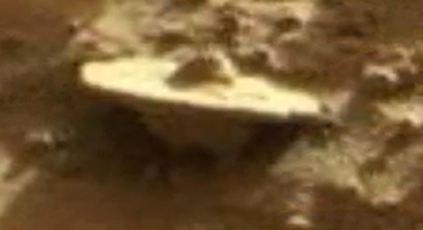 So if that's not a petrified Flying Saucer then I'll eat my socks. If that's not intelligently made and of ancient origins I'll eat my underpants. I won't however eat a lemon as they're way to sour.

An online website has posted videos about this and they did a great job, this is a NASA image. It's a NASA Mars Curiosity Rover image and it's absolutely 100% proof of Aliens. Even if the Aliens don't exist now, they definitely existed at one stage because there's just to much evidence to say that they did as opposed to say that they didn't?

You see, there's just one of many examples of really strange anomalies on Mars and all of them was caught by NASA. So when you hear NASA whining on about the search for Aliens will continue, I automatically think "check your stuff" you've already got the evidence and you've already got the answers? but still they march on getting sand examples and looking for microbes or some tiny, tiny bacteria blah. It's there, it's behind you like in the pantomime? It is staring at them in the face almost.

The images that the Mars Rover has given the world over the years has been extraordinary and as a conspiracy theorist, they've given me a massive amount of belief and spiritual belief that we're not alone in the universe. I don't need NASA's seal of approval that these are real, because and get this, I have eyes! In this day and age that's all you need to get the answers your looking for.
An alleged skull found on the surface of Mars by UFO hunter Scott C Waring who has spent the last seven years reporting alleged UFO sightings on his website ufosightingsdaily.com 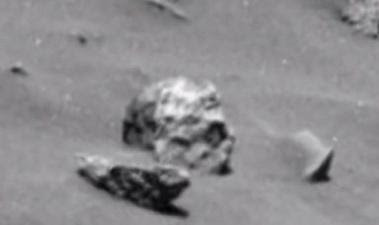