Another amazing video of a few UFO's on a secret mission (it's definitely secret) and it's was filmed because they were listening to loud music! Seriously turn it the f down lol.

There's always a few UFO's out there on missions or should I say up to no good being all sneaky like. I don't like it when one UFO is seen let alone a group of UFO's stalking the Earth doing God knows what?

Seriously if God made us, who made Aliens and that's a valid point because I fully believe that were not alone so to me, that's a valid and "sane" question?

Here's a few screenshots I grabbed for you to have a good old scrutiny over. I have tried to filter them, saturate them and extract anything but I believe they're just to far away from the video lens.

Getting any discernible or recognisable bits to stand out is fruitless, well it is with my software anyways? If you can grab anything from these I would love to see it? 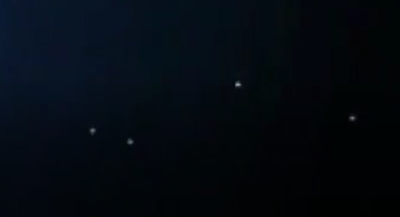