Described As The Most Clear And Shocking UFO Video EVER

This is the best UFO and it's described as one of the greatest modern Flying Saucers ever seen. This is a UFO which was reported to MUFON and investigated by a MUFON investigator, but there's doubts which have been poured on to this otherwise amazing and even spectacular Flying Saucer in Africa. You need to see and read the post as there's the video of it and we've got MUFON comments. The Mutual UFO Network (MUFON) has been sent a 19-second long clip said to have been filmed in Nairobi, Kenya, African, this month.


One of the biggest complaints about alleged UFO footage is that the clips are often blurred, out of focus, or filmed from too far away. 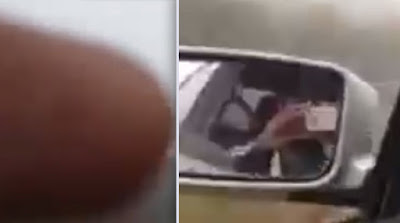 But in the video sent in to MUFON, there is bio mistaking the flying saucer that roars over the remote road. The footage, which has been branded a CGI hoax by many viewers, begins with someone seen filming in one of the the rear view mirrors of the vehicle. It is overcast and raining, and the quality of the recording itself is quite poor.

Then a finger is seen to point out of the window and towards the top-right of the screen. Judging by what is implied is about to pass over head, the cameraman remains very calm and silent. At 11 seconds in an aeroplane-like noise is heard before a huge classic movie-style flying saucer flies over the road as if descending to land.

It goes out of view again beyond trees and undergrowth at 13 seconds, before the noise changes to an echoing boom before stopping. If it were not a fake, it would be the most sensational UFO video captured to date. The video is below I suggest you should watch it in full screen.

MUFON case number 77230
But I don't know why it was actually submitted to MUFON twice and a month a part? Why do you think this happened? Is it because there was two eye witnesses?

Here's what the eye witness said:

It's a foggy morning in Kenya, Muranga County, me and a friend are driving down a Murram road video tapping the heavy fog that is falling making it hard to drive.


Its terrible weather for us but not for this UFO that took the chance to fly by unnoticed. There's still loads of information left on Express Online. Researching this UFO encounter is a great idea because it is a very fine line between good hoaxes and the real deal and I don't know if we'll ever determine if this is real or not.