Green Mist Sprayed From UFO Over California Years Ago 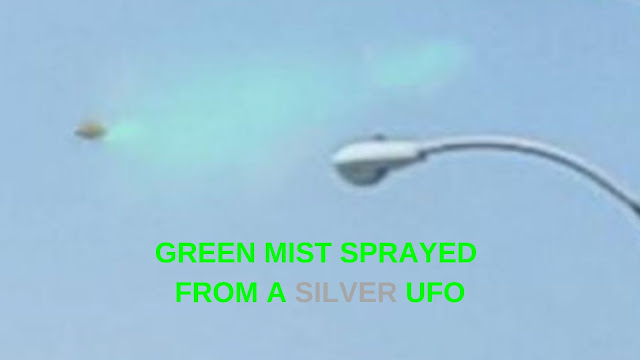 A few years ago now there was an unusual MUFON case of a silver UFO which was a domed or Flying Saucer type UFO in appearance with a bulb like body, silver in color and was witnessed spraying a green mist from the rear end of the craft over a neighborhood in California. 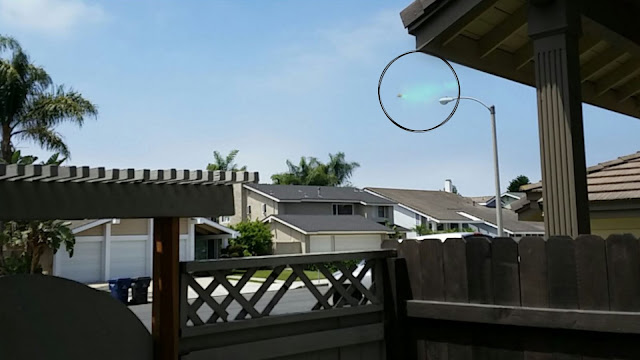 It was I believe 2013 that it was actually witnessed but only in 2016 when it was reported to MUFON (case number 81084). It's interesting because this could be any number of things in that mist from a government chemical agent to a damaged UFO spraying it's fuel from a part of the craft that's damaged.


It could even be a "pretend UFO" supposed to look like one so any number of people, agencies, authorities or corporations can get in to a specific area and spray this unknown mist containing unknown chemicals directly on to a group of people? You start to think a little bit outside the box or of possible suspects that could want to use this and that's when you realise just how dangerous this could be?

The photographs and sighting itself are being investigated by the Mutual UFO Network (MUFON) after it received a report from an eyewitness in Huntington Beach, California, USA. The eyewitness, who has not been named, said:


"I looked up to see what I first thought was a passenger plane on fire. "Within a second or two, I was startled because I had realised this was no plane. "It was a dull silver-domed object with orange lights around its middle. "It was a typical domed UFO looking craft. "It was obvious to me that this craft was in trouble."

The witness said "there was no flame or intense burning, but some sort of vapour trail being left".

Is this a daring attempt at spraying the population with radiation, nerve gas or a "virus"? It could even be a sleep agent which enables an Alien abduction later on that night and this is the "very first" time that this part of the Alien's process of abducting humans has been witnessed and photographed? I mean, nobody has ever observed an Alien abduction from start to finish documenting it as it unfolds, have they?

New information is always coming to light and it's up to us to always make sense of it and keep on guessing what it could be or mean because if we don't then we'll never figure it out. Even when we think we've figured it out, we still need to keep our minds open especially when there's a new Alien abduction reported. 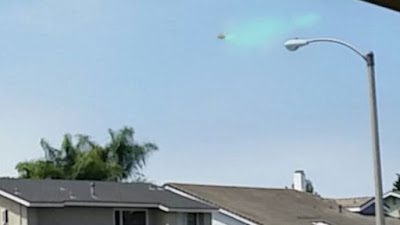 Yeah, I agree it's laughable but it's not for the people who absolutely know they've been abducted by Aliens so please, if you can - imagine for one second what it must be like for an abduction victim? If you can't imagine it then you are not qualified to pass judgement or comment, that's just a matter of fact.

Empathy, sympathy, compassion. These are all needed when passing or making a judgement whether Alien abductions happened. It's just a matter of time before "anyone" will make a decision or form an opinion on such cases, it cannot be helped. It's human nature and some can hold out longer than others until more facts are given but generally speaking you've already made a decision.


I put this image through a filter just to bring out the green mist, low and behold you can definitely see it a lot better now. The tint was -59, saturation at 100 and contrast at 64 I turned up the X process on Canva to 100. This is absolutely emitting green mist or liquid. 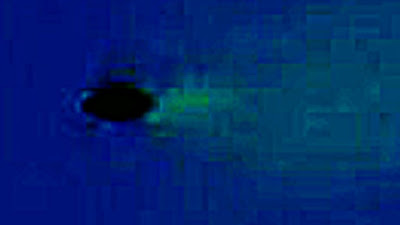 Did this happen, yes it did. But was it staged or not I honestly don't know? I mean, who knows what the bigger story here actually is? Will we ever get to know what or who or why this was even in the air over Huntington Beach, California at all. Well I will leave that up to you guys to judge for yourselves and look in to further if you wish.

Detailed Description:
(This is a long, detailed description so we've only highlighted the description. You'll have to check out the link here for the rest. It is wrote here exactly how it is).

It was my birthday at my house. i was taking out the kitchen trash. it was approximately 11am, july 20th 2013. i walked out of the exterior garage mandoor on the w side of my house. i immediately heard a low rumble mixed with a hissing like noise above me to the west. i looked up to see what i first thought was a passenger plane on fire. there are many airports nearby and it was not unusual to see planes in the airspace this object was in. within a second or two, i was startled because i had realized this was no plane. it was a dull silver domed object with orange lights around its middle. i thought i could see a small spire like portrusion out of the top of the object. it was a typical domed ufo looking craft. in fact, that was one of my first conscious thoughts... wow.