5 Green UFOs Over Spicewood 2 Whizzing Off At Speed

The US has had a recent UFO sighting's that's simply out of this world (no pun intended). It's a 5 UFO team with two UFOs speeding off towards right.

This is what I'm talking about, it's why I write about UFOs, it's the type of UFO sightings that I scan for first in the in tray!

We've all got our favourite UFO sighting types (we I certainly have) it's like eating the bacon first and leaving the beans or having a coffee first thing in a morning.

Below we see the 2 UFOs flying away from the UFO formation pack. 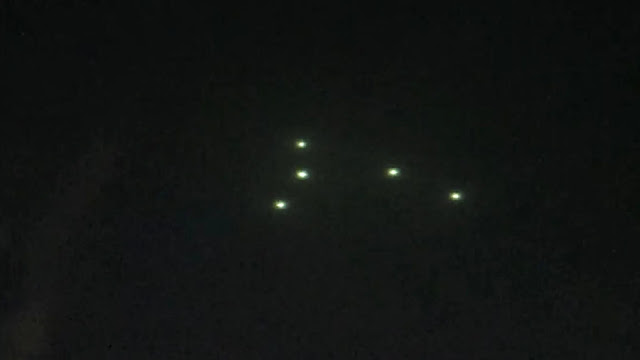 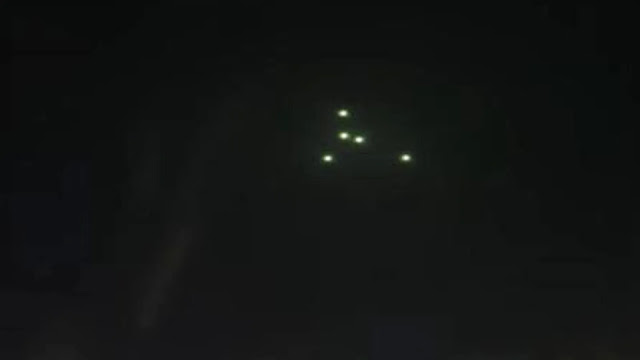 Green UFO Orbs over Spicewood, Texas US on 1st September, 2022.

It's something that I actively seek out first thing in the morning because it's the best kind. If I could wake up every morning to a UFO sighting similar to or better than this I'd be a very happy man. These types of UFOs speak for themselves, multiple eye witnesses, the UFOs are flying off from a standing still position and in a formation pattern with a balmy acceleration that would otherwise do harm to a human being.

If a human was inside of the UFO when it took flight from it's formation position then someone would need to be on standby with a hose pipe at the other end. No human beings could withstand this type of craft's acceleration which tells me that we're possibly looking at the types of exotic off world technology that the US Government has already confirmed to us.

Not built by the US Government or it's technology subsidiaries, it's not another countries advanced aerial technology capable vehicles and it's definitely not a secret program.

It doesn't leave much scope for responsibility does it. So by crossing off the list the usual suspects ie the normal maker's of advanced technology aircraft's, it's pointing one huge finger off world.

It's not so much as reading between the lines, it's more about voicing what's left on the table of possible suspects...

Although some might argue that Extraterrestrials haven't been identified so how can they be left on the table of suspects, I'll gladly point these people to the whole reason a massive genre even exists and what pray tell is it that the US Government is pointing to when it crosses off the list every known makers of advanced aerial vehicles? Who else is left on the table?

Spicewood in the usa is in Texas with the post code been 78669 is where this green UFO Orbs sighting took place on the 1st Septembe, 2022. The witnesses reactions are literally priceless, I hear a certain amount of fesr, trepidation, scared and excitement in their shrieks and fast talking.

"Did you see that" is the benchmark call for pretty much every genuine UFO sighting.

In fact if I was to write a book I'd call it what it is, and that would be "Did you see that."

KXAN news outlet ran this story in the US and have you noticed that the larger news outlets in the USA have literally thrown away the old handbook of "ridicule, poke fun, snub and deny" and replaced it with front covers, leading stories and actually asking questions in the White House! For want of a better word it's insane! Seriously and I'll be honest with you guys I never thought I'd see it.

I never thought that it'd be the center stage with most congressman and congresswoman all United asking questions, no scratch that "demanding that the Feds, Pentagon, CIA etc" all turn over what they know! I never thought I'd hear NASA say they've set up an independent study committee to investigate the science behind the Unidentified Aerial Phenomena but yet here we are.

In the last 5 year's it's gone from that low usual hum of UFOs over this place and seen over that place to full disclosure and subsequent declassified videos of unprecedented UFO activity. President's have got involved, Congress I've got to take my hat off to has probably been at the center of a lot of the material which has been declassified.

Not forgetting the US Navy, the DoD and yes the list goes on especially when talking about how it got to this stage. Practically everyone involved in bringing UFOs out of the shadows and into the light can some way or another be attributed to having some effect on this.

The countless UFO Investigators, the countless tens of thousands of hours spent by UFO researchers and independent sources, the whistleblowers, the people who have sacrificed their careers at a time when UFO sightings was still met with ridicule.

I could continue and probably tell you how the guy who just so happened to have a spare phone on a flight and ended up filming a UFO which cost him his job because he insisted on filing a report. But how it was instrumental in bringing UFO disclosure as it was a UFO sighting hand picked and presented as evidence of Extraterrestrial craft's operating in our atmosphere.

Do you know how many clandestine meetings have taken place regarding how to proceed if sightings come out or how to respond to the ISS live feed cameras catching UFO activity?

So each and probably every agency in the US Government and countless other Government's around the world must have had these same secret meetings on how to react, how to proceed otherwise we would not be where we are today because you best believe that the implications of UFOs aren't taken lightly. Where talking about the possibility of an unknown threat. An unknown threat but with a definite foothold on Earth because hundreds of military pilot's are filming them, Navy aircraft carriers are filming them being buzzed by UFOs! It's as serious as it can ever get.

Look, I can sit here where I am right now and write about the subject that I love going from story to knowledge and information to facts, from fact's to eye witness account's and then back again. Because I absolutely love Ufology. But, I must get back to the story at hand:

"that thing's moving, that thing's a UFO for sure" states the 1st of the UFO witnesses. The witnrss then state's loudly "whoa, whoa, whoa - what is that" which I think is the best reaction so far this month that I've heard.

It's a genuine UFO sighting reaction.

Guy's, seriously remember the tone of this guy's voice because it's a genuine reaction to a UFO sighting. By having a bench marker of what a genuine UFO shriek sounds like, you'll hopefully be able to make a far better determination in the future!

Some thing's are timeless, ageless and will always garner the exact same reaction because it's the nature of the surprise.

There's another guy in the video also and a woman. So that's 2 guys and one woman all reacting as you'd totally expect a group of people who are sharing the same out of this world experience to react.

This UFO sighting only happened a few days ago on the 1st September 2022, Spicewood, Texas US. Apparently the local police didn't receive any phone calls but that's not unheard of. Also for military Jet's or any aircraft for that matter to fly in tight formation of this nature requires a permit at night "apparently" so it says on BroBible.

Please can you share this post, cheers. Also leave your thoughts on what you think about it, thanks.