Multiple UFOs Hovering Over A Suburb In Brazil

Here's the extraordinary video which was filmed over Brasil showing a set of UFOs or just one UFO but it's got multiple light's on the outside of it.

Here's a fantastic video showing a set of strange anomalous light's in the night time sky in Brazil.

It's not clear as to the identity of the craft, or multiple craft's ie if it's a single UFO or multiple UFO Orbs but I'll tell you now that it's a truly strange sight for anyone to witness. 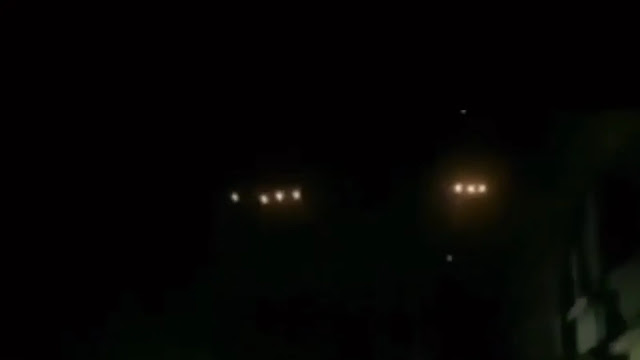 There's no way that it's the military Air Force or anything else like that because for one thing there's no typical helicopter engine noises or Jet engines making their unmistakable sounds. Any military aircraft's couldn't be flying so close to the ground and in such a built up area.

Brasil see's some of the best UFO sightings of the modern world. It could be any number of reasons for this but the lack of camera's isn't one of them. Some places see more UFOs than others but nobody can say why that is? It's definitely a real hotspot.

That rules out so much based on common sense but we don't really want to be dismissing everything otherwise it'd be a bit short sighted. Keeping everything on the table is the right thing to do after the obvious stuff has been done away with. Is this Brazilian UFO sighting even real?

I think the answer to that is a personal one as it might never be revealed what it is so that being said it's pretty much up to you as to what you think it is (thank goodness for free, open mindedness).

I'm staying open minded and I'll be honest, while it looks like a UFO sighting, fireworks display does come to my mind. Drones could be the culprit? With just a few drones this strange looking UFO event could easily be replicated.

What's your thoughts on this UFO sighting and have you got anything else that you would like to add? If you do or if you've seen something else like this but somewhere else, please share it with us in the comments section below, thanks. If you can share this post I'd appreciate it, thanks.