This UFO sighting over Escondido CA USA was sent to me twice from different angles literally just around the corner from each other. 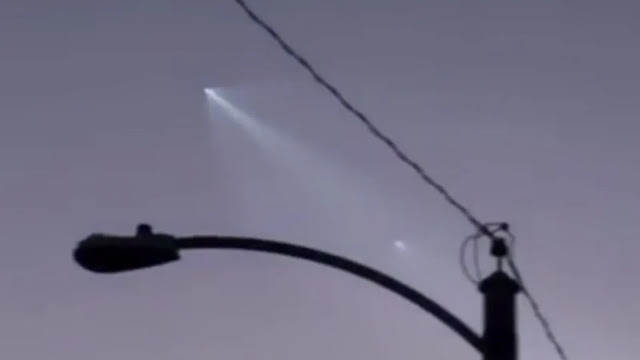 Apparently, according to the first witness who contacted me this morning there was helicopters and a portal. The actual description as it was sent to me is just underneath the Instagram embedded post below.

I was contacted early this morning via Instagram about a UFO sighting which I have since posted to my Instagram page. I'll add that post here:

That's the first time I heard about this UFO sighting in particular. In fact this description came with the video; There was a PORTAL in the sky! And two UFOs came from the portal! Large Military helicopters were out, all over town in Escondido CA.

Then not long after, say just a few hours or so (give or take 10 seconds) another person has contacted me and check this out, they're literally from just around the corner from the first people who filmed this UFO sighting.

Escondido, CA USA is not usually known for UFOs as when I Googled Escondido CA UFO sightings it only brought back one UFO sighting from 2012 which was uploaded to YouTube by Trevor Paris.

This UFO sighting is a double UFO sighting and it really does look like the first one is being chased by the second UFO?

Disclosure from the US Government has been invaluable for Ufology in recent years.

The UFO sighting reported to myself today sees 2 UFOs in the sky with the first one leaving a trail as if it was a rocket launch? But the fundamental difference between a launch and a UFO sighting is that the launch of a rocket doesn't ever have a UFO chasing it or following it.

The guy in the car point's out that there's another UFO behind the first UFO. He's at traffic lights and is looking at the UFO sighting and filming it. It's almost as if it's glowing or brightly illuminated? Is it a reflection because it's sunny enough and high enough to have the last ray's of the Sun reflecting off it.

Here's the second UFO sighting from around the corner in Escondido CA USA:

All respective credits below, bottom.

But on a whole UFOs really speak for themselves because once you've seen one you'll never forget that snapshot of it in your mind! So I'm told because it's true, I've never actually seen a UFO. My intrigue was all natural (and I'm sticking to it lol).

And not only has the UAP disclosure gained a ton of new fan's but it opens up a new chapter in people's lives and some start to see other thing's that previously never even got their attention. The main thing is that people start to see that there's nothing to laugh about UFOs and I'll tell you exactly what is superceding the ridicule is curiosity.

Whereas once people mindlessly pointed at a UFO maybe on TV and laugh, people are stopping that and thinking "actually hold up, go back to that" next thing people are curious about UFOs. We're on the brink of full disclosure! Here's why...

Did you ever think for one minute that the US Government would admit to UFOs but then release multiple UFO videos and say it's exotic technology from off world. It's not another countries advanced aerial technology.

The only thing left is the proverbial "wheel em out."

The only thing left is for the US Government to "wheel em out!"

And do it now.

See, I'm being nice I even said please.