Airforce officer has gone on record and stated that US Government definitely knew about UFOs shutting down nuclear missiles and they lied about it.

Air Force officer regarding the Pentagon said this; The Pentagon lied when they denied knowing that a UFO defused nuclear missiles.

UFOs "shut down nuclear missiles at a US military base and may have been alerted to humanity by the first atomic bomb blasts." 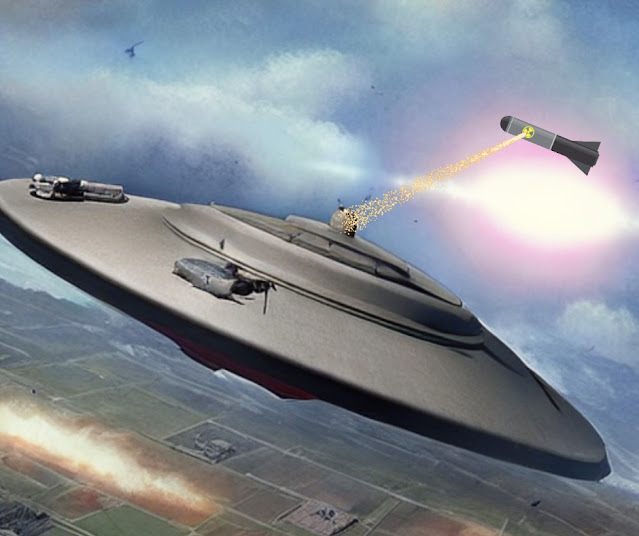 I really enjoy going back through the old statement's and press releases about military UFO sightings and the denials but now I'm taking into account what has happened over the last 5 year's with UAP disclosure.
It's almost like we're reading from a different planet's perspective and nothing sound's remotely similar to today's stance. It's a million miles away from the truthfulness of the UAP investigations of today's modern take. It's a good thing though that UFOs have been accepted by the US Government and all it's acronym agencies. People needed that extra reassurance from authority I assume...

Now this is some truth I can actually get behind and actually accept it as the truth as well, the whole truth and nothing but the truth, so help me God - UFOs are real.

Lee Lewis UFO Researcher
See, it's really not that hard to tell the truth is it, to us it's easy but it must be going against their nature and they won't be liking it at all. They lie day in, day out because it's their nature as a secretive agency.
There's nothing bad gonna happen or anything else like that by telling the truth to the public. That's all in their heads. When was the last time a UFO threatened any national security? See, if we ask that question and they answer it then they must acknowledge it. But if they don't answer it, then they can't say they're a threat. A catch 22 situation for them.
I think the only bad thing about it is the lying? Seriously, the truth people can handle because it's just how it is, nothing can change it, it's not worth getting upset about. But lying, the Pentagon chose to do that because it's inherently a dishonest agency and nefarious through and through.
Can they even back track if they (the Pentagon) wanted to? Can anyone bring them back from what they do, and have done for a long time?
Every single director that has come into office, has by default added to it by not doing anything about it. Ignorance is no defense, everyone knows that.
Anyways, Luis Elizondo released the UAP videos initially and that's when the Pentagon, the US Navy and cohort's decided it was time to come clean. Which, it's to little, to late because they was forced into it. If it came out of left field without any initial whistleblowers then that's fine but it took a brave guy to take that leap of faith.

UFOs or UAPs deactivating nuclear missiles: According to Luis Elizondo “There does seem to be some sort of congruency or some sort of intersection between these UAP or UFO sightings and our nuclear technology, whether it’s nuclear propulsion, nuclear power and generation, or nuclear weapons systems. Furthermore, those same observations have been made overseas in other countries. They too have had the same incidents, so that tells us this a global issue.
Now in the US, we’ve had incidents where these UFOs/UAPs have interfered and actually brought offline their nuclear capabilities. One of the most famous cover-up cases was the UFO that shutdown nuclear missiles at Montana’s Malmstrom Air Force Base in 1967.

It's a truly wonderful day and age when someone can stand up for something that they believe in "in this case the truth" and amazing as it is, it's first and foremost historical and has changed said history forever, what a brave individual he is! The truth can now be born through it.

But, it seems like the UFOs or UAPs (I'm old school so it'll always be UFOs) that these UFOs are playing games with us. They can turn off, intercept and destroy missiles and it seems that they know which ones are the nuclear, atomic and or hydrogen bombs or missiles if you like.

Yes, on many levels because what if a foreign country is in cahoots with the UAP makers? It sounds crazy I know but UAPs are real, someone or something made them and it wasn't us!

So, I'll go back to that "crazy question" what if a foreign country is in cahoots with the makers of the UAPs?

It doesn't sound so crazy now because we've had bona-fide real life acceptance from the United States Government that Unidentified Aerial Phenomena is real. And the craft's that was filmed flying around the Nimitz which became the Nimitz encounter and the Theodore Roosevelt encounter are real Unidentified Flying Objects.

With this fresh in the mind, nothing is crazy. In fact, UFO believer's have been totally vindicated big time. We knew that they knew, and we said one day we will have truth on our side! That day has been and gone, what's left is simply mind blowing in terms of the implications of what's going on.

There's a billion thing's that I can continue writing about on this subject and the implications of digging through old statement's or something that was officially released when the government was totally against releasing anything related to UFOs.

Now we know why they was actively mocking Ufology, actively looking for any reason to explain UFO sightings away as a weather balloon, swamp gas or experimental aircraft etc. But at the end of the day it's all about bringing awareness of UFOs to everyone on the planet. Now more than ever everyone should know about these unknown and let's not forget that they're uninvited visitors as well! But I suppose dwelling on the past isn't going to solve anything, or is it...

These no longer fringe society beliefs because the existence of UFOs have been taken extremely seriously because it is a very serious concern as not only have the public been gathering information on UFOs but so has the US Navy, Pentagon, Department of Defense and others to name but a few. Ufology has been accepted by the US Government and they in turn released a bunch of UFO videos!

Late Senate Majority Leader Harry Reid, whom Las Vegas airport is named for, said the government has been hiding details of UFOs for years (and that we’re hiding fragments of a crashed spacecraft). Former CIA Director John Brennan thinks there may be life on other planets too. NASA’s director said UFOs are real and may be aliens.

The UFO believers list is long, it's growing everyday with champions in all departments of the Government. The investigations are gaining traction and the statements being gathered are real. But not only that because it's the weight of the Government's inquiry but also it's because people are looking into UFOs like Ufology has never been looked into before.

Small independent study groups have popped up over the years which has kept the momentum going like MUFON and NUFORC etc but when the US Government actually opens up it's full Government funded, already established agencies and departments which includes branches of the military and all it's subsidiaries. Ufology has taken it's biggest leap forward ever (but in the right direction we will have to wait and see) since the actual formation of this genre "period."

The UFO genre has opened up to such scrutiny that for believer's it's vindication and for the general public it's a step into the unknown. Is it one step to far for some? Maybe the people that don't keep up with Ufology it might seem like a folly or wasted taxpayers money?

But for those of us who follows Ufology it's been a long time coming and now it's here, a lot of people are going to be shocked by the results especially with what's already happened with UAPs and Tic Tac shaped UFOs.

Get ready because we've just been prepped for something big in my view?

Here's a video about the officer that has gone on record and stated the Pentagon lied about not knowing that UFOs (which are UAPs) defused nuclear missiles over military base and nuclear missiles and that possibily we alerted Extraterrestrials to our presence when we tested the first nukes:

If you've got any thoughts or opinions on this amazing story then please let us know in the comments section below, cheers. Also please share this post, thanks.

Here's an interesting post about American Airlines "American Airlines confirmed UFO contact over New Mexico last year. Last summer the DNI Office submitted a report to Congress on what the federal government knows about unidentified aerial phenomenon. And it seems like we don’t know much. Something is out there, and we cannot explain ‘it’.