A UFO sighting happened at the ISS on the live feed as NASA could not turn off the camera because they was at the critical point of the whole mission.

A UFO was filmed by NASA at the ISS as NASA engineer's zoomed into the work being done to try to and hide the UFO.

They never had a camera from another angle so they just had to crack on and ignore it. 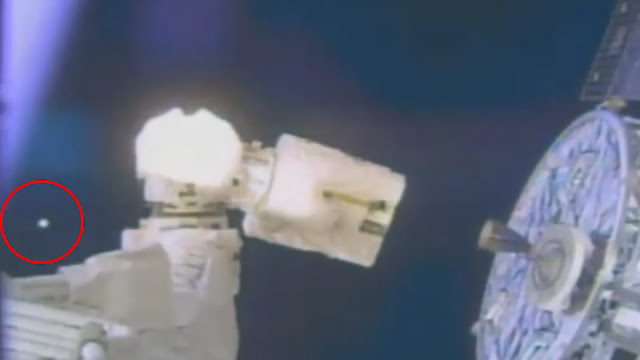 NASA engineer's can't turn the camera off as it's the pinnacle of the whole mission.

This happened on February the 14th, 2014. It's a truly fantastic example of a UFO sighting turning up randomly at the ISS and NASA been caught in the cross hair's. They was unable to turn off the camera at such a crucial stage of the mission which was taking control of the capsule.

NASA zoom in to hide the UFO.

They had to keep the cameras rolling this time because it looks as though they didn't have another camera to switch to? But this is NASA that we're talking about isn't it. So, no matter what happens, they'll just deny it and that could be directly denying it with word's or just ignoring it! Either way NASA has denied it.

And that's exactly what happened!

Don't forget though this is February 14th, 2014 and we have the luxury of a fast forward from this UFO event to now. We know what happens after this UFO event.

They could have easily explained it away afterward which as it turns out they never actually did. They just ignored it like usual. but if needed to they would have done so. They have never looked into any UFO sighting that came into sight on the ISS live feed. You did know that didn't you? It's a case of the camera been turned off normally and later the cameras come back on, NASA doesn't even mention the UFO that came into the screen just before the screen went off.

You'd think that because NASA is the designated official Extraterrestrial life chaser in space that they'd at least look into any UFO that "actually came to them" but no, absolutely not!