Totally Frightening Pictures That Are Really Freaky And Terrifying!

Now these images are very unsettling and terrifying to say the least? You really don't need to come in to contact with any of these things, at all. From burrowing Bot Flies to creepy, scary 2 headed dolls and even a stalker caught watching children! A child is snatched by an Eagle and carried away for food. Whilst visiting the grave of this ladies mother, a photo shows alot more caught in the images? OMG a leach swims up this ladies, well you'll just have to see for yourselves? Continue reading here.

I don't want to really write much because I want the pictures to say it all?

I will give you the run down on the pictures if needed? Now these images are really unsettling and very terrifying to look at!


This could be an innocent scenario where someone just happened to walk by when this picture was taken. Photobombs happen to the best of us. But I don’t believe that. I prefer to believe that the man in the rear had been there for quite some time. Watching the children… probably picking out the one who’d give him the least resistance. Transfixed in his thoughts of kidnapping, he probably didn't even notice the camera until it was too late. 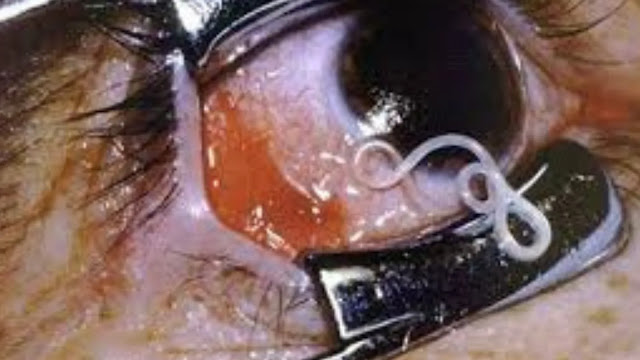 Nope. No way, man. I wouldn’t buy this and gift it to my worst enemy’s child. This terrifying thing was made sometime in the nineteen-twenties. During that time, these Jekyll and Hyde Dolls were all the rage. I don’t understand why. I can only guess that their true motive was to make sure the “angel” face was turned forward until dusk. Then the evil side reared its ugly head and ate the child. Just a theory.


In 1959, Mabel Chinnery was visiting the grave of her mother in a British cemetery when she took a picture of her husband, who was waiting alone in the car. It wasn't until Mrs. Chinnery had the film developed that they realized her husband hadn't been waiting alone after all. The picture shows a person wearing glasses sitting in the back seat, and Mrs. Chinnery immediately recognized the figure as being her mother — the mother whose grave she had just visited.


The botfly is possibly the nastiest, most terrifying bug on the planet. Anything that can burrow into you, use you for nourishment, incubate, and push its way out of you is disgusting. I’d rather get sucked dry by a lamprey eel. These things love them some livestock, but they sometimes find their way to a human host too. The botfly is not a picky eater. My skin is crawling right now!


Daniela Liverani started getting nosebleeds but chalked it up to a motorcycle accident she previously had. She thought that the crash had resulted in a dark blood clot, but it wasn't until she saw the blood clot moving that she realized it was something alive. It turned out that Daniela was housing a leech that was three inches long. She believes it crawled up her nose when she was backpacking in South East Asia a month ago. She named it Mr. Curly.


Mr. Lusk, Sir, I send you half the Kidney I took from one woman and preserved it for you. The other piece I fried and ate. It was very nice. I may send you the bloody knife that took it out if you only wait a while longer. Signed, Catch me when you can Mister Lusk


The terrifying picture below is a real hospital room photo of Blanche Monnier, a French girl who was kept captive for 25 years in a padlocked, shuttered room where she was forced to live amidst pests, rats, human excrement, and filth. Her discovery occurred on May 23, 1901, after the Paris Attorney General received an anonymous letter indicating a woman was being held captive in a home located on “21 rue de la Visitation” street in a wealthy neighbourhood of Poitiers, France.


This gruesome, emaciated creature began life as a cute, attractive toy, bought by parents as a gift for their child. Like many playthings, the doll was eventually consigned to the attic. But as it lay gathering dust, demonic forces set to work. When the family retrieved it 11 years later, just like Dorian Gray’s infamous portrait, the doll had withered and aged.


The Filarial Worm is a parasite that can live in your eye. Filarial Worms are most commonly transmitted by mosquitoes. They are highly known to cause what’s commonly known as “River Blindness.” These terrifying parasitic creatures, which travel to the lymphatic system, are also responsible for the condition known as Elephantiasis.