To understand what I am saying from the geological point of view, you have to get to know several things. What is known as Adam's Bridge is originally a natural grade divide separating the Bay of Bengal and the Indian Ocean to the south. So, the geological aspects are different on either side.
A Google image of Adam's Bridge or Ram Sethu. 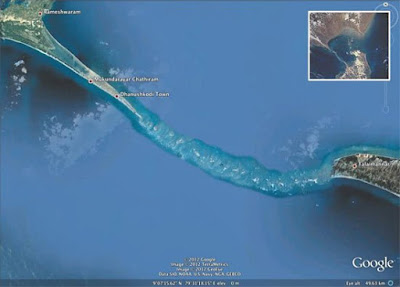 Dr Badrinarayanan was former director of the Geological Survey of India. He was also former coordinator of the survey division of the National Institute of Ocean Technology, Ministry of Earth Science, in Chennai.

As a geologist who has done studies on the geological aspects of the area where Sethu Samudram Canal Project is being undertaken, Dr.Badrinarayanan puts forth some interesting findings on the area in an interview to Shobha Warrier.

As a geologist, how do you describe Ram Sethu? Is it a man-made structure or natural formation?

To understand what I am saying from the geological point of view, you have to get to know several things. What is known as Adam's Bridge is originally a natural grade divide separating the Bay of Bengal and the Indian Ocean to the south. So, the geological aspects are different on either side.


About 18,000 years ago, we had Ice age when the sea level was lower by 130 metres than what it is now. Due to de-glaciation, the sea level rose. Around 7,300 years back, there was major flooding and the sea level rose to 4 metres more than what it is today. This has been verified by several researchers throughout the world. But the bridge that connects India and Sri Lanka is different; it is not just a sand dune. Have studies been done on this particular phenomenon? We (Geological Survey of India) were asked to carry out surveys for locating the Sethu Samudram Canal project by the project authorities in 2004-05. Any startling revelations?

When we reached near Adam's Bridge, there was sudden rise in the land level. From about 10-12 metre, it rose one metre to half a metre. So, our vessel could not go and survey the area. In some areas, we did survey using small boats. The northern side of Adam's Bridge is the rough Palk Bay, which is prone to periodic cyclonic storms, and the tranquil southern side is the Gulf of Mannar, which is unpolluted and pristine. Corals grew in the tranquil Gulf of Mannar but not in the turbulent Palk Bay as they grow only in tranquil waters. There are about 21 islands full of corals in the Gulf of Mannar side but not even a single coral on the northern side of Adam's Bridge.


I would say no proper geological survey was done in the area. Normally before any major engineering project, GSI conducts engineering geological study, geological study, geo tectonic study, seismic study, etc so that we will know whether the project is safe or not. You mean no such studies were done before this project? Earlier, GSI had done some drilling but only at the deeper level of about 180-200 metres, but they have not mentioned anything about what was happening at the top portion. We did a study from NIOT on our own connecting between Rameswaram and the international waters.

We did around 10 bore holes along the Adam's Bridge alignment. Four of the bore holes were along the islands (where sands go on shifting) and six in the water. Everywhere, after top 6 metres, we found marine sands on top and below that was a mixed assemblage of corals, calcareous sand stones, and boulder like materials. Surprisingly below that up to 4-5 metres, again we found loose sand and after that, hard formations were there. How do you explain the presence of loose sand? It shows the structure is not natural. I will explain. Corals are found only on rocks and such hard surfaces. Here, below the corals and boulders, we are getting loose sand, which means it is not natural. And, on top of the loose sand, which was formed when the sea level was low, our divers found boulders. Boulders normally occur on land and they are a typical riverine character.

That is why we are getting two sets of corals at two levels. Dr P K Bannerji has carried out a lot of studies on the raised corals and his papers have appeared in reputed international scientific journals. His arguments are backed by very good scientific data. So, either between 5,800 to 5,400 years ago, or (some time since) 4,000 years ago, somebody appeared to have brought all the boulders and dumped them there. All the aerial pictures show that Adam's Bridge is 2 to 3 kilometres wide. On the eastern side, it is high. So, anyone could take advantage of the raised portion and must have dumped these boulders so that he could cross the bridge. How do the boulders look, and from what were they made? The shape of the boulders and the type of material clearly indicate that this is a man-made structure. We saw similar rocks on Rameswaram islands and also in Pamban. On either side of the railway bridge, you can see these formations as well as the raised corals. There are indications of quarrying also there. All these things lead us to believe that 2 to 2.5 metres of packed rubble or material appears to be a modern day causeway. For 30 km, nobody dumps materials like that. Obviously, it was dumped to use it to cross the sea. Moreover, they are compact and light.


It is also quite obvious that the boulders were used to cross over because in all the bore holes we made in the entire stretch of Adam's Bridge, we saw the same material. It appears like a rock-filled structure. If it is a geological phenomenon, you will find the oldest formation below and the newer ones on top. I would rather call it an anthropogenic (pertaining to the effect of human beings on the natural world) causeway rather than a bridge. What else have you learnt from the studies you have conducted along Ram Sethu? We have found that geologically and geotectonically, this area is very sensitive. Many people are not aware of it. All around the north, there are spots where there is very high temperature below. When we drilled, we encountered hot springs of 60 to 70 degrees Celsius. Whenever there are earthquakes in Sri Lanka, we get the vibrations in the Indian side also. That means a major fault is running there and it is very sensitive. This area is also known to have earth quakes and they had happened one or two centuries back. To the north and the south, there are indications of old volcanoes. Because of these hot springs and presence of volcanic zones, do you feel if disturbed, it will affect the equilibrium of the entire area? What you said is correct. That is why, before venturing into anything, you have to make a comprehensive study. This area has attained some sort of equilibrium over many centuries, and all the drilling and blasting of rocks may activate the fault and may trigger seismic activity or earth quakes. It may also trigger other events, which may be very detrimental. That is because the hot water from the north, which is blocked by the Adam's Bridge, will come to the south and will disturb the coral islands. The result will be the destruction of the corals. Not only that, whenever there is a major tsunami or cyclones in the Bay of Bengal, it is blocked by the so called bridge. Out of 18 depressions in the Bay of Bengal at least six turn into cyclones.


The tsunami expert Dr Tad S Murty, said that if not for the bridge, the entire southern part of Kerala would have been affected badly. Yes, it would have completely affected the entire south India. We were the people who suggested it. We had done a study, of course not knowing tsunami is coming, and felt the structure will prevent the Tuticorin area, the southern part of Kerala and all the coral islands from getting affected. The calm tranquil water in the Gulf of Mannar full of coral islands is because it is protected all around. Why do you want to destroy it when nature has blessed you with something so beautiful? This is the first declared marine national park in the country. Another point I want to make is, some dams trigger earth quakes. There is a possibility it can happen here also. So, it is prudent on part of the government to study all these aspects before taking a major decision. Do you feel the construction of Sethu Samudram project was initiated in a hurry without conducting proper study? I think so. This portion is not like any sand dune. This is a very sensitive heat flowing area. I feel the Geological Survey of India should be asked to do a survey. Was the Geological Survey of India not asked to do a study on this project? No. Nobody has carried out any survey at all. We only did a survey to locate the alignment. So, but what is needed is a comprehensive study. What has been formed over centuries by nature cannot be disturbed. In foreign countries, even a hundred-year-old structure is preserved and this looks like it is thousands of years old. No doubt such a canal is essential but not at the cost of nature. We are definitely for progress but our progress should be sustainable.

What do you think about this story guys? Is it wishful thinking or is it just a natural phenomenon at play? Are we being tricked by a mother nature that is playing games and making us believe that nature is not capable of being intelligent? Let it be known that the natural processes of life and the big bang gave birth to everything so to think that nature isn't capable of doing something so spectacular like building a land bridge, well think again my friends because the world came about by way of intelligent formations and intelligent cohesion of all the elements and everything you see now, today!


Abstract pattern is ubiquitous throughout the living realm. This image of radiolarian shells is taken from Plate 31 of Ernst Haeckel’s Kunstformen der Natur (Artforms of Nature),1904.