Why the hell are these Secret Sites even there?
What's the point of ploughing pure dollars in to TOP SECRET PLACES? Where's the money coming from and what other Government funded "agencies" if you know what I mean... are going without because of these secret installations?
Aurora Black Budget Aircraft
The Daily Mail 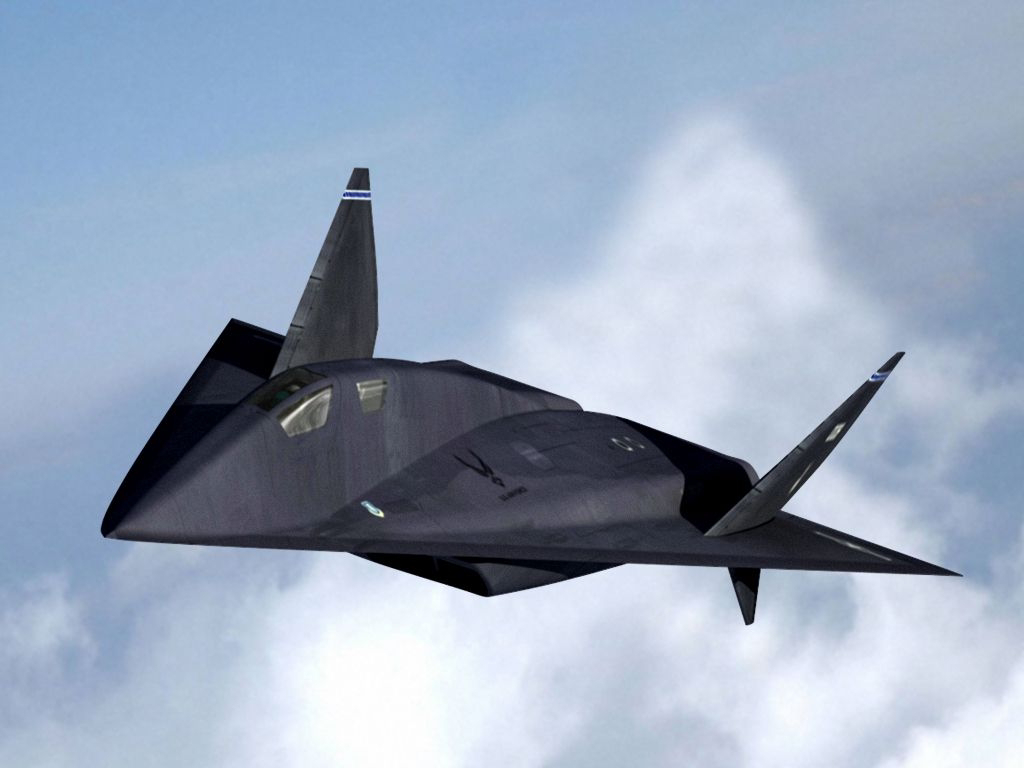 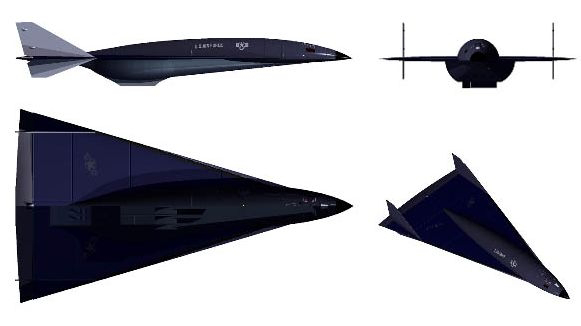 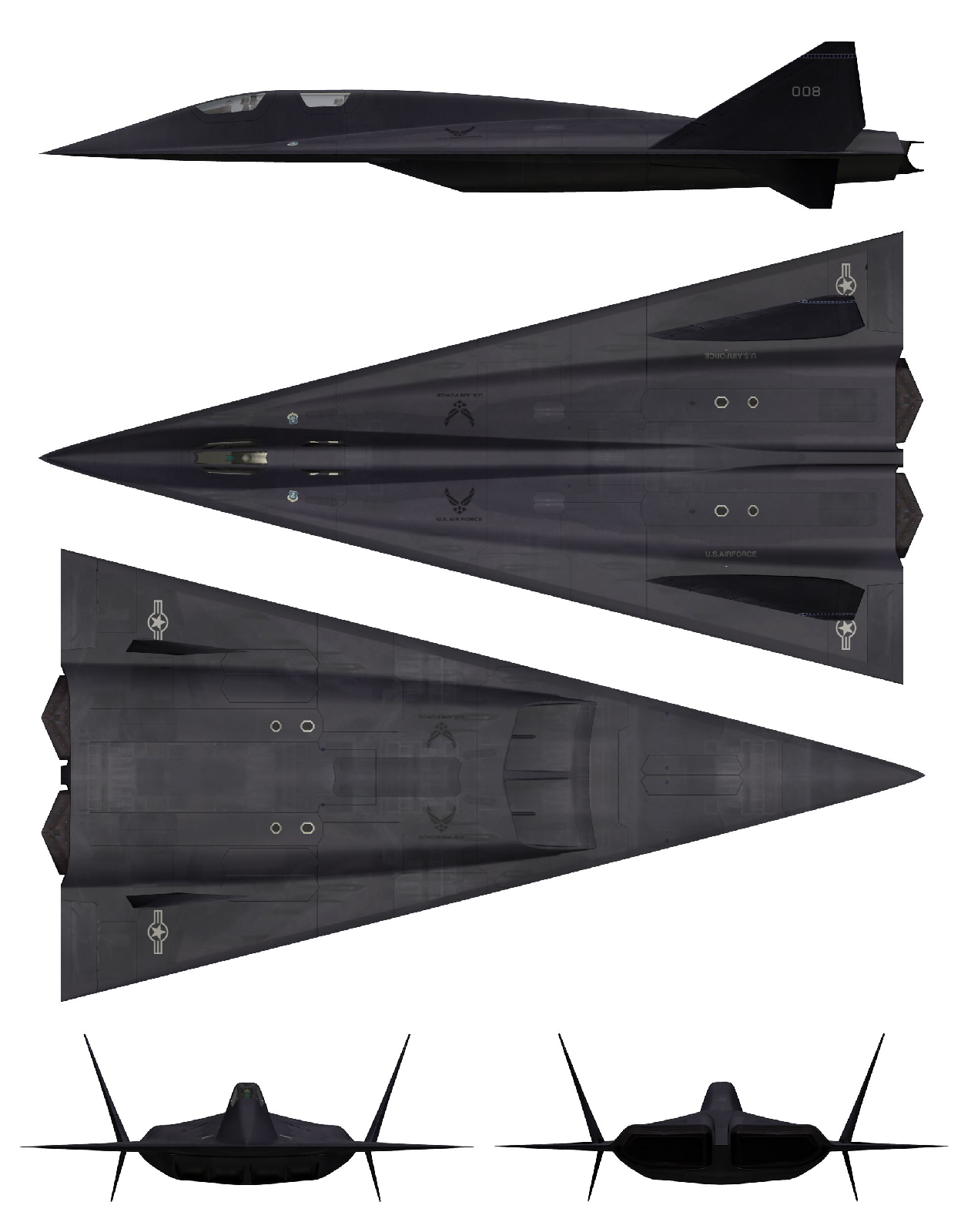 We think that these are legitimate questions which should be, no "must" be asked and definitely answered?
Aurora is rumoured to be a top secret aircraft in development since 1989.
Last year Lockheed Martin announced it was developing a similar SR-72 spy plane (illustrated) said to be able to accelerate up to Mach 6
If these so-called "Black Budget" operations are being funded then money has to be diverted from somewhere, right? We don't think that the Government officials are funding them out of their own pockets, are they? ABSOLUTELY NOT!

So again, we ask the question out-loud "where is all the capital coming from" to pay for these very, very expensive and most unusual, top secret installations? Is it diverted from hospitals? Is it diverted from schools? Is it the industrial military complex itself paying for the buildings? Is it from World leaders and politicians own salaries, hahaha! LOL?

That actually tickled me typing that bit. Can you imagine politicians actually funding "official" secret op's from their own salaries? That is daft as a brush! It must of put a smile of joy with tears of happiness on your face, because you know how ludicrous that actually sounds?

So anyways, my esteemed friends.

It's probably safe to say that computers and Google, plus the internet are thee greatest technological innovations and one of the most redesigned inventions and innovations of the last 15 years. People can design and redesign addons and invent (plus reinvent) "stuff" that fits it like a glove? No-other piece(s) of technology in the history of "people kind" which is now the preferred terminology - has changed so radically not only itself but the peoples lives that use it practically everyday? Adopted by many countries throughout the world, computers have literally acted like a living organism? It has evolved and it is still evolving. When will the computer and everything that goes with the computer stop evolving?

With just a few clicks, you can view any place on the face of the Earth. Well, almost any place. There are some areas of Google Maps that, for one reason or another, are concealed or obscured in some very obvious ways. 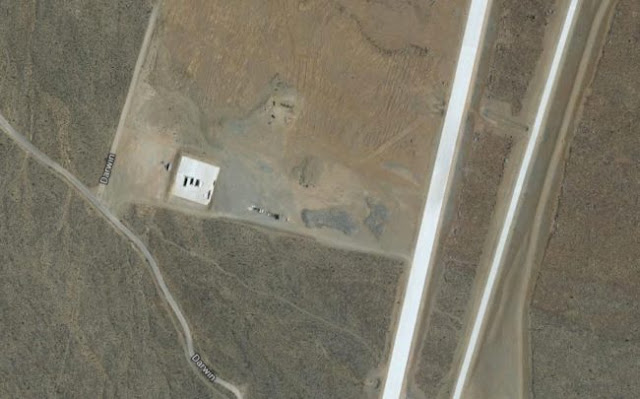 Junction Ranch is in the middle of California's Mojave Desert. There lies a mysterious airstrip...some believe it's part of the China Lake proving grounds, which is an air force testing location for drones. While that's suspicious in and of itself, even weirder is that only parts of the base are obscured from Google Maps.

When you zoom in on the base's location, there are parts of buildings intentionally scratched out. What's going on down there? 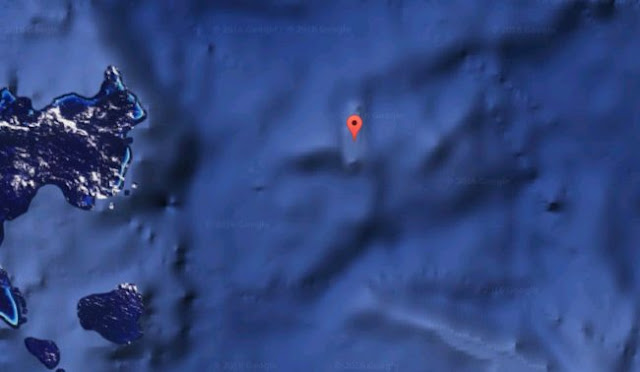 Sandy Island was discovered by Captain Cook during his explorations of and around Australia in the late 1700s. However, despite the island being seen on maps for the last 200 years, the area where Sandy Island is supposedly located is mysteriously blurred out on Google Maps. Something fishy is going on there. 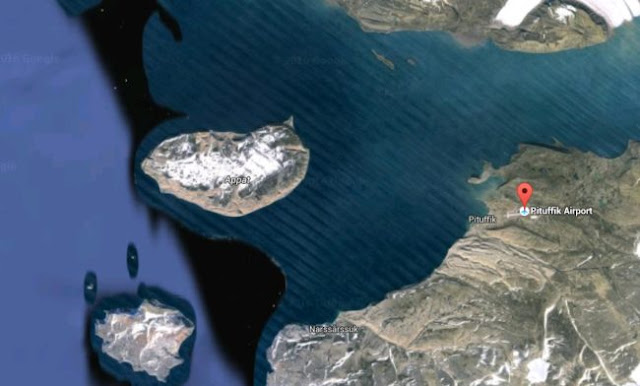 During the Cold War, the U.S. had B-52 bombers carrying nuclear weapons on a regular basis. This strategy was supposed to serve as a deterrent to the Soviets. However, accidents happen and in 1968 a plane carrying a nuclear payload crashed while taking off from Thule Air Base in Greenland. During the crash, the nuclear weapon was said to have released a significant amount of radiation into the surrounding environment. The area of the crash is still blurred out on Google. 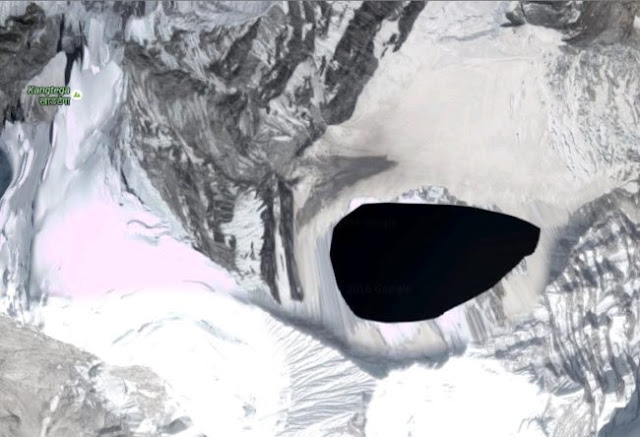 This mysterious area in the Himalayan Mountains is completely blacked out on Google Maps. While the potential reasons why it's blocked range from a military base to Nazi UFOs, it's unlikely that we'll ever know the full story. That is, unless you want to hike up all 22,000 feet to find out.

A number of places have mysteriously been blacked out by the Google Maps Goon's, so-to-speak? I mean what else do you call someone who bend's down to the will of the World Governments. Hundreds of sites around the world are blurred out or can't be seen on Google Earth.

here's absolutely no doubt that Google Earth satellites are the ultimate spying tool. With the aid of a computer anyone can simply key in an address and have a nosy around getting up close to some of the most famous places on earth.

But while you can hit up the White House, Buckingham Palace, the Egyptian Pyramids, the Great Wall of China and even get a bird's eye view of the The Ryugyong Hotel in Pyongyang at the click of a mouse - some mapped sites are completely out of bounds. Conspiracy theorists have uncovered a host of sites online that are obscured through pixelation, blurring or have a case of total wipe out. 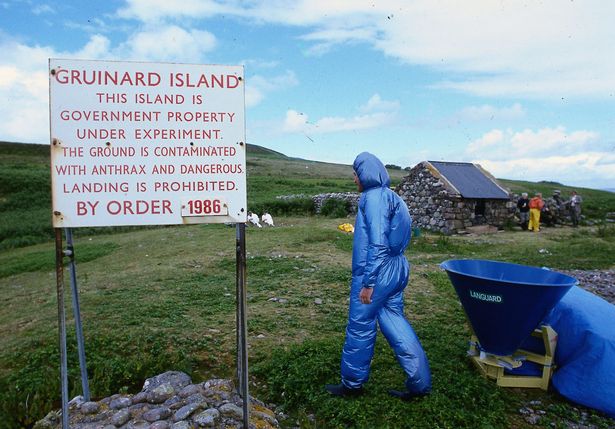 Anthrax island: Gruinard in Scotland is a no man's land after testing was conducted (Image: Mirrorpix) This small, oval-shaped Scottish island is just over a mile long and less than a mile wide, but if you try to hone in you won't find much. Located in Gruinard Bay, about halfway between Gairloch and Ullapool, it has been uninhabited for decades after British scientists exploded a series of anthrax bombs there during the Second World War. 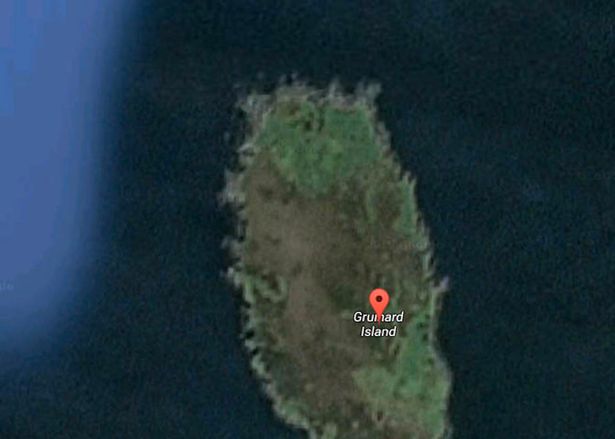 They tested the chemical weapons on 60 sheep all of whom died within days. While it was "decontaminated" in 1990 - it was shut for five decades before this and to this day remains a Google Earth mystery - not to mention a no go zone. 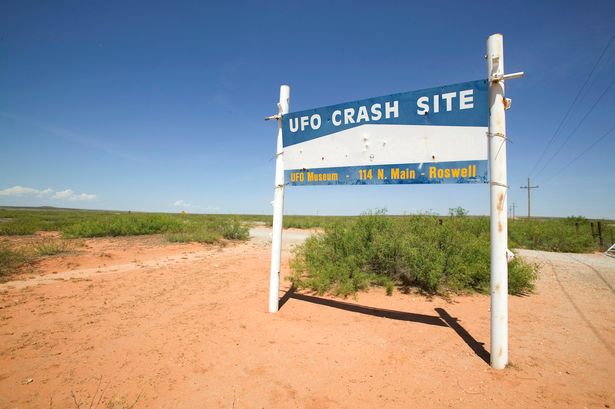 Roswell is one of the most notable UFO sights in the world but try and take a peak at what it looks like from the sky on Google Earth and you'll find difficulty. This world-famous New Mexico community became notorious in 1947 when a United States Air Force 'surveillance balloon' crashed at a ranch close by. 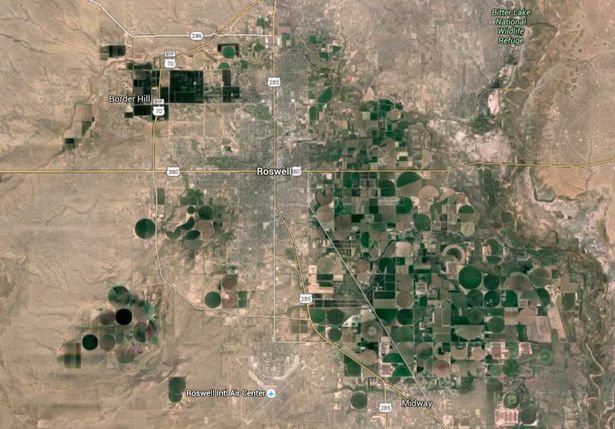 Back then there were many reports that an "extraterrestrial spaceship" had crashed - and the military were quickly accused of being involved in a cover-up after claiming the incident involved a weather balloon. Later in the 1970's there was more claims an alien spacecraft had crash-landed and that the aliens were taken to a secret facility. 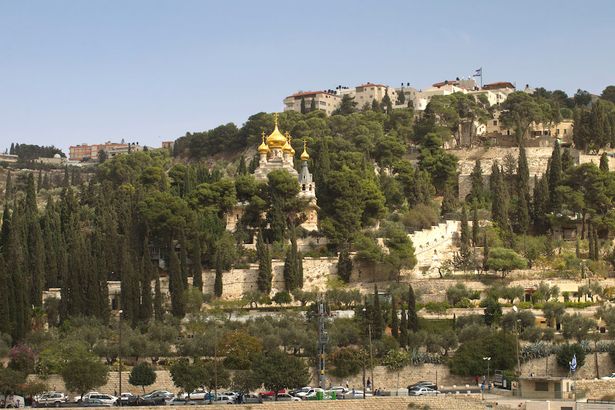 Gethsemane or גת שמנים‎ in Hebrew is one of the most sacred Christian pilgrimage sites on the planet. Mentioned in both the Gospel of Matthew and the Gospel of Mark it is said to be the garden where Jesus spent the night before he was crucified. Covered in olive trees, some of which are 900 years old, it is situated at the Mount of Olives in Jerusalem, Israel. 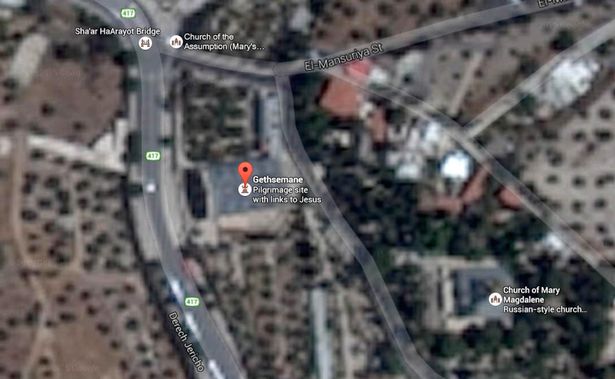 Its exact location has been disputed over the years with some historians claiming it's a few hundred yards north of its current site. As well as being the place Jesus is thought to have settled the night before he died, it's also said the Virgin Mary was buried there before being assumed to heaven. But while millions of pilgrims have made it to the site to see for themselves - on Google Earth it's all a bit of a blur. 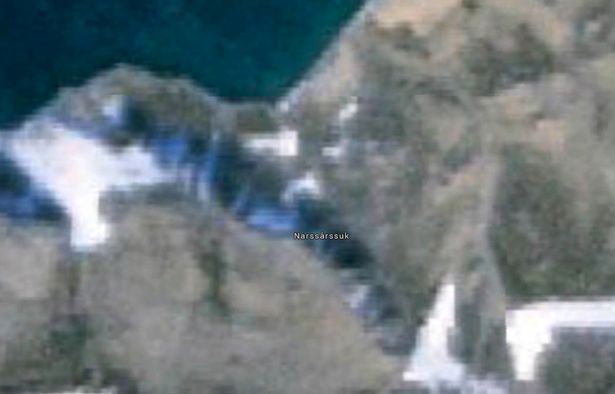 The nuclear weapon carrying bomber crashed onto sea ice in the North Star Bay causing its on-board explosives to detonate, which in turn caused the nuclear material to rupture and disperse making the entire site contaminated with plutonium. Nowadays you'd be hard pushed to see what it looks like using satellite imagery. 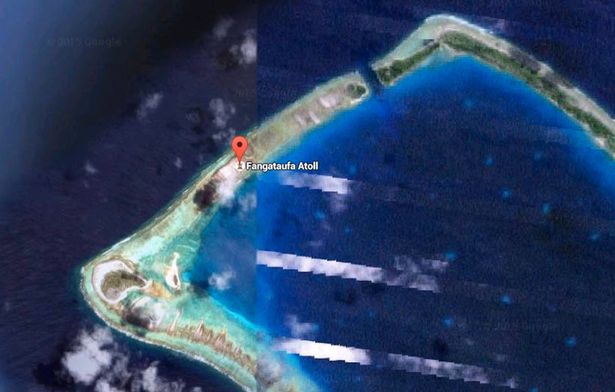 Shockingly 193 nuclear test experiments were conducted there from 1966 to 1996, including 137 underground tests which were lowered into the lagoons. Over the years many studies have been done to identify the damage and France has been urged to clean up the environmental damage which still exists.

Volkel Air Base - The Netherlands 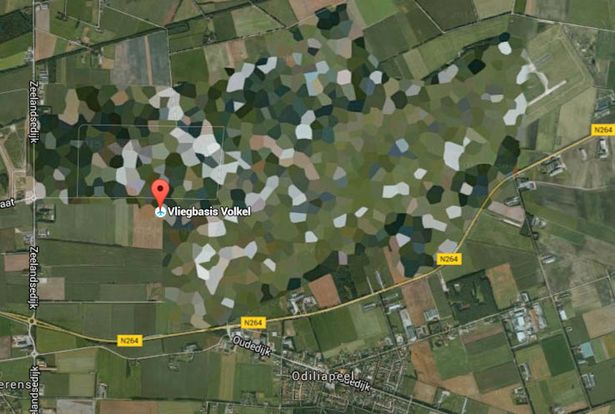 Volker is one site which has been digitally obscured from viewable satellite map services. According to reports the site was outed by WikiLeaks as having nuclear weapons on site. And while it's quite often used for air shows and by the Dutch Royal Air Force it's presence is somewhat controversial.

It's well known that it has 22 tactical nuclear bombs which are said to be owned by its ally the USA, it was a strategic centre during the cold war, but in latter years has been described by the country's former Prime Minister as "absolutely pointless". It is home to two F-16 Fighting Falcon squadrons, 312 and 313 as well as a traumahelicopter operated by ANWB Medical Air Assistance 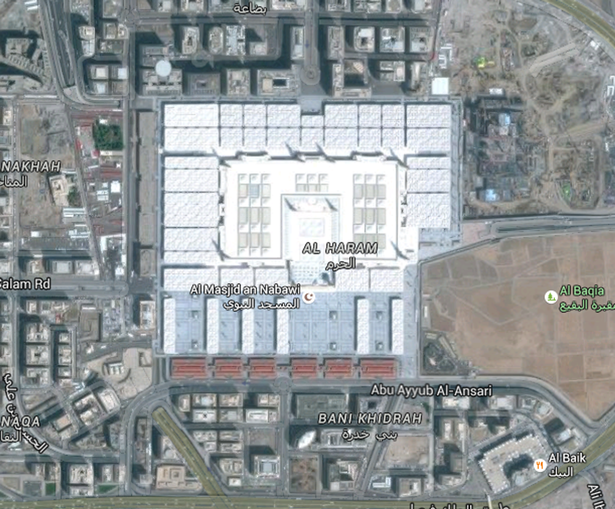 Medina or المدينة المنورة‎ in Arabic is also known as "The Radiant City" but you wouldn't be able to tell that from this Google Earth image. Based in Hejaz, Al Madinah Region, Saudi Arabia, it is one of the most sacred places on earth for Muslims.
The Prophet Muhammad's went to Medina during his Hijrah or long journey from Mecca. Non-Muslims are forbidden from going inside the sacred core of Medina but they are welcome in the city centre.

Here is a few places which are blurred out (above).

We had to research and do a lot of leg work to get this story to sync up and present it in a kind of ok fashion? If you have any information or eye witness stories that you or someone you know has captured on camera or video then we need to see it? Please send us all your stuff to the "Report UFO Sighting page on this website, thanks guys you all make this worthwhile.

Here's both of our sources of information: