UFO explodes in the night sky over western Russia (Video) 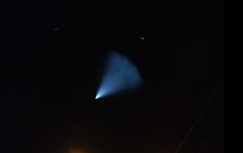