Can You Believe Cuneiform Was Given by Anunnaki Gods

Cuneiform was a sophisticated original written language which one day it didn't exist and yet the next day it was there in full swing with no lineage coming from anywhere and yet it was so sophisticated that this couldn't of just appeared out of thin air or as if by magic? But yet it did and it is? This tells me that this was given unto them by ancient Aliens of which the Sumerians thought that these were Gods and so they wrote their first writing about the Anuna Gods? The Anunnaki Gods. Cuneiform is a written language that for me proves the existence of Aliens and the theory of ancient Aliens bending us to their will and how they intervened in our cultures and our language so that one day they could talk to us and intermingle with us, maybe? Who knows what the predefined destiny will bring us? 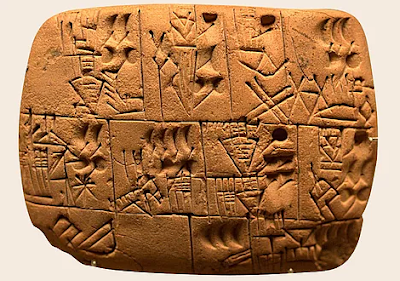 Above: Early photographic cuneiform tablet. These tablets were fashioned from clay, imprinted with a reed stylus by the scribe, then fired to make the hard and permanent records. Tens of thousands of Cuneiform tablets have been discovered in ancient temples and structures thought Iraq and surrounding lands. We have only begun to translate the wealth of knowledge from this original civilisation. Here is what I am calling proof because it is never going to get any better than this, at all? Cuneiform if you don't know is a form of writing which was so advanced for it's era that it has been likened to a turning point in human evolution and yet evolution was never a part in it's own development? One would think that cuneiform was an amalgamation of other writings, phonetics and maybe some other stuff thrown in for good measure you know to make their own "unique" writing system?

Well your wrong? It actually never even existed one day and the next it quite literally just woke up on the desk of the scribes? Well maybe not like that but you get the picture? It never evolved from other writings, other languages or anything else like that? It has been described as just appearing as if  by magic?

It just came into existence and was used to document the age of the Anuna gods, their offspring, the development of the Sumerian civilisation, Sumerian culture, commerce and the wars that may have ended the reign of the Anuna. Is this enough to pique my interest? You bet it is! It should be enough to get you interested because that my friends never happens? This has got to be a unique invention? It didn't evolve from other writings and it didn't match any known styles... Mmh, I wonder if the ancient Gods of Anuna were the one's which gave the Sumerians this marvellous ability and this super wonder of the ancient times?

Well I am a one horse race kinda guy so i'm putting all my money on the fact that Aliens gave the Sumerians this writing and that they like any being wanted the first chapter about them, which the Sumerians obliged as they would and should and started writing about therm? Open and shut for me really, or is it? Everything is pointing to this as the intervention by the ancient Gods but could there be more simpler a more down to Earth explanation? 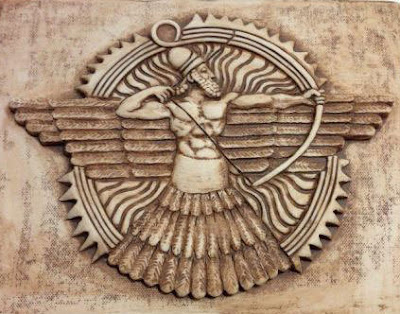 Did the scribes ever keep a diary of their writings and how their writings formed or evolved? Is this the case and am I barking up the wrong tree so-to-speak? Is there something here missing that with my limited knowledge missing? Do you know something I don't or is there something in the history books that you would like to mention? I mean, even I can't possibly research everything can I? I must either be forgetting something here or I am sorta right?

Can you shed some light on this because my suspicious nature is nagging at me that i'm missing something here? It's not deliberate and it could just an overlapping suspicious feeling from the initial suspicion? I do believe in ancient Aliens and the meddling of which I believe they did to steer us humans on a deliberate path so that they could later come back and exploit or come back and trade with us?

Imagine if you will that you have no one to trade with but there's a guy that just needs a start in life? So you set him up in business and give him his first job? You then leave him to his (us being the human race) own devices. You come back a few thousand years later and bam, your looking at a sophisticated civilisation and yes while they might be shocked to see you at first, it then grows in to a beautiful trading agreement of which all they want is someone to talk to, shoot the breeze and trade with? 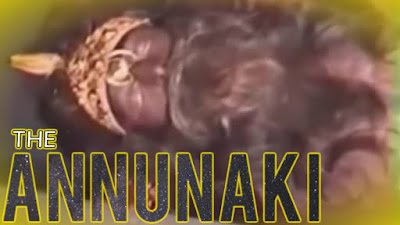 Apparently an Anunnaki God was found alive but in deep stasis in a hidden underground cave and he had been there alive through stasis chamber keeping him alive for thousands of years? We just don't know? Below is a video of the Sumerian Hidden Secrets Revealed At Last?

By the way, we owe them everything!

Our very existence was given to us by them because without writing we wouldn't have a trade agreement! We wouldn't have enough food to feed everyone and if you don't agree with that then well I don't know what to say? Everything has come from the abilities of man being able to communicate through written language like the internet, it's a complex written form of language? Look back in history and you'll find that without written language none of today's bounty would of been possible "arguably"?

I could be wrong about ancient Aliens but the Anunnaki Gods, well they sure as heck came in to existence in a very, very mysterious way?
The invention of writing by the Anuna is described in a cuneiform clay tablet that was translated as shown below:

Enmerkar and the lord of Aratta: c.1.8.2.3 His speech was substantial, and its contents extensive. The messenger, whose mouth was heavy, was not able to repeat it. Because the messenger, whose mouth was tired, was not able to repeat it, the lord of Kulaba patted some clay and wrote the message as if on a tablet. Formerly, the writing of messages on clay was not established. Now, under that sun and on that day, it was indeed so.

The lord of Kulaba inscribed the message like a tablet. It was just like that. The messenger was like a bird, flapping its wings; he raged forth like a wolf following a kid. He traversed five mountains, six mountains, seven mountains. He lifted his eyes as he approached Aratta. He stepped joyfully into the courtyard of Aratta, he made known the authority of his king. Openly he spoke out the words in his heart. The messenger transmitted the message to the lord of Aratta. 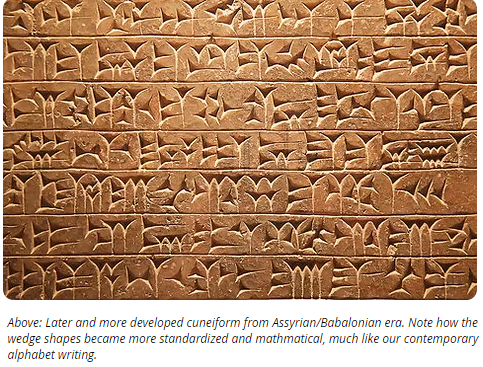