Researchers bring teenage girl from 9,000 years ago back to life

The lost face of a teenage girl from over 9,000 years ago? This is an astonishing feat of human ingenuity and self abilities which have evolved from clay modelling to drawing and statues to reconstructions based on actual, real and exact science? This is blooming spectacular and lost on a lot of people? Here's an online post that has spoke about this, it's awesome to get another perspective? 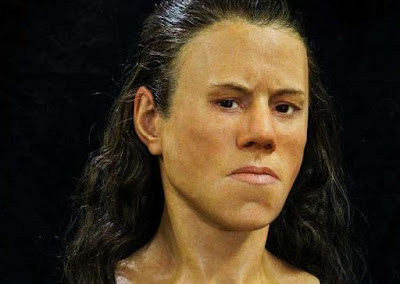 A team of researchers with the University of Athens and a Swedish archaeologist has reconstructed the face of a teenage girl from the Mesolithic period whose remains were found in a Greek cave. They have publicised their efforts by showcasing their work at the Acropolis Museum.

The young girl's remains were found in 1993 in Theopetra Cave in the Thessaly region of Greece. They were dated back to approximately 9,000 years ago, which, the researchers note, puts her at a time when humans there were transitioning from hunter-gatherers to farmers—the dawning of civilisation. It was for that reason the team named her Dawn, which translates to Greek as Avgi.


The researchers believe she was between the ages of 15 to 18 years old (based on teeth and bone samples) when she died of an as-yet an undetermined cause. They determined she suffered from anaemia, scurvy and joint ailments.

Ancients came in every size, literally!

The reconstruction team was made up of a neurologist, endocrinologist, orthopaedist, orthodontist, radiologist and a pathologist, all from the University of Athens along with Swedish archaeologist/sculptor Oscar Nilsson. To reconstruct the face, the team started by scanning the skull and printing it out using a 3-D printer. They then glued pegs to the printed skull to show how thick the flesh was supposed to be in different locations. Next, material was added to simulate muscle which was then followed by skin and eyes.

The resulting figure appears stern in nature and somewhat masculine which the team suggests was likely a common trait for the time. They also note that the girl had a protruding jaw, which they suggest was due to frequent chewing of animal skins to make them softer, a common practice of people at the time. The team also added dark black hair and posted the full results on a torso which was in turn set up on a stand to allow for viewing from all angles. The researchers explained at the unveiling of their work that the idea was to give people an idea of what people of the Mesolithic period looked like, which is not much different from those living today.