Is There An Alien Chamber Beneath the Sphinx?

Is there really Aliens buried inside tombs of the Ancient Egyptian Sphinx or is it a made up legend or myth by Egyptians and conspiracy theorists? But there is many, many examples of inconsistancies and many anomalies including the CIA, National Security of Egypt institutions and international Universities running amazing wild stories all including myths, legends and amazing examples of intrigue? Or was this Ancient Alien tomb mystery created to encourage the romanticism of the Ancient past and the mysteriousness of ancient Egypt? There's tons of stuff we know, but there's even more tonnage that we don't know? The parts of the Sphinx we can't legally see are the most interesting and to shut it down in the name of national security, well that just piques my interest big time, how about you?

Now, you can believe or not believe that there are Alien tombs under the great Sphinx of Egypt but there is one thing you can't deny and that is the real mystery of the place?

Many researchers have long proposed that there are many chambers located within the Great Sphinx and below it. Some have even suggested that the mythical hall of records is located right below this mysterious ancient monument.

It is said that the Hall of Records holds the key to understanding our civilisation and the real history of humanity. Then there are even stranger and more "out there claims" that there are even tombs of Aliens under the great Sphinx but this is all yet to be claimed for real as yet? The lack of searching, investigating and investigation leads many to believe that this is because they already know the answers (secretly) so the powers that be over the mystery have put the blockers on any and all attempts to search the Sphinx or should I say below it? It's crazy but the fact is that it is so?

No one seem's to want this place searched so we have to go with early photographs and early testimonies and possible eye witness accounts of what is either in there or under there? 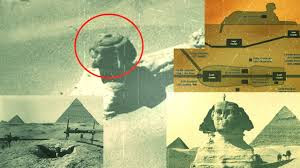 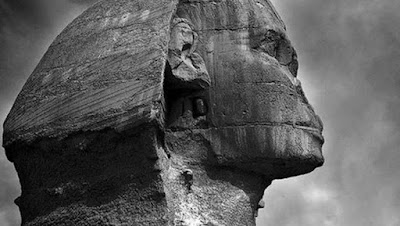 Under the ear of the Sphinx (which was a "Dogs head" initially by the way many, many years back)

RIGHT, NOW THIS IS SOME SERIOUSLY WEIRD STUFF:

Note the opening on the top of the head in photograph #1. Many initial reports of the Sphinx included details of 3 or 4 openings around the sphinx leading to complex tunnel systems, containing tombs with alien artefacts. Something within these tunnel systems prompted the Egyptian government and even the CIA to step in and restrict access on the grounds of quote, the nations security.

The Nations Security, which nation are they on about? Egypt's or the United States? And further more since when has the CIA been remotely bothered about Egypt's national security? So right there, right there is the red flag which is the smoking gun also that begs people to investigate further?

The CIA stepped in and stopped it's own official's of Egypt from investigating any further? They blocked up any doorways, hidden openings and any other openings that lead to somewhere that had stuff they just didn't want anyone seeing? Well, that get's my interest even further and so now i'm fricking invested! It's either a load of gold, like ton's of it or Alien artefacts? But we know there was no gold so it's the Alien toothbrush and Alien fish tank!

But it's a good conspiracy theory because this is history and not some stupid TV crime show which is fabricated, story and myth? This is real tangible history, it is sat right there in Egypt and all it takes is someone with ball's the size of Red Rum's to go up there and just waltz in like they own it? I'm thinking the cultural affairs office in Cairo maybe?

What you think I meant a member of the public? They wouldn't get anywhere near it! It's going to take a good linguist and a determined mind with forceful intentions i.e to get in the Sphinx - who doesn't take any of the B.S from the other puppets from the U.S?

So here's a piece from CatchPenny.org which states:

The idea that there is a chamber beneath the Great Sphinx at Giza likely has its roots in antiquity. In his Natural History, Pliny wrote:
The inhabitants of the region regard it as a deity. They are of the opinion that a King Harmais is buried inside it... (Book 36 XVII)

You see they (the locals) believe that there's a King buried inside of it (the Sphinx) and not an Alien? So something or someone was buried inside it and that's quite literally from the horses mouth, of sorts? It's Cayce who believes and talks alot of there been a Hall of records under the Sphinx in Egypt? If there's one thing about the Sphinx is that it has been changed over the years with a varied degree of attempts to save something of it be it either the shape, size or the insides?

The changes were likely to have been the actual shape of the head because experts say a Dogs head would of been a far more likely intended for the head because that's how it's depicted elsewhere instead of it been a human head, and further more a Dogs head would of sat perfectly in the place of what is there now? The head that's there now is way to small and look's it could of been shaped from an original Dogs head? Now that's the million Dollar question?

NOW THIS IS INTERESTING RESEARCH WE FOUND AND READ CAREFULLY:

The Rosicrucians seized the idea of a secret chamber as a place of initiation. (For more information and diagrams of their "Subterranean Hall," see The Rosicrucian View.) In more recent years, the theory of yet undiscovered chambers in the area of the Sphinx has been popularised by authors quick to criticise "mainstream" Egyptologist's.

In their book The Message of the Sphinx, Graham Hancock and Robert Bauval report on the use of modern technology to investigate the ground surrounding the Sphinx:
These projects were channelled through well-established academic institutions - the Ain Shams University in Cairo and the prestigious Stanford Research Institute (SRI) in the USA. In 1977 the US National Science Foundation funded a project at Giza again involving the SRI. This time use was made of several new techniques such as resistivity measurements (from metal rods driven into the rock across which an electric current was passed), magnetometer, and also the latest aerial photography and thermal infrared image-enhancing techniques.

According to the SRI team's official report:
"Several anomalies were observed as a result of our resistivity survey at the Sphinx...
It's interesting to note that there is actual hidden chambers under the paws and under the back part of the Sphinx which gives even more credibility to the Alien tomb theory and as such I am starting to believe this theory even more and as a result it's changed my beliefs which I wasn't expecting and why I am going to post this on my website ufosightingsfootage.uk

Sources of our investigations and our references: