Unprovoked brutal, decisive and scary looking attack on a civil servant or Policeman that was absolutely disgusting! The policeman is doing his job i.e pulling a guy over for not having MOT or tax which is something that is in the public's interest obviously so from the get go, we support the Policeman. Even if this wasn't why he pulled the guy over, it was totally unacceptable to have a guy beating up a Policeman! He's whaling on a Policeman but the public comes to his aid in a very good Honorable move by them! Liverpool is disgusted by this action. 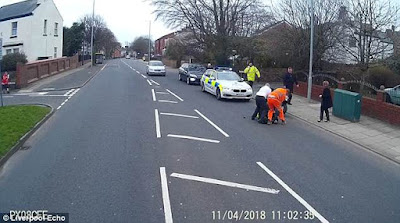 A Police Man was unceremoniously beaten to a pulp in the middle of the road in Litherland, Liverpool, UK just for pulling a motorcyclist over for suspecting he didn't have a valid MOT or road tax? But the suspect did more than produce his MOT certificate, he withdrew his knuckles and begin's to whale on the Police Man just for doing his job (pulling him over was the right choice, and rightly so). The motorcyclist is definitely in the wrong, no arguing!

When a Police Man suspects that you have an elapsed or not at all MOT certificate or no road tax, he's allowed to pull you over, it's his right and it's his job! The Police Officer could get in trouble for "not" pulling him over? If he didn't pull him over it could look like dereliction of his duties, especially if the motorcyclist goes on to crash then who pays for the damage, and the motorcycle comes under scrutiny what with potentially having no MOT or road tax and yeah, the Policeman had an opportunity to get the motorbike off the road? That's why he could of potentially got in to trouble?

So this guy decides to start a literal cage fight in the "middle of the road" without fear, apprehension or knowledge (really) of the oncoming traffic? It is the worst example I've seen of the UK's Police have coined the phrase "road rage" that I've seen in many, many years if not ever?

This guy, wow... This guy need's Prison of which he will probably go to and serve at least 3 years because the Judge and maybe jury (if he denies it) can see from the dashcam video just how brutal this was? You can clearly see the man bringing down his full body weight in every single punch? This is a sustained, unprovoked and vicious attack and he should be banned from driving for at least 10 years if not forever?

Obviously the sentence should have strings attached like sit the actual road safety test again etc? Anger management and definitely an awareness course of some means or another? But that would have to come after his lengthy prison sentence? Plus say sorry to the Policeman? This is a total disrespect of the Police. 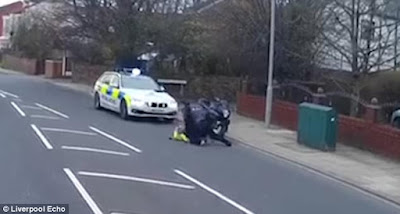 Here's what an Mail Online media newspaper had to say about this unfortunate event:

This is the moment a motorcyclist gets on top of a police officer to launch a series of punches at him. The dashcam footage, captured by a passing driver, was recorded on Gorsey Lane, Litherland in Liverpool at around 11am on Wednesday morning. The incident saw several members of the public rush to the officer's aid, trying to pull the man away.

The police officer, from Merseyside Police's Roads Policing Unit, had reportedly stopped the man because he suspected him of driving without a valid MOT or road tax. A police spokeswoman said the motorcyclist had then assaulted the officer. The footage shows the officer lying on the floor and attempting to defend himself as the man sits on top of him, launching a series of blows.

A man and a woman rush in to help the officer and try to pull the man off him. More people, including the driver recorded the clash and a couple of other police officers, arrive to diffuse the situation. The police force today confirmed a 39-year-old man from Maghull, Merseyside had been arrested in connection with the incident.

The spokeswoman explained: 'At around 11am an officer from the roads policing unit stopped a motorcyclist on Gorsey Lane, as the officer suspected the motorbike was being used without a valid MOT or road tax. 'The motorcyclist then assaulted the officer, before PCSOs and members of the public stepped in.

'The man was arrested on suspicion of assaulting a police officer and other motoring offences. He was taken to a police station and has been released pending further enquiries. 'The officer suffered cuts and bruises and remained on duty.' The incident is the latest over recent weeks in which officers have been targeted.

Following the incident yesterday, Acting Chief Inspector Keith Kellett, from the Roads Policing Unit, said: 'Thankfully the officer was able to remain on duty and suffered only minor injuries, and we'd like to thank the members of the public and other officers who came to his assistance. 'This officer was simply trying to do his job and I'm sure the public would agree that officers who are keeping our roads safe, should not be subject to behaviour like this.'