Potentially the world's first Google assisted find of a real UFO? So who was the (Eagle eyed) person that found this awesome and possibly "history changing" evidence of actual real, tangible Aliens? It was actually a guy from Russia. In fact it was Valentin Degterev from the city of Nizhny Tagil in central Russia. He says he found the UGO (unidentified ground object) online using Google Earth. 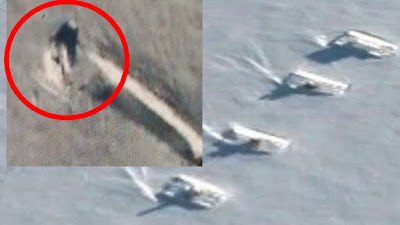 This is just bizarre and one of the most incredible mysteries to have ever come out of the wilderness of Antarctica? Did you know that Antarctica is classed as a desert because so little water falls there? That's interesting enough but this next segment will blow you away just like it firstly made our collective jaws drop then it blew us all away?

Tank's were actually spotted in what seems to be a formation on guard right next to what can only be described as a downed UFO or guarding a UFO crash site? It looks like nothing we've ever seen in the Antarctica region so it stands out most definitely. It can't be a dislodged rock boulder or a piece of ice because the are it is in is flat!

This is what it could possibly look like, a close up of the UFO crash site? If only we had a close up image of the crash site? That would of been excellent. 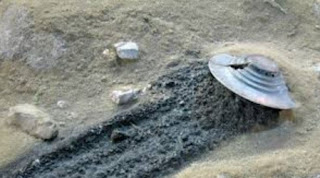 It's as flat as a football field. The fact that there's what seems to be an impression leading up to the unidentified object of where it came to rest suggest heavily that this thing was coming in over the Antarctica region at a steep angle? It looks like it flew to Earth and simply crash landed?
There is a lot more questions that need asking but for now we'll settle with the ones we've just asked? Wasn't there a treaty signed by most major countries that they wouldn't put military equipment in Antarctica? If that is so, somebody has broken that treaty? 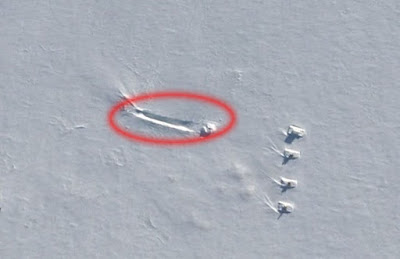 So who was the (Eagle eyed) person that found this awesome and possibly "history changing" evidence of actual real, tangible Aliens? It was actually a guy from Russia. In fact it was Valentin Degterev from the city of Nizhny Tagil in central Russia. He says he found the UGO (unidentified ground object) online using Google Earth.

Fellow researchers have dug out satellite images of the same site, just off Willy Field Road, which were taken in April and December 2011. The channel says it found the pictures which they believe show four tanks in a line facing the strange crack in the snow on Google Earth as if a UFO has skidded to a halt after an emergency landing.

It's interesting to note that other people have actually looked at satellite images from two months before the images with the four Tanks in and guess what? The images from two months earlier STILL shows the UFO with the skid line behind it but no Tanks. AND that for me, as far as i'm concerned is the clincher which has convinced me that this IS THE FIND OF A LIFETIME!

We've found the most significant and historic "new era" and even "new chapter" in life - because of this exceptional find? I maybe talking in profound and words with big meanings but that's because this is more than the smoking gun, or the answer that we (conspiracy theorists) all needed of which we all believed would come? You see, the thing with common sense is that it grounds one and tells me to be cautious but still investigate further? always say and ask the questions on ones mind? One of the questions is this, what happened to this "UFO"?
You see it was Valentin Degterev who saw this on Google Earth first and it was he who broke it to the world so i'm asking this:
The satellite image used by Google Earth was taken on February 15 2012. 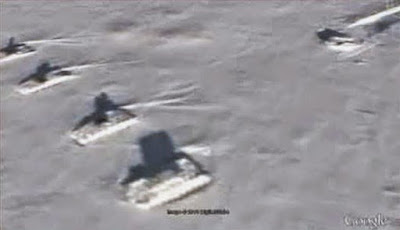 It doesn't matter however you look at this, it will always say one thing in your mind's? It goes like this, wow that's a UFO and there is four definite looking Tanks guarding it? Can you imagine being the first person to discover this image on Google Earth? If it was me I would be thinking this is just to good to be true? Then it would sink in what i've actually discovered and then I would put it on my website, lol. Well done to Valentin Degterev for finding this history changing discovery!