In the US more specifically an ancient Hammer was apparently dug up but inside of a massive rock? It was literally so old that the wood of the hammer was pretty much solid just like stone or the technical term for it is called petrified or turned to stone. So if this is an actual ancient hammer and it's said to be from a very long time ago i'm talking 300 million years ago then this is going to or it must rewrite human history and the timeline of humans need's to be re-examined to include the achievements and that would include iron work, metal work, blacksmiths etc etc. Then one need's to ask if there was an hammer then where's the nails, the other stuff it took to make this hammer and the knowledge, just where did that come from etc? There's ton's of questions and more importantly it raises this question: Were humans and Dinosaurs coexisting with each other just like I put forward in my other video?

The London Hammer (also known as the "London Artefact") is a name given to a hammer made of iron and wood that was found in London, Texas in 1936.

Part of the hammer is embedded in a limy rock concretion, leading to it being regarded by some as an anomalous artefact, asking how an obviously man-made tool could come to be encased in a 400 million year old rock. The hammer was purportedly found by a local couple, Max Hahn and his wife, while out walking along the course of the Red Creek near the town of London. They spotted a curious piece of loose rock with a bit of wood apparently embedded in it and took it home with them. A decade later, their son Max broke open the rock to find the concealed hammer head within.

The metal hammerhead is approximately 6 inches (15 centimetres) long and has a diameter of 1 in (25 mm), leading some to suggest that this hammer was not used for large projects, but rather for fine work or soft metal. The metal of the hammerhead has been confirmed to consist of 96.6% iron, 2.6% chlorine, and 0.74% sulphur. The hammerhead has not rusted since its discovery in the mid-1930's. 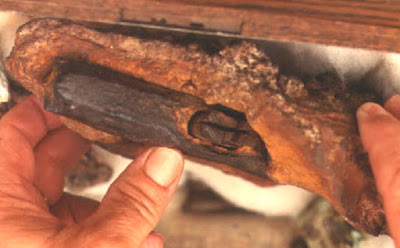 Other observers have noted that the hammer is stylistically consistent with typical American tools manufactured in the region in the late 1800's. One possible explanation for the artefact is that the highly soluble minerals in the ancient limestone may have formed a concretion around the object, via a common process (like that of a petrifying well) which often creates similar encrustations around fossils and other nuclei.

J.R. Cole states: "The stone is real, and it looks impressive to someone unfamiliar with geological processes. How could a modern artefact be stuck in Ordovician rock? The answer is that the concretion itself is not Ordovician. Minerals in solution can harden around an intrusive object dropped in a crack or simply left on the ground if the source rock (in this case, reportedly Ordovician) is chemically soluble.

The Hammer began to attract wider attention after it was bought by Creationist Carl Baugh in 1983, who claimed the artefact was a "monumental 'pre-Flood' discovery." He has used it as the basis of speculation of how the atmospheric quality of a pre-flood earth could have encouraged the growth of giants. The hammer is now an exhibit in Baugh's Creation Evidence Museum, which sells replicas of it to visitors.

Link to our source.

Here's what two people have said about this:

Hiddleston, Jim (20 July 2011).
First of all, there are conflicting reports as to where the object was actually located in the surrounding rocks. And there is no photographic evidence of the object prior to being disturbed. One report states that the hammer was embedded in a rock formation dating from the Cretaceous Period (65-135 million years ago). But other accounts state that Mr. Hahn found the hammer bearing nodule “near” these surrounding rocks.

Sceptics argue that minerals could have cemented the hammer around the Cretaceous rock after it was dropped or left behind. This could easily lead novice geologists to believe that the hammer and the rock formation are from the same time period. The only true method of determining the age of the hammer is through Carbon 14 dating of the wooden handle, but Baugh has yet to authorise this procedure.

The handle appears to be partially fossilized, so this certainly adds to the argument that this a very ancient tool. But fossilisation can occur prematurely through various natural methods. To sceptics, the hammer appears to be a tool that was abandoned or lost some 200 years ago, but to it’s supporters, this is a clear indication that man has been on this Earth much longer than previously thought.

Others have said about this.

Kuban, Glen J. (14 July 2006).
An iron and wooden hammer, sometimes called the "London Artefact" or "London Hammer," found by local hikers in a creek bed near London, Texas in 1936, has been promoted by Carl Baugh and other strict creationists as an out-of place artefact. They maintain that the hammer, which was partially embedded in a small, limy rock concretion, originated in a Cretaceous rock formation (or an Ordovician or Silurian one, depending on the account), thus contradicting the standard geologic timetable. However, the hammer was not documented in situ, and has not been reliably associated with any specific host formation.

Other relatively recent implements have been found encased in by similar nodules, and can form within centuries or even decades under proper conditions (Stromberg, 2004). The hammer in question was probably dropped or discarded by a local miner or craftsman within the last few hundred years, after which dissolved limy sediment hardened into a nodule around it. Although a brief rebuttal to Baugh's hammer claims was made by Cole (1985), Baugh and a few other creationists continue to promote it. This review provides further analysis of the hammer and creationist claims about it. 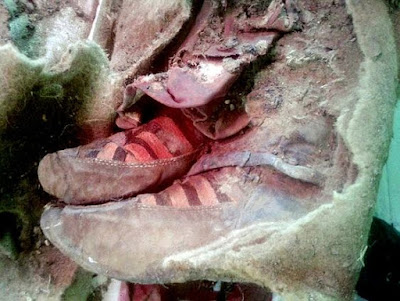 Go check out this amazing story.
Archaeologists in Mongolia are slowly unwrapping the mummy of a suspected ancient woman found preserved in the Altai Mountains. So far only one hand and her feet in modern-looking boots are visible, but experts believe the find dates to around 1,500 years ago. It also appears to be the first complete Turkic burial in Central Asia and the remains were found at an altitude of 9,200ft (2,803 metres).