Floating Nuclear Power Plant (FNPP) Is A Step Forward In Coming Off Fossil Fuels I Believe!

The world's first FNPP or Floating Nuclear Power Plant was invented, designed and created or built by the Russian's who plan to power the port town and oil rig's in Pevek, Chukotka, Russia just near Alaska. This is a massive forward step in the future of renewable energies if you ask me? If one day we ever step away from fossil fuels altogether we will need something that is better, lasts longer and is cleaner? Nuclear power does all that provided it's correctly applied? Well, in an age where quality over quantity is taking off or has taken off then I really don't see this as a problem? If all health, safety, general and unforeseen rules apply then this is the cleanest power, energy out there! I believe that if it's treated right, examined and checks are made often and training, rules, guidelines and all that comes with the looking after and maintaining of a vessel such as the Akademik Lomonosov then everything will be OK! Give it a go... 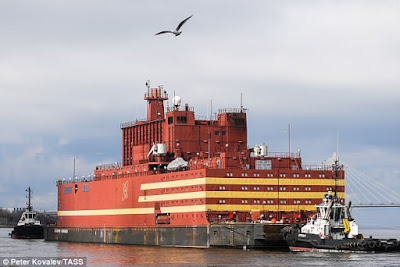 The world's first ship-born nuclear power plant sets sail from St Petersburg heading for the frozen far east as environmentalists rain down thunder and lightning and the wrath of God! They've slammed it as a 'floating Chernobyl' just waiting to happen. This is a first for the world and for the environmentalists so they've never seen anything like this (since) and it's bound to spook them big time what with the failures of the past but admittedly that was technically under the old management of the USSR?

Chernobyl was a disaster on the scale that nobody could of imagined and the evacuation of a full city was a shocking prospect to the western world! Abandoning a full city is pretty rare but the thought of it happening was a scary thing especially for the people living near western nuclear power plants? For instance, living near a power plant especially a nuclear power plant "still" to this day gives one a certain feeling of not helplessness but a feeling of unease, but then it quickly abates and the thoughts of a disaster quickly go because we know that the chances of that happening are slim to not at all?

You see, writing this I can't help but think that I've jinxed myself but knowing just how safe they are helps a lot! They are the safest they've ever been what with the disaster which unfolded in 2011 at the Fukushima Daiichi nuclear power plant every single other nuclear power plant simply went in to overdrive and health and safety was the real buzz word and to this day it still has the feel that they're probably getting even safer? But with time comes the normal and with the normal comes complacency so let's hope that time isn't the killer of a city wide peoples that only wanted to live in safety? 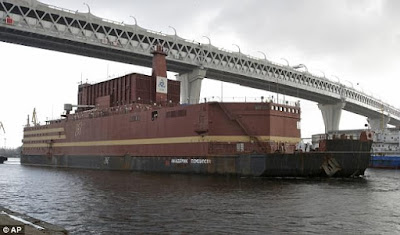 The world's first floating nuclear reactor set sail on its maiden voyage from Russia bound for the Arctic far east. Akademik Lomonosov was on Saturday towed out of St Petersburg harbour where it was built, equipped with two nuclear reactors. The 21,500-tonne ship will be pulled through the Baltic sea and around the tip of Norway to Murmansk, a city of 300,000, to be loaded with fuel.

From there it will continue on to Chukotka, over the straight from Alaska, to power the port town of Pevek and oil rigs when their reactor shuts down in 2019. 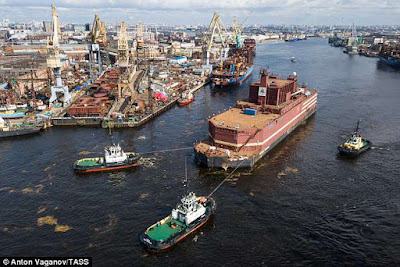 About 45,000 tons of fuel or diesel oil will not have to be used as a result of the plant, according to its manufacturer OKBM Afrikantov. The project is controversial for its potential environmental impacts with Greenpeace denouncing it as a 'floating Chernobyl' and 'nuclear Titanic'.

The world’s first FNPP will be put into operation in the city of Pevek in Chukotka in 2019.
Its main rated characteristics per reactor unit (RU) are: Thermal power: 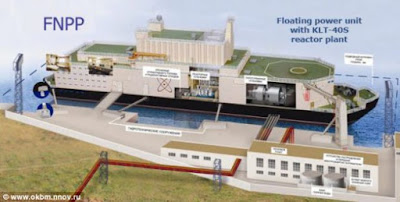 'Nuclear reactors bobbing around the Arctic Ocean will pose a shockingly obvious threat to a fragile environment which is already under enormous pressure from climate change,' nuclear expert Jan Haverkamp said. "The flat-bottomed hull and the floating nuclear power plant's lack of self-propulsion makes it particularly vulnerable to tsunamis and cyclones." However, the ship's owner Rosatom hit back, accusing Greenpeace of not having any evidence to back up its claims. 'Greenpeace hasn't presented any meaningful scientific evidence of any unaddressed risks or any shortcomings of the design which is based on a tried and tested technology with an impeccable track-record,' it said.

'Their attitude towards nuclear power has been widely criticised by independent scientists as patently biased and hardly scientific.' 'FNPP features the most cutting edge safety and security systems and is expected to be one of the safest nuclear installations in the world.' Russia has at least another seven floating nuclear reactors planned and China is working on building its own to launch in 2020. Other countries like Algeria, Indonesia, Malaysia, and Argentina have shown interest in hiring ships that could become available as more are built. They are considered very effective for generating electricity in remote areas and can be moved on if not required, or be used to power desalination plants. 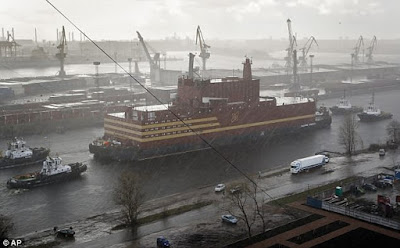 So, is this sea going ship (without propulsion) and capable of producing vast amounts of power capable of surviving a Tsunami or a mega storm? I suppose but with a lot of hesitation that "we'll have to wait and see"? And guy's that's not an "I told you so" but a let's take the word of the scientists! When they say it's safe, then it's safe right? I mean even the Russian government don't want a disaster and they definitely don't want to just waste money by cutting corners do they?

That's in nobodies interests and it goes against making profits so I say, give this one a chance to prove itself because anyone can claim anything and say anything but without anything to go on and to just say these things out of nothing but feeling scared and hesitation and the feeling of helplessness because of the unknowns, well we should take a leap of faith and trust them!

That's my thoughts and opinions right. Give them a bit of credit for pushing the envelope in what is possible and the unknowns? They have taken a risk I admit to that but it is one worth taking because when one thinks of the possibilities and the potentials of where this can bring power to and for long periods of time if not replace fossil fuels and help in situations where all else fails then this can be used for good and to help people either build or rebuild?

Infrastructure
The FPU provides accommodation for 70 people (crew) in comfortable single-bed compartments. For meals, recreation, sports and everyday services there is a dining room for 60 people, lounge, conference room and information center, library, smoking room, sports complex (gym, fitness room, swimming pool, sauna and steam bath), lounge with bar, hairdresser, shop, laundry and everyday services room.
There are also galley and food premises for cooking and food storage, and and on-board first aid clinic. Thus, if necessary, the FPU can work far from any populated settlements. The FPU is designed to work as a part of the nuclear and thermal power plant, and provides a rated power supply to coastal networks of 60 MW, and 50 Gcal/h of thermal energy to warm up the heating water.

In various modes of operation, the FNPP can transfer to the consumer from 44 to 70 MW of electric power and from 50 to 146 Gcal of heat.

Advantages
The advantage of a FNPP is that it can be factory built, and then delivered around world to the point of use by sea. The FNPP is also particularly suitable for locations where there are no other sources of electricity and thermal power. Housing the nuclear and radiation components on the FPU, which is the major part of a FNPP, allows the realisation of the “green lawn principle” i.e. other FNPP components such as on-shore and hydraulic structures that provide mooring and heat and power transfer to the consumers are not contaminated during operation. The FPU is built at the manufacturer’s shipyard, which allows a significant reduction in the construction time of the the nuclear power and thermal plant, and also provides quality control and compliance with the technology requirements. The main advantages of a FNPP compared to the construction of an onshore nuclear power plant of the same capacity are:


Sources of our research:
# one Dailymail
# two ee Publishers