Artefacts With Extraterrestrial Carvings And Engravings Found In A Mexican Cave

Here is some very convincing evidence for the existence of Aliens in our history? A cave in Mexico has given up it's long secret artefacts and what a real treat they are! There are mini sculptures, statues of what can only be described as Alien Greys with tear shaped eyes that are on a weird looking Alien Grey head that is clearly way to big for it's body. The classic shape that modern man has given to what an Alien Grey looks like.

Mysterious artefacts with engravings of "extraterrestrials" and "Nacelle" unearthed in a Mexican cave  is just mind blowing stuff and is next to incredible if you was to ask my opinion based on the evidence, the story and the actual statues themselves I can't help but get a little excited.

The prospects that this could literally change our history as we know it, but for the better and for a clean out of the lies, contradictions and other shady recognition from dubious sources? 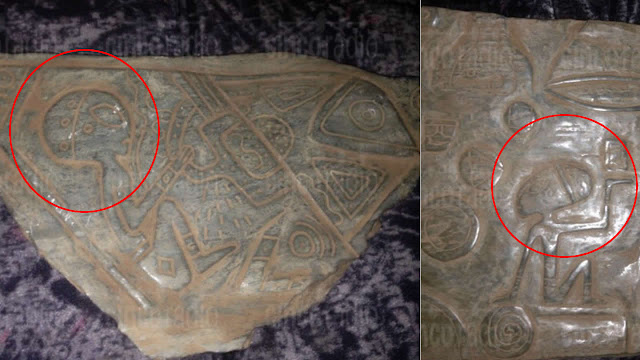 A group of explorers discovered in a Mexican cave evidence of what they boast to be the best evidence of extraterrestrial contact on Earth. The group of explorers recently visited the cave and explored it in detail. In two cases, the researchers made unexpected discoveries, including several stones sculpted with images depicting etchings related to extraterrestrials. On the surface of the stones, the group of researchers found evidence of what many people interpret as "extraterrestrial spacecraft" and "humanoid beings"; One of the stones, apparently fractured in the past, evidently shows the top of a spaceship with a being that some people believe is not of this world. 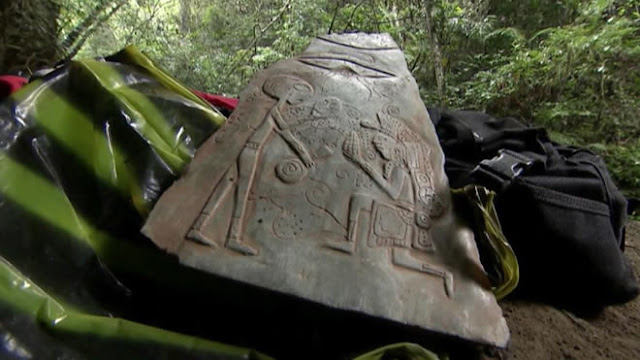 The painting shown here contains an alleged alien who is next to a former leader of a prehispanic culture who receives a corn seed, as well as some other symbols that have not yet been deciphered; these artifacts have been nicknamed "stones of the first encounter".

It is said that local legends speak of a mysterious "ship" that has been hidden somewhere near the caves since time immemorial. This is the main reason why the group of explorers searched the area three months ago.

His research yielded totally unexpected results. They found what they believe is the ultimate proof that the aliens visited the Earth thousands of years ago and that they had direct contact with the ancient cultures that inhabited Mexico at that time. What the discovery suggests or what implications the group of explorers will have to see. José Aguayo explained how the INAH - National Institute of Anthropology and History - can not say anything about the discovery because it is not a typical archaeology for a main reason; the artifacts describe things that contradict the dominant story and differentiate everything we have been told about our history and origins.

If, at some point, the National Institute of Anthropology and History decided to collect the artefacts, it would have enormous implications for both parties since INAH, an official government agency, would essentially accept one of the most important "facts": the existence of beings. not earthly, they have directly influenced the ancient cultures of the whole world.

The story can be found in two places here in Spanish and here in English.

Here is another bit of research that I found online and guys it get's even more stranger and stranger because of the look of these incredible statues? I must admit that I wasn't them mini statues having the look of an Alien grey? That absolutely threw me for six! The classic look of the big tear shaped eyes and the big head with a small mouth, that is the look these mini sculptures, statues have. I mean, they even have a mini baby Alien grey in the arms of the "mother Alien".

Here is a quote from the Daily Star.
Other sculptures appear to show spaceships flying through the air. The mystery objects are reportedly popular among locals who live near the caves in an unspecified area of Mexico. 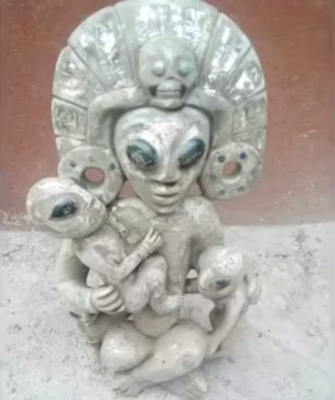 Very old statues could be up to 7,000 years old some top researchers have claimed?

In this next stone is a really, odd looking and very, very bizarre engraving of what can only be described and called a UFO? You just have to look at it in full, take it in and you can see exactly what the person who engraved this stone was trying to tell us? That Aliens are real and we've been contacted by Alien in our ancestors past? It is up for grabs and up for debate but here is a tangible, physical proof of the legend, story so that for me is as good as any evidence which quite literally proves it. 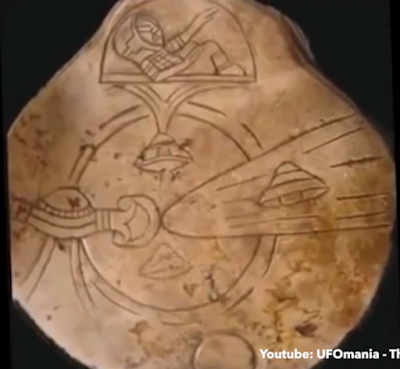 UFO MANIA - The Truth Is Out There YouTube Video link can be found here:

I've found some amazing images from the actual cave in Mexico and there is overwhelming evidence of Aliens who (at one time) visited Earth and who knows, they may of even influenced the concepts of ships, trade and the exchange of ideas among each other knowing the route humanity would take. 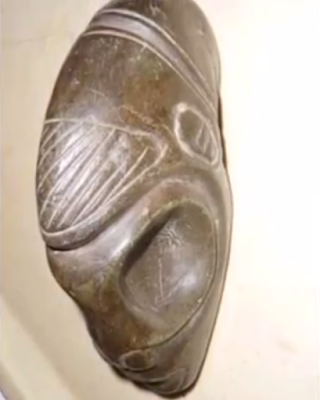 So yeah, everything since the first contact could all of been known in advance because of the Aliens known information that once a species is enlightened to trade, travel and intelligence of inventions and numbers then the route taken is pretty much mapped out already? Who knows, the Roswell crash might of been the time when sophisticated and extremely small technology was introduced to keep us on track and stop us from killing each other in more wars like world war one and world war two?

It's pure speculation but my opinions could of happened and they might of been slightly different but not a lot because all I need to do is take away the Alien element and the rest of what I said pretty much happened like I said! So don't be quick to shrug it off because just because I said the Alien word that doesn't mean it is all rubbish from then on wards?

The supposedly ancient sculptures have sparked claims that aliens visited earth thousands of years ago. Maybe they did because if this was to represent a human at that time, this would be rejected as not looking anything like a human? So it begs the question, is this really depicting a real Alien visitor because maybe these people never depicted other humans in their artwork and only their Gods and them being the visiting Aliens. 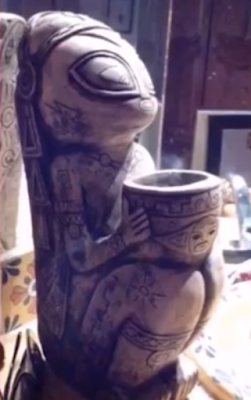 That looks uncannily similar to an Alien as we would say they look in today world? Maybe they look like this and it's an innate thought that we all have inside of what they look like?